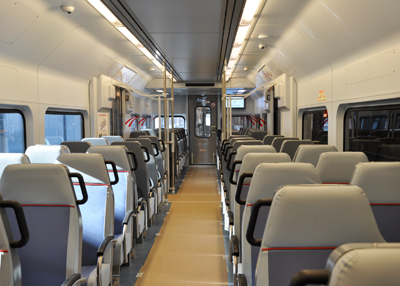 PATCO plans to conduct functional and on-track evaluations of the two prototype cars, along with six others yet to arrive from the Alstom assembly facility in Hornell, N.Y. The agency will then introduce the cars into revenue service and use them as templates for the rest of the production run, which is scheduled for completion by the end of 2016.

The railcar overhaul project is expected to cost about $194 million, approximately $70 million of which will be funded with federal dollars. The project is largest rolling stock capital expenditure since PATCO’s inception in 1969 and one of the largest capital improvement projects in DRPA (Delaware River Port Authority) history.

In 2012, PATCO separated 26 cars from their undercarriages and transported them by truck to Alstom, where they were stripped down to their steel outer shells and rebuilt from the outside in. The two newly refurbished prototype cars arrived in Lindenwold on the weekend before Thanksgiving.

The cars also have a new wheelchair and bicycle parking area with flip-up seats. For greater security, a new passenger alarm system includes an intercom that allows passengers to communicate with the train operator. The cars also are equipped with interior security cameras connected to an externally accessible DVR.

The cars also include a number of new communications systems: a new public address system with automatic announcements; a noise-sensing microphone and better speakers; external speakers where announcements made from the train can be heard on the platforms; scrolling exterior destination-and-route signs; and a video advertising and infotainment system.

“Our first cars have come home for the holidays, and they look great,” said PATCO General Manager John Rink. “They’re bright, spacious, gleaming, and furnished with new equipment that promises to make PATCO travel more comfortable, reliable, and secure than ever.”

PATCO entered passenger rail service in 1969 with 75 railcars manufactured by Budd. In 1980, PATCO added 46 cars made by Vickers. Both classes of car are scheduled for overhaul.