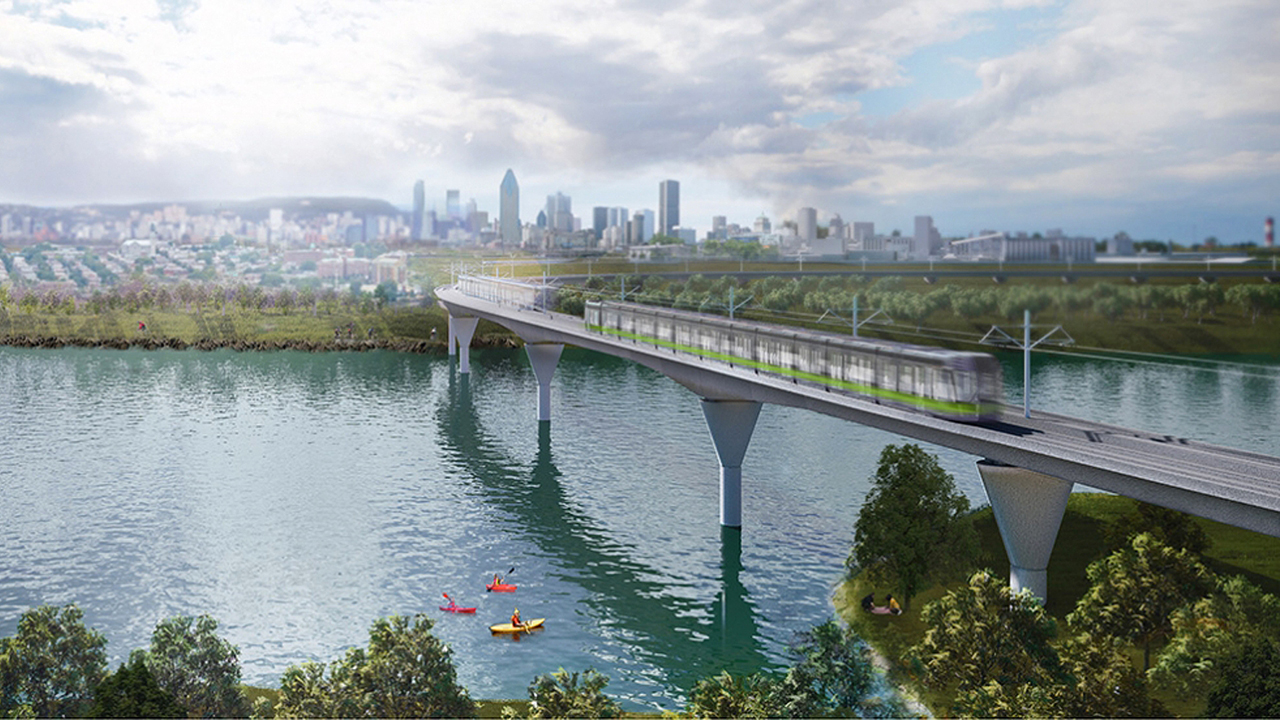 RAILWAY AGE, NOVEMBER 2019 ISSUE: In the fifth installment of our ongoing series on transit-oriented development (TOD), we’ve focused on Montreal. Our previous articles looked how New York got TOD right, how California is doing something different, the key role P3s can play in booming Toronto, and Chicago’s TOD experience.

Montreal might be fondly known as Canada’s cultural capital, with Instagram-worthy historic streets, a global reputation for arts and festivals and a seemingly endless supply of cuisine that always inspires. However, its status as a cultural powerhouse is owed primarily to the importance Montreal holds as a trade port for Canada. Situated as the most inland port of the Saint Lawrence River, Montreal was long the transfer point for Atlantic passengers and goods to continue their journey further west, and was established as a key global trade port as early as the 17th Century.

From early settlements to today, Montreal has always been a global leader in trade, transport and design. This includes all things transit. At one time, it had four major train stations operating, connecting local, regional and national rail lines to the Port of Montreal—at one point the largest grain port in the world. The Port continues to play a strategic role in ensuring Canadian farmers can get their produce to market.

The city’s historic status as a port and a hub has an enormous influence on its approach to transit and development today. The best place to start the story is the 1960s.

In the 1960s, Montreal witnessed massive progressive changes, including the institution of welfare systems, secularization from the Catholic Church and a commitment to providing transit to the citizens of Montreal. This period, called “The Quiet Revolution,” was accompanied by the construction of the Montreal Metro system.

Opening fully in 1967 with 16 kilometers (9.9 miles) of track and 26 stations, the Montreal Metro was the first metro system in North America to operate on a rubber-tire system. Today, the Metro operates 69.2 kilometers (43 miles) and 68 stations. Its construction coincided with the 1967 World Expo, which highlighted the cultural and economic influence of Quebec and Canada to the world. The innovative Metro system connected inner-city Montreal to Jean Drapeau Island, where the Expo was held.

Due to Montreal’s compact development patterns, much of the island could be considered a transit-oriented development. During the construction of the Metro, care was given to the existing neighborhoods of Montreal, ensuring that the rail system was built in the least obtrusive way possible.

Innovation was key for the development of the Metro, which saw one of the world’s first art-in-transit programs. A national competition was held for Canadian architects to design each station. This resulted in the unique designs that are a hallmark of the Metro, using common construction elements (concrete, tile, brick).

Today, Montreal Metro has the highest ridership per capita in North America next to New York City, and continues to grow in ridership. This spike in popularity has created an urgent need to alleviate overcrowding and seek transit solutions region-wide for a more balanced approach to moving people. This has challenges. While the City of Montreal has a robust network of transport options, the region’s suburban offerings are much more limited, which has contributed to the annual growth in automobile ridership, highlighting the urgent need to provide other transport solutions.

Old Montreal Vs. The Suburbs

While classic pictures of Montreal depict old-world winding streets and quaint walkable neighborhoods, outside the inner-city ring a different story is told. Post-WWII suburban style development prevalent in other North American cities exists in Montreal as well. Communities on the north shore like Laval and the series of communities on the south shore from Longueil to Brossard and beyond accounted for the highest growth areas of the region from the 1960s onward. The low-density-built form across the region has continued, but beginning in the 1990s, the provincial government began a series of measures to address growing concerns of traffic, loss of prime agricultural land, efficiency in local governance and a more regional approach to growth.

With the forced amalgamation measures in the early 2000s, and subsequent de-amalgamation referendums, Montreal’s region had not been focused on regional transit initiatives until recently. These new initiatives are designed to address growing traffic congestion concerns, as well as meet Quebec’s greenhouse gas reduction goals and continue the preservation of agricultural lands surrounding the regional planning area. They have resulted in creative solutions to delivering better transit service to current and future residents of the region.

Compared to other Canadian markets like Toronto or Vancouver, Montreal’s growth is only beginning. The momentum Montreal experienced from hosting Expo and the 1976 Olympics was stymied by a series of political initiatives, from French language and cultural protection requirements in the 1970s, to a referendum to separate from Canada that barely failed in the 1990s. As a result, investment in the province remained minimal from outside forces. Housing stock has stayed near constant since the 1990s, with increases only amounting to organic growth.

Beginning in 2013, a renaissance in business investment in the province has led to consistent job growth, and the province now enjoys budget surpluses for the first time in decades. Innovation industries like video games, movies and the growing field of artificial intelligence has resulted in a global talent recruitment campaign to fill these new jobs. These new industries, combined with demographic shifts seen globally, have resulted in growth in housing investments and new office development.

It’s important that transit investment keeps pace with development pressure to accommodate these new intensive urban nodes across the region. Innovation has been a cornerstone to these new initiatives, thinking beyond both traditional financing models as well as technology.

After decades of stalled or minor transit improvements, a new movement of investment began in earnest in 2015 when Quebec’s pension fund, Caisse de dépôt et placement du Québec (CDPQ), agreed to begin using its financial clout to invest in major transportation projects within Quebec, utilizing up to C$7.4 billion of pension funds set to be issued between 2014 and 2024.

Their first project to invest in is an ambitious sprawling rail project called Réseau Express Métropolitan (REM), which will introduce a 67-kilometer (42-mile) autonomous rail system providing rapid all-day service to many parts of the Montreal region. REM will not only interface with the Montreal Metro and regional rail, but also connect to the Central Train Station, link up with VIA Rail’s national rail service, and add a long-desired connection to Montreal International Airport from the downtown in less than 30 minutes.

CDPQ’s funding scheme provides 51% of the funding of the capital line plus operation expenditures for 30 years. To recoup this investment, a 10% development charge to new construction within 1 kilometer of each REM station will be assessed.

Quebec’s visionary approach provides a foundational opportunity to tackle many provincial priorities. These include meeting climate mandate goals, alleviating regional traffic congestion and providing better housing choices. This approach establishes a “made in Quebec” strategy that employs thousands of Quebecers to design, build and operate the new system, and provides a solid return on investment to pensioners of Quebec. (Full disclosure: Stantec’s transportation team is working on the project.)

CDPQ’s funding strategy has greatly reduced the amount of time a major transit project can be implemented: REM went from concept to construction in less than three years. Provincial and federal funding is greatly reduced or relied upon to green-light projects of this scale and scope, which traditionally would take a decade or more in planning and approvals by government.

Once complete, the REM will have 26 stations and a projected annual ridership of more than 69 million.

Other initiatives to improve the region’s transit offerings has gained interest by elected officials. Montreal Mayor Valerie Plante’s 2017 campaign centered on the creation of the C$6.7 billion Pink Line, which would connect Montreal North to the Southwest neighborhood of Lachine, filling a major service gap in the Metro. The provincial government has recently agreed to study this important transit connection as part of a deal to help fund the Quebec City tramway. In addition, the City of Montreal has secured funding to add five stations through the Blue Line Metro extension and is currently implementing its first BRT (bus rapid transit) line along Pie XI Boulevard. The city has also approved a 10-year transportation strategy that aims to provide a more balanced network in the downtown core, providing guidelines on how to implement bike lanes, pedestrian and transit amenities in strategic ways.

Off the island of Montreal, Réseau de Transport de Longueuil (RTL) has envisioned a tramway project along the major corridor of Taschereau Boulevard. Stantec’s Urban Places conducted the business case for this 15-kilometer project in 2018, providing a new approach to funding justification. Studies along the corridor focused on a foundational understanding of development potential in terms of land availability, probability of redevelopment and potential of those lands for redevelopment over 30 years.

The current provincial government is looking to innovative transit strategies to ensure rapid implementation of transit that contemplates future growth and accommodates the growing needs of residents in the region. Projects like the Taschereau Tramway offer paths to implementing rapid transit solutions quickly and give municipalities direction on where to focus development in the future.

The confluence of renewed transit commitments from provincial and federal governments, key climate change mandates, changing demographic tastes and the increased need to reduce traffic congestion has resulted in a transit renaissance in Montreal. While downtown’s well-established transit initiatives are celebrating 50 years of service, the suburban communities are beginning their journey to establish walkable, transit-focused nodes. Montreal’s regional planning agency, Communauté Métropolitaine de Montréal (CMM), recognizes the growing importance to get suburban intensification right. The agency is funding C$1.3 million in planning at 13 priority station areas that will help deliver thousands of new homes, places for new jobs and services to residents of the region. This work helps communities establish the role of the transit station, and outline the opportunities and constraints to delivering TOD.

Montreal is not alone in this approach. Regions like Denver have employed regional planning to TOD, to help ensure that land is being used effectively around station investments, and even to create the business case to funding partners on the return on investment.

The region of Montreal’s approach includes a look at all local, provincial and federal agency goals that can be achieved through transit investment and TOD policy. The consideration of the development industry is key too. Many developers have recognized this growing trend and have initiated their own TOD programs on lands adjacent to existing or planned transit. Coordination of these efforts will require a keen eye on interface and integration with the transit investment, as well as first/last-mile connectivity.

At the core of Montreal’s transit renaissance is a foundational appreciation for innovation and quality design. This ethos is essential to quality transit investment and TOD, and will deliver the results desired by all municipalities in the region from small suburban towns to the historic streets of Old Montreal. By rewarding projects that meet a holistic set of government priorities, desired design outcomes and consumer preference, the future of the region of Montreal will be more urban and more connected.

Steve Potvin is a senior urban planner based in Montreal and a Principal with Stantec’s Urban Places practice, a network of experts that provides professional services focused on public-realm and private development strategies for clients across North America. He is currently leading several TOD and transit corridor planning studies throughout Quebec.

Craig Sklenar is a senior urban designer based in Montreal and an Associate with Stantec’s Urban Places practice. He has worked on numerous TOD-related projects across North America during the past 15 years, and currently is leading the urban design of several TOD and transit corridor projects in Canada.