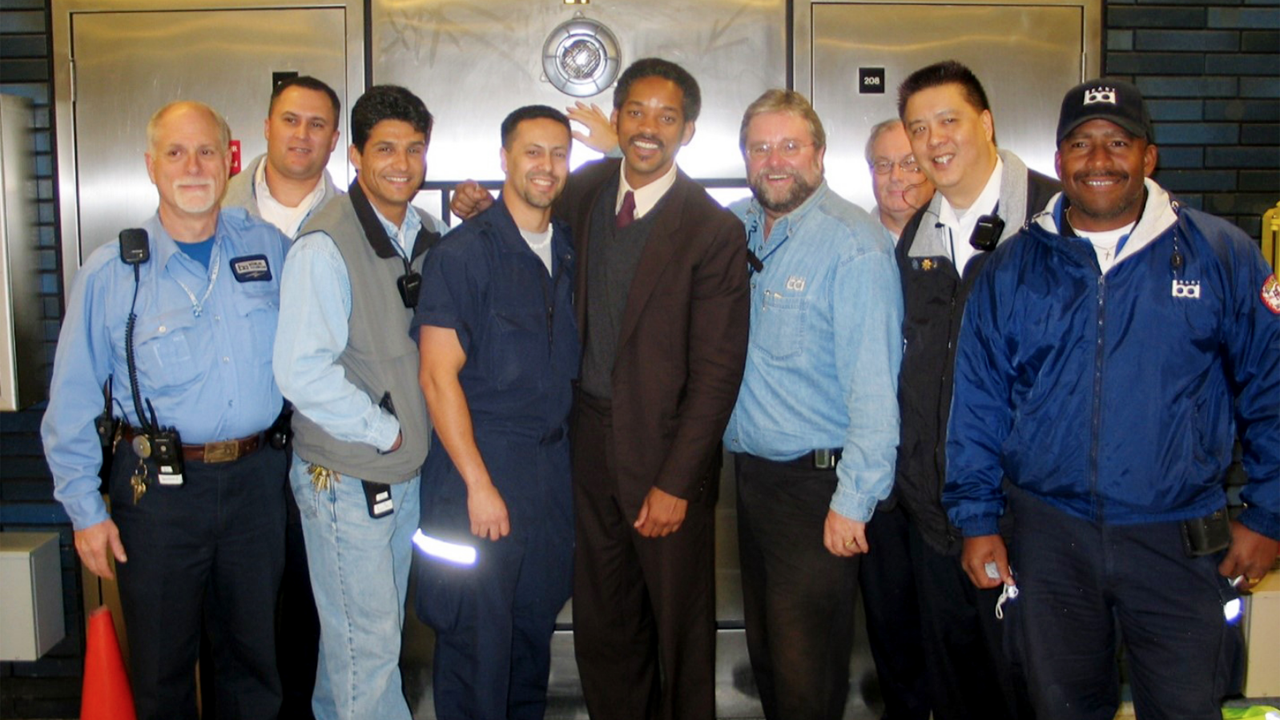 Actor Will Smith with BART employees on-set of “The Pursuit of Happyness” in 2005. (Caption and Photograph Courtesy of BART)

There’s an early scene in 2006 hit film “The Pursuit of Happyness” in which Chris Gardner, played by Will Smith, races to catch a San Francisco Bay Area Rapid Transit (BART) train with the bone density scanner he’s hawking. Gardner makes it on the train, but the doors slam shut on his hand that holds the prized scanner.

The scene speaks to a hidden army of BART employees buzzing behind-the-scenes because of how difficult it was to get the doors to close at the precise moment and to have the train move when the doors were blocked from closing, which won’t typically happen. Everyone was dedicated to ensuring the director’s vision—and Gardner’s inspiring story—made it to the silver screen.

Based on the true life story of Gardner, a salesman struggling to raise his son (played by Smith’s real-life progeny Jayden Smith) and make ends meet in San Francisco, “The Pursuit of Happyness” pays proper homage to its Bay Area setting. BART serves as both a setting and character—an active backdrop that invigorates the heart-wrenching drama.

The “Pursuit of Happyness” crew shot on BART property for 17 days (the infamous bathroom scene was shot on a soundstage in Alameda), between Oct. 1, 2005 and Nov. 20, 2005. The crew, with ample assistance from a team of BART employees, filmed at 12th St./Oakland, 19th St./Oakland, Powell St., and Balboa Park stations, as well as the Hayward Maintenance Complex.

In addition to commandeering trains for the shoot—with heavy supervision and safety checks by BART staff—the production paid BART to age some of the stations in reverse. BART swapped out contemporary advertisements with those from the early 1980s, changed the system maps, and even brought back old station personnel uniforms.

“The astute viewer will notice there are two things in the movie that weren’t around in the ’80s,” wrote an External Affairs employee after filming. “First, the seats. The crew was going to replace all the blue seats with brown ones, but we couldn’t find any, unfortunately. Secondly, the #1 Transit System in America logo. The movie was shot right when we received that award, and all of our trains had the #1 logos on them.”

Despite these small inaccuracies, if you look closely at the background in BART scenes, you’ll notice period-correct advertisements, such as those for Perry’s Diner on Union Street; Erlanger beer; and the notorious movie “Blue Lagoon,” released in 1980, one year before the film is set.

Because the production needed daylight, it filmed largely during revenue service hours, meaning real-life passengers would find themselves stepping into a station and back in time to the 1980s.

“We basically had to work around revenue service,” said BART Principal Engineer Otto Gonzalez, then a Senior Construction Engineer in Transit System Development (now called Planning and Development). “People would try to get on the filming train, and we’d have to say, ‘No, no, this is not a revenue train.’ You had to keep it on the ball.”

Gonzalez remembers “super long” shoot days, sometimes lasting up to 16 hours, and actively trying not to “ogle” the celebrities—including Tom Cruise and a pregnant Katie Holmes, who visited the set during a shoot at the Hayward Maintenance Yard.

Now retired, former train operator and test track operator Greg Gomes was one of the lucky people who not only got to meet Cruise, but snap a coveted photo with him.

“I’m six-foot-two, and Tom’s not a very tall guy. He stood up on the curb and told me where to stand,” Gomes said. “I was kind of laughing. He even asked me to crouch down a bit.”

Gomes, who operated the trains in some scenes, made a buddy on set: the then pint-sized Jayden Smith, who, like any little boy, loved the trains.

“What a kid,” Gomes said. “I really enjoyed hanging with him. Sometimes, he’d just walk the whole train with me. He kept saying, ‘This is a long walk.’ He was very interested in the electronics, what we see out of the front of the train.”

But like any young actor, Jayden Smith sometimes fumbled his lines.

“I can’t tell you how many times they stopped filming because he forgot his lines,” Gomes said. “Or the cue cards were wrong. Or somebody tripped over something. Or someone’s in the shot. You could see the director getting visibly mad.”

As for the scene where Will Smith’s hand gets stuck in the door—that was highly, highly choreographed with BART’s help, Gonzalez said.

“It wasn’t as easy as it sounded. A lot of time, these guys were asking things that were just really demanding,” he said. “We had to do things we normally didn’t do, but we always did it in a safe manner.”

It wasn’t a given that BART would get involved with “The Pursuit of Happyness” at all. According to Lynette Sweet, former BART Board Member and Board President at the time of the film production, “The movie was pitched to BART, and BART said, ‘No.’”

“What ended up happening was Gavin Newsom (Mayor of San Francisco at the time) called me, and he said, ‘What’s going on at BART? Why won’t they make this movie,” Sweet said. “I said, ‘Stop, Gavin. I’ll call you back tomorrow. There was no way we were passing on Will Smith.”

Sweet said convincing BART to get on board “was a matter of getting to the right people.”

“It took a lot of involvement from BART,” she said. “So, my pitch was: We gotta do this. It’s Will Smith! And the mayor has asked us how to get it done.”

BART’s involvement felt especially essential, Sweet said, because the transit system once provided Gardner and his young son with safe refuge. Gardner, whose book “The Pursuit of Happyness” provides the basis for the film, slept with his child—on multiple occasions—in the bathroom at MacArthur Station. BART trains took him to job interviews.

Sweet remembers most vividly a “birthday gift” she got from Will Smith.

“I got a peck on the cheek from Will Smith!” she said, before reflecting on the film’s impact more generally on the organization. “That movie really united us,” she said. “It was a positive moment for the agency after tough contract negotiations in 2005. And it reminded us what we were about: serving the Bay Area.”

“I did like the movie,” Gonzalez said. “Being a part of it was a lot of fun—for the most part.”