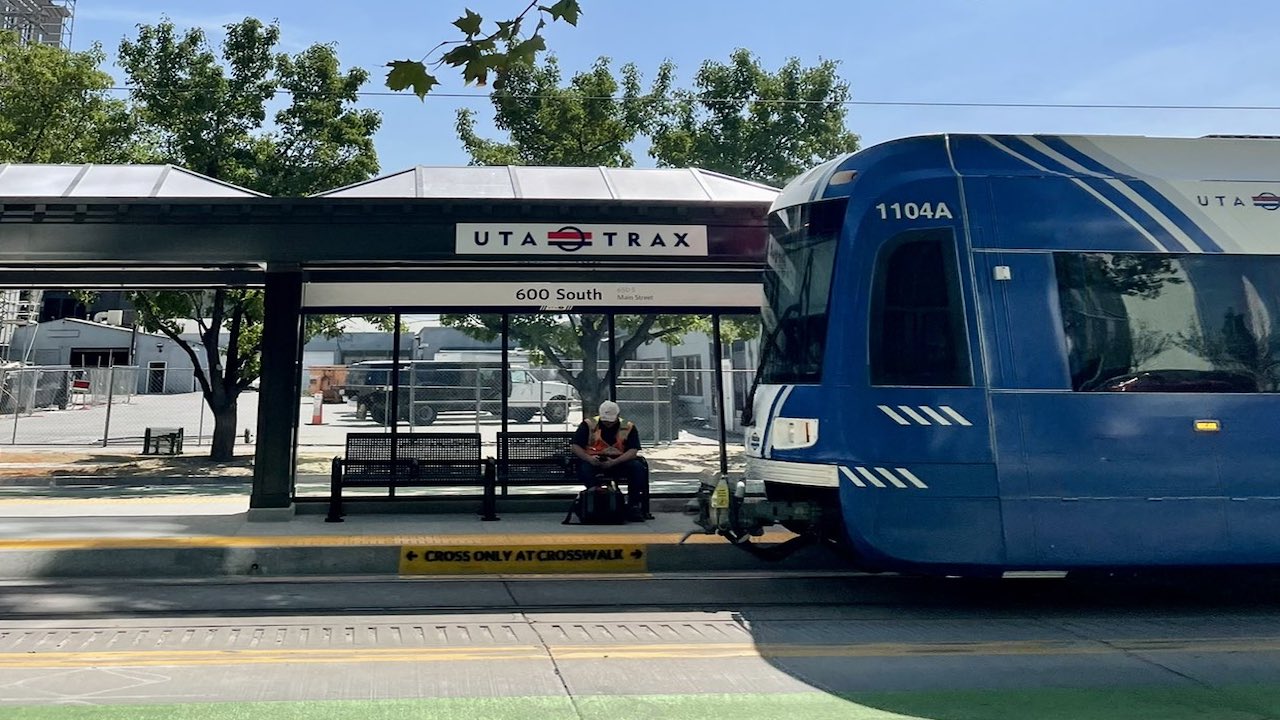 Referring to the new station, Mayor Medenhall said, “it will not only increase access to the City’s expanding urban core, but [is also] a testament to a strong public-private partnership between local government agencies and the private development community.”

The MTA announced on July 26 a public-private partnership to provide cell coverage throughout all 418 track-miles of subway tunnels, along with an expansion of Wi-Fi service to all 191 above-ground subway and 21 Staten Island Railway stations. Transit customers currently have access to cellular and Wi-Fi service at all 281 underground subway stations through Transit Wireless, a BAI Communications Company. A proposed expansion, MTA says, would “transform the subway system into a fully digitally-connected transit network that gives riders the ability to use their mobile devices throughout the entire subway system.”

“Bringing cell connectivity to the tunnels between stations and Wi-Fi to above-ground stations is a major step forward in enhancing transit riders’ experience,” said MTA Chair and CEO Janno Lieber. “And the deal MTA has landed will also help the MTA’s bottom line–a major concern as the pandemic winds down.”

All underground stations currently have cell service and Wi-Fi. The proposed agreement, MTA says, would expand this to provide connectivity in the tunnels between stations and in above-ground stations. Further, it will enable Transit Wireless to improve the existing MTA communication system and generate revenue by marketing unused fiber to private customers. Transit Wireless would design, build and operate a neutral-host network that provides every subway tunnel in the system with a wireless communication connection.

In recent years, the MTA says it has made “significant strides” improving connectivity, which included partnering with Transit Wireless to bring cell service and Wi-Fi to all underground subway stations in 2017, and in 2020, bringing cellular coverage and data connectivity to the L Train tunnel. According to MTA, the connection between Brooklyn and Manhattan on the L line became the first tunnel in the New York City subway system to have full connectivity, for AT&T, Verizon and T-Mobile customers.

Overall, MTA says the project is expected to result in more than $1 billion in benefit for the Authority and its customers over the life of the agreement in terms of service provided, additional revenue and cost savings. Work on the project will begin immediately and be completed in 10 years. Riders will be able to use the new services as each section is completed.

With resources from Keep Oregon Moving, the state’s first-ever stable source of funding for public transportation, TriMet will continue to “find new ways to support low-income riders” by offering a free one-month pass to new and returning customers of its income-based reduced fare program for the first month of enrollment.

“This year, because of COVID-19’s impact on ridership, we have access to an unexpected financial resource: unspent funds from the state of Oregon,” TriMet said. “These funds, which were distributed to TriMet under Keep Oregon Moving, must be used to help riders with low incomes access transit.”

For the next two years, TriMet will give every new and re-enrolling participant in its reduced fare program based on income a free, one-month pass for unlimited rides. “This will offer continued support to the many riders and essential workers who have relied on our system throughout two-and-a-half years of the pandemic’s unprecedented impact, while ensuring the funds serve the members of our community for whom they are intended.”

TriMet’s reduced fare based on income is available to Oregon residents, ages 18 through 64, who qualify for its Honored Citizen Fare, which is solely based on annual income. The discounted rate is available to people who participate in programs, such as Oregon Health Plan (OHP) and Supplemental Nutrition Assistance Program (SNAP), or who earn up to 200% of the federal poverty rate. That’s currently about $27,180 per year for an individual and $55,500 for a household of four. Participation grants unlimited rides on TriMet’s fixed-route buses and trains for 50% off the cost of a two-and-a-half-hour or full-day ride. It caps monthly costs for riding at $28 per month, a $72 discount off the cost of Adult fare, according to TriMet.

Since TriMet began offering income-based reduced fare in 2018, the agency says, more than 42,000 Oregonians have signed up to ride for less. Participants are required to re-submit documents verifying qualification in the program every two years.

According to the agency, the Keep Oregon Moving Act, which helped establish TriMet’s low-income fare program, less funds set aside for the program were used because fewer people were riding during the COVID-19 pandemic, so TriMet is “taking advantage of the available funding to provide additional support for people struggling financially.”

Throughout the next two years, TriMet says it will pilot expanded programs with the funding, which will be managed within the agency’s current Access Transit Fare Program. The new programs will provide additional resources for individuals who are low income and part of a vulnerable rider group, such as seniors, veterans, college students and people experiencing disabilities.

The free month pass for current and re-enrolling participants in TriMet’s reduced fare program based on income, is the second program to roll out this year, the agency said. In May, TriMet announced that a portion of the redirected funding would go toward expanding access to transit during summer months for high school-aged students at the 18 school districts within its tri-county district, which also participate in the agency’s Access Transit High School Program.

Although these programs are short-term in nature and meant to serve as pilots to help inform future approaches and efforts, TriMet says, staff will be working with members of the Committee for Accessible Transportation (CAT), the Transit Equity Advisory Committee (TEAC) and others to “explore new and different funding strategies that could be used to sustain and grow these efforts in the future.”

Metrolink has announced that another round of work on the Kitchener Line has kicked off, which will help bring two-way, all-day service from Toronto’s Union Station to Kitchener GO Station. The latest round of improvements includes upgrades to Bloor GO Station and the West Toronto Railpath, which will “improve customer experience and increase access and connections in the community.”

The project, Metrolinx says, is made up of many different pieces of work that, once complete, will “fit together seamlessly to deliver increased service and connections from Union Station to Kitchener GO Station.”

Metrolinx has been making improvements to bridges, tracks and stations along the Kitchener Line in preparation for the larger GO Expansion project–the largest transit expansion in Canadian history, according to the transit agency.

In 2018, Metrolinx completed the installation of a fourth track from Nickle Street to Black Creek Drive. Now, the transit agency is making more upgrades in Toronto between Black Creek Drive and Lansdowne Avenue that will further support the future GO Expansion program.

According to Metrolinx, this next round of work on the Kitchener Line, which is starting July 2022 and is expected to be completed by 2025, includes:

The Telework Emissions Reduction Calculator tool, a product of Valley Metro-sponsored ridesharing solutions service ShareTheRide.com, received a Top Product award from the 2022 Environmental+Energy Leader Awards. This tool, created by the Arizona Department of Environmental Quality (ADEQ), helps companies calculate how much they can save, financially and environmentally, by shifting to telework.

“We believe that it is important to inform companies on the widespread benefits of telework with the Emissions Reduction Calculator,” said Abigail Cooksey-Williams, Valley Metro’s Transportation Demand Management (TDM) Manager. “This award emphasizes the importance of understanding how every effort to reduce trips supports important air quality efforts.”

To use the tool, employers enter information about the potential number of employees and the average distance traveled from the worksite. Then, the calculator provides an estimate for the number of emissions prevented and costs saved to employees if telework was implemented.

“The Telework Emissions Calculator Tool educates the public and demonstrates the benefits of organizational teleworking to improve regional air quality for all Arizonans,” said ADEQ Air Quality Division Director Daniel Czecholinski. “One of the outstanding features of the Telework Emissions Calculator is that it gives employers information on how telework can reduce regionally specific pollutants, by allowing managers to estimate emissions savings for CO2, VOCs, NOx and PM2.5 annually.”

SharetheRide.com, developed by RideAmigos, provides commute-matching services and ridesharing solutions to reduce single-occupancy vehicle trips. The service is offered and funded through a partnership with Valley Metro, ADEQ, Maricopa Association of Governments and Maricopa County Air Quality Department in an effort to improve air quality.

The Environmental+Energy Leader Awards judges entries from various industries on their success in providing significant sustainability and energy management results. The Telework Emissions Reduction Calculator, Valley Metro says, was chosen based on its “contribution to environmental efforts, innovation, efficiency and other criteria that set this tool apart.”