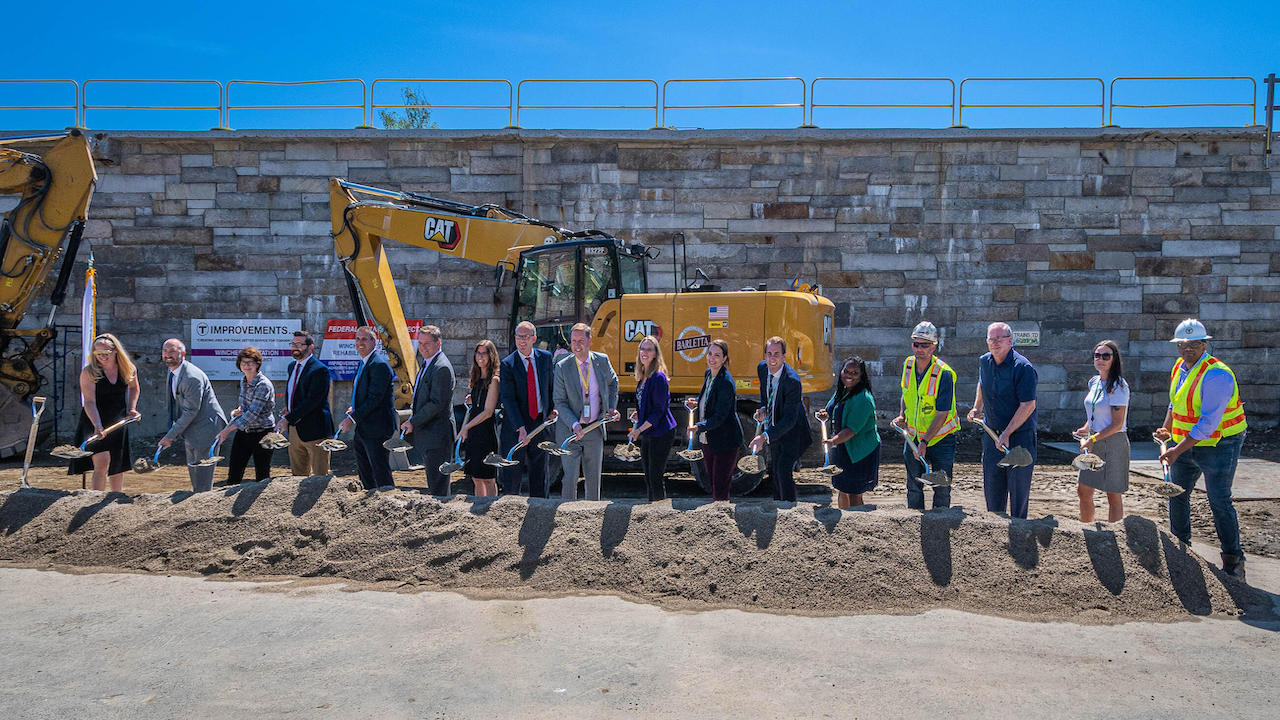 MassDOT, the MBTA, local elected leaders, community partners and others joined together to celebrate a groundbreaking for upcoming improvements at Winchester Center Station.

Massachusetts Transportation Secretary and CEO Jamey Tesler and MBTA General Manager Steve Poftak joined on June 30 state and local elected leaders, as well as community partners to celebrate a groundbreaking at Winchester Center Station on the Lowell Commuter Rail Line. The station, which had not had any major updates since the 1950s and did not meet current accessibility standards, was closed for repairs in January 2021.

The upgraded Winchester Center Station will be completely renovated to include structural safety repairs and improvements to safety, accessibility and station capacity. With a construction cost of approximately $50 million, the improved Winchester Center Station will feature new high-level and accessible platforms to allow for easy boarding and to accommodate longer, nine-car trains that increase station capacity. Additional updates include reconstructing access ramps and adding new elevators for better accessibility; upgrading canopies, signs, railings and lighting for safety and security; adding benches, bike racks, a public address system, and other amenities for comfort and convenience; and updating walkways, sidewalks and parking lot areas. The updated and improved Winchester Center station is anticipated to open to Lowell Line riders in spring 2024.

“Winchester Center Station is an example of the MBTA collaborating with the communities it serves to make important safety upgrades while also improving the customer experience. These efforts continue to deliver on the Baker-Polito Administration’s commitment to providing reliable, accessible service for all riders,” said Transportation Secretary and CEO Jamey Tesler. “I thank the MBTA for its work on this project and for continuing to prioritize infrastructure investments like this renovated station, and we thank those who continue to support critical capital investments as we modernize the T.”

Transport 2050, which has been approved by the Mayors’ Council and TransLink’s Board of Directors as the region’s new decade-long list of transportation priorities for Metro Vancouver prioritizes the first 10 years of actions originally outlined in Transport 2050. The plan received “overwhelming public support” in April with 85% of respondents providing positive feedback about the proposal’s transit improvements during the public engagement period, according to TransLink.

According to Transport 250, TransLink will implement an “unprecedented increase in local bus service and continue expanding the SkyTrain network, while also introducing Bus Rapid Transit (BRT) technology to the region,” which will bring specialized zero-emission buses to fully traffic-separated corridors with dedicated stations for passengers to board.

Major priorities of the plan include:

Transport 2050 is estimated to cost $21 billion throughout 10 years and will need “significant new revenue sources and investments from all levels of government to deliver.” The plan will be delivered in phases and funded through a series of future investment plans.

Corridors planned to receive BRT include:

The next step, TransLink says, will be to develop a detailed municipal partnership framework to engage local communities on future BRT planning decisions.

“This plan outlines the biggest transportation improvements in Metro Vancouver’s history,” said Jonathan Cote, Chair, Mayors’ Council on Regional Transportation. “It will require a new approach to how we fund, build and operate our regional transportation system, requiring all governments – local, regional, provincial and federal – to work together in innovative ways to achieve this vision. Through collaboration, this much-needed plan will increase access to green transportation options that reduce costs and GHG emissions, help address our region’s housing affordability crisis and better connect our communities.”

“We are at a critical time to invest in our future,” said TransLink CEO Kevin Quinn. “We have heard through the most robust community engagement in TransLink’s history that we need to act with both ambition and urgency. Transport 2050: 10-Year Priorities will bring historic actions to combat climate change, reduce congestion, and improve livability in this region.”