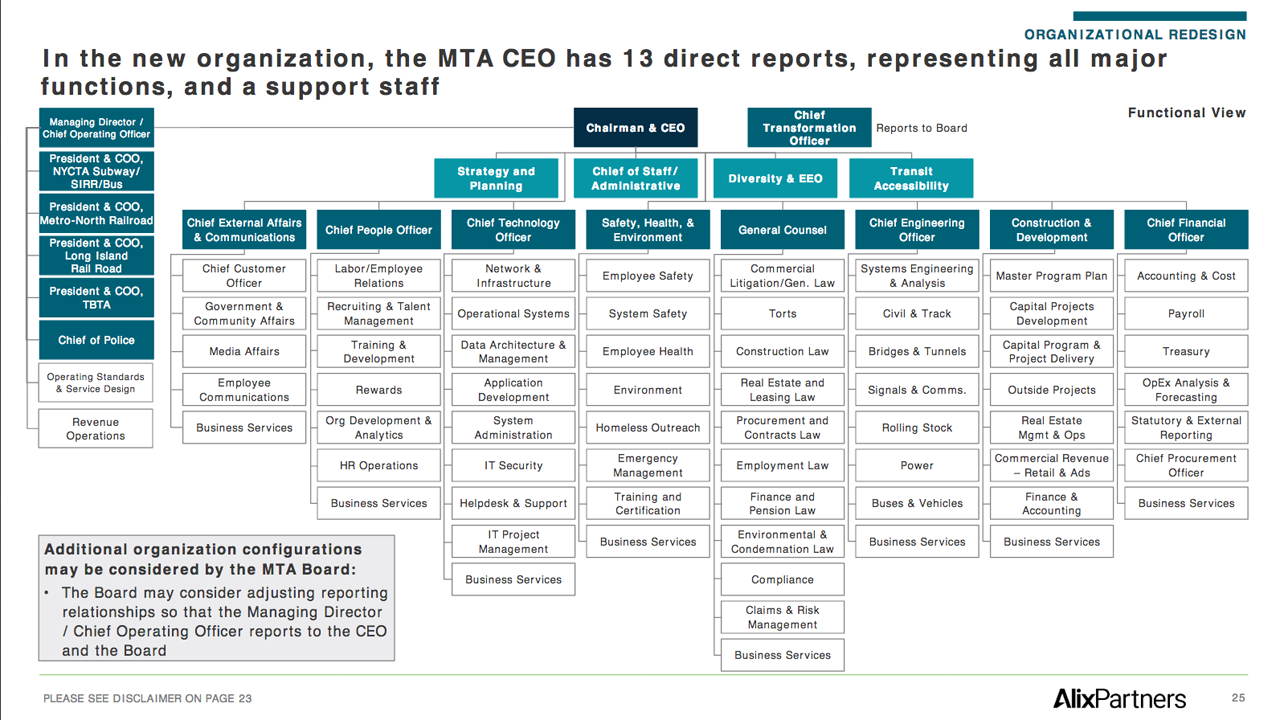 The nation’s largest public transportation agency, the New York Metropolitan Transportation Authority (MTA), on Oct. 25 issued an RFP (Request for Proposals) for one or more consultants to assist it with its Transformation Plan, described as “the first reorganization in more than half a century … that will position the agency to dramatically improve service, end project delays and cost overruns, and finally deliver the modern, reliable and efficient transportation system customers deserve.”

The 70,000-employee MTA—often criticized as a bureaucratic behemoth suffering from too many layers of management and political meddling (notably and recently, New York Gov. Andrew Cuomo), and overloaded with highly paid consultants—is inviting vendors “with specific expertise in four major categories—reorganization and consolidation of Administration and Back Office Support functions, Police and Safety, Construction and Development, and External Communications—to submit bids.”

The agency developed the Transformation Plan in consultation with global management consultant AlixPartners, which was paid $4 million for the 37-page report. Up to 2,700 jobs, characterized as “mostly non-union administrative,” are expected to be eliminated. AlixPartners has estimated that the plan, called “controversial” in some circles, could save the MTA up to $500 million annually, and take up to two years to fully implement.

The Transformation Plan, MTA says, “is focused on updating, standardizing and simplifying the MTA’s administrative and back office processes, to reduce redundancies and drive clearer lines of accountability. These reforms will allow the organization to exclusively turn its attention to operational excellence, and focus on core issues such as safety, day-to-day operations and maintenance. In capital projects delivery, the agency is also working to address slow, costly and bureaucratic processes related to significant construction projects by centralizing all capital project planning, development and delivery to one unified group. And the MTA will also create a new central customer communication function to create clear, high-quality and consistent customer engagement.

The vendor or vendors selected from the RFP will directly support implementation under the Chief Transformation Officer. “To be successful in this effort, the RFP requests proposers have specific skills related to the aforementioned four major categories, as well as expertise in project management consulting, deep business process reengineering experience, IT capabilities with PeopleSoft and data governance, and be proficient in working with transportation agencies and organizations with union employees.”

According to a report published July 24, 2019 by Crain’s New York Business, “Gov. Andrew Cuomo, who controls the MTA, essentially commissioned the plan in the state budget, which imposed new real estate taxes and a congestion fee in Manhattan to fund subway upgrades. With the budget’s adoption nearly four months ago, the MTA became required by law to adopt a reorganization plan by July 31. But a number of transit and riders group had called for the MTA to vote down this particular plan.

‘A coalition of organizations that included the TransitCenter, Riders Alliance and Tri-State Transportation Campaign released a statement opposing it. They argued the reorganization could actually slow down improvements and reduce accountability.

“The plan has been attacked by other MTA critics as well, including the Manhattan Institute’s Nicole Gelinas, who called it ‘standard-fare corporate reorganization’ that could have been put together by ‘an eighth-grade business class.’ She later noted that the $500 million it aims to save is well short of what the agency needs as it contemplates $40 billion in capital work just to its subways and buses. Gelinas sketched out how the MTA could save $10 billion.

“The plan received only one dissenting vote and one abstention, from Veronica Vanterpool and David Jones, respectively. Both are appointees of New York City Mayor Bill de Blasio.”

DeBlasio and Cuomo—both Democrats—famously don’t get along and have frequently feuded in the media over the MTA’s budget and capital projects, and how much the city’s financial contribution should be, particularly with regard to the NYC Transit subway system. Interestingly, they appear to have have agreed on the need for MTA restructuring.

Proposers will be able to submit bids on one or more of the RFP categories, and Minority and Women-Owned Business Enterprises (MWBEs) are encouraged to apply. To view the full MTA transformation recommendations, click HERE.