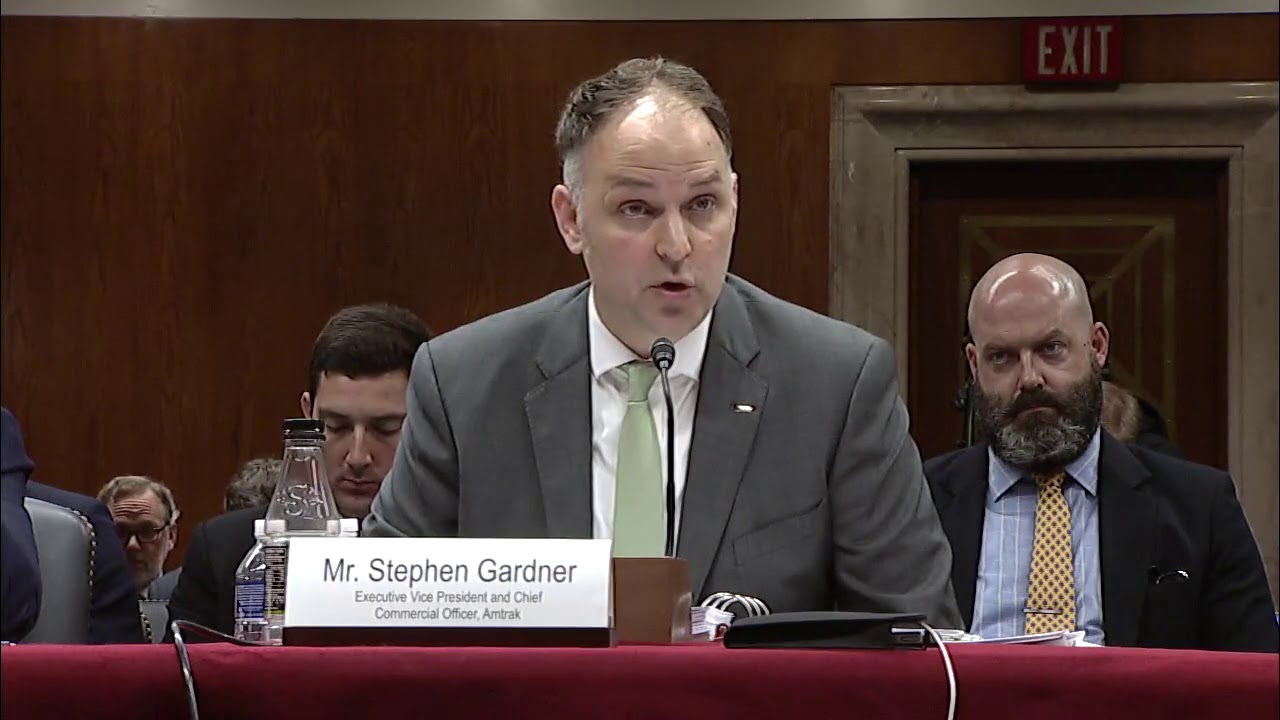 WATCHING WASHINGTON, RAILWAY AGE FEBRUARY 2020 ISSUE: Spending others’ money as if it were one’s own isn’t successful politics. Yet notwithstanding Congress’ current appetite for trillion-dollar annual deficits, there are limits to federal spending—especially on Amtrak, which labors perennially for but a miniscule portion.

Presidents Reagan and both Bushes recommended zeroing-out Amtrak funding, Presidents Clinton and Trump sought 23% cuts, and Amtrak opponents in Congress are too numerous to list.

Amtrak Senior Executive Vice President Stephen Gardner is no novice to such reality, having been a senior legislative aide (2001-2009) to Senate Commerce Committee Democrats and Sen. Tom Carper (D-Del.), an Amtrak Board member from 1994-1998 (not to be confused with current Board member Thomas C. Carper of Illinois).

In his past Senate post, Gardner understood that to extract from Congress financial supplements to Amtrak’s fare box revenue requires demonstrating a relevance to constituent wants. His business acumen, honed since arriving at Amtrak in 2009, clarifies that if one cannot measure, one cannot manage.

His measurements are convincing that tomorrow’s Amtrak cannot be the image of its past if it is to continue coaxing from Congress and states scarce public dollars.

Of America’s 330 million population, some 66% (Generation X, Millennials and Generation Z) either were unborn or have no recollection of train travel before airline deregulation and an Interstate Highway System forever changed American mobility and bled away most rail passenger traffic. Some 85% of Amtrak riders are from the 100 largest cities; just 15% choose long-distance trains; and, of those, but 3% ride end-to-end. The “vast majority” of Amtrak riders, says Gardner, book trips shorter than 250 miles.

While Amtrak decision makers may tolerate tiny doses of nostalgic recollections of dinner in the diner with Dinah, and “Sleeping Like a Kitten” (aboard Chessie), their Alka Seltzer-free forward focus is to deliver, as demanded by modern generations, convenient arrival and departure times between business centers, on-board virtual workstations, and last-mile connectivity to other public transit. “This is not the America of 1971, when Amtrak began operations,” Gardner says.

“The sweet spot for passenger rail is the 350-mile corridor, connecting major metropolitan areas and communities around them, over which we can produce multiple trips per day at convenient arrival and departure times,” he says. While market research confirms a place for long-distance service, what is missing, Gardner says, is connectivity within those routes, such as corridor trains that eliminate 3 a.m. arrivals.

“Across the country, we could operate corridors within the long-distance routes that look a lot like our state-supported trains in California and the Northeast,” Gardner says. “An example is multiple-trip, convenient-time corridor service linking Chicago, Cleveland and Buffalo, building on the foundation of current long-distance service as we have in California, Downstate Illinois and the Pacific Northwest.

“We are striving for the same between St. Paul and Chicago; more trains feeding current routes; and corridors such as Cleveland, Columbus and Cincinnati, or Nashville and Atlanta,” he says. “Plus, new routes are in development, including Chicago with the Illinois-Iowa Quad Cities and Rockford, Duluth and Minneapolis; and, long term, in North Carolina.”

Of course, there are nagging on-time performance (OTP) issues over host freight railroads, such as between Atlanta and Charlotte, Gardner says. But with freight traffic down and implementation of Precision Scheduled Railroading, which theoretically produces better freight train schedule certainty, he spots opportunity for OTP improvement.

“There still are states and population markets we don’t serve,” Gardner says. “We believe there is plenty of capacity across the host freight rail network; and where additional capacity is needed, Amtrak is ready to be an investor” (assuming, of course, congressional and state financial support, and willingness of freight railroads to host additional Amtrak trains). “What Congress needs to do is to give us the right to ensure the law (as to preference and priority handling) is being met.

“If we provide trip-competitive times with driving, time-of-day options and reliable service as the population grows and airport and highway congestion increase, then the best decades for Amtrak are ahead,” Gardner says.