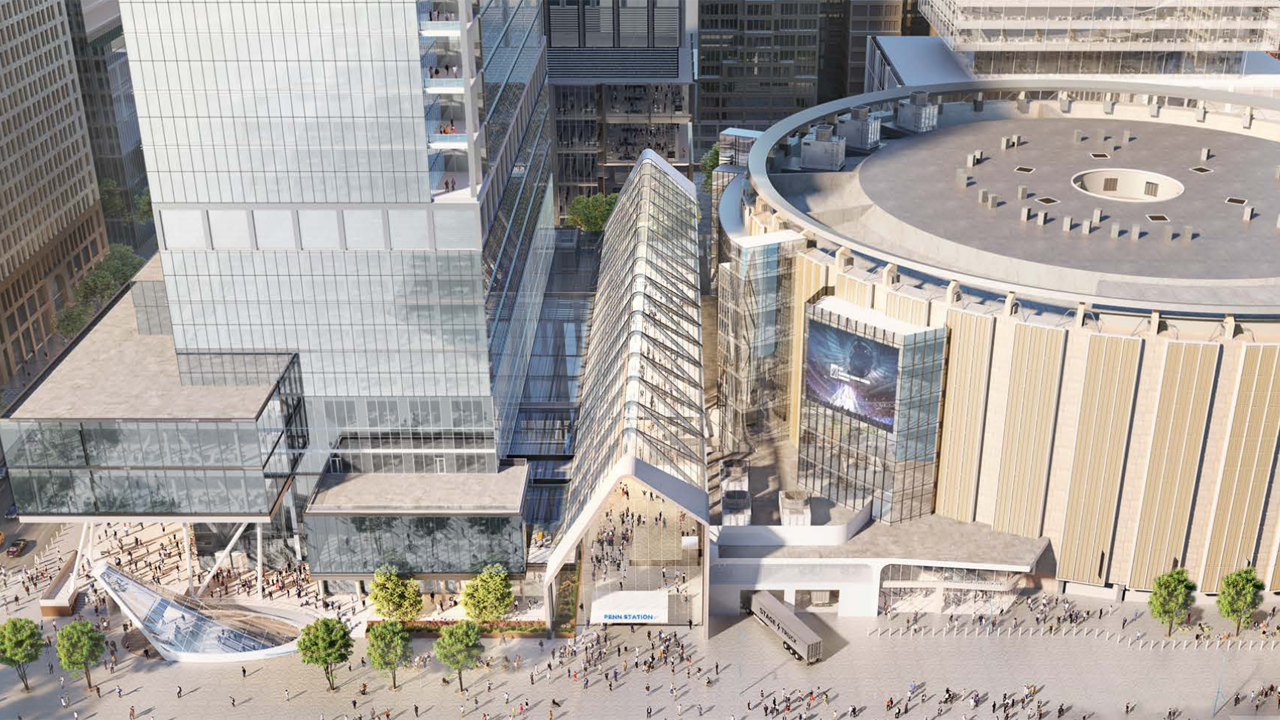 Outside rendering of the proposed reconstruction of the existing Penn Station in New York City, courtesy of the office of New York Governor Kathy Hochul.

The state and city of New York have agreed on a plan to help cover reconstruction costs and future expansion of Penn Station as well as revitalization of the surrounding area.

New York Gov. Kathy Hochul on Nov. 3, 2021 unveiled the Penn Station project that is slated to prioritize and expedite reconstruction of the existing station, 60% of whose users are MTA New York City Transit subway and Long Island Rail Road riders.

In June, the project entered the design phase, and New York Metropolitan Transportation Authority (MTA), Amtrak and New Jersey Transit launched a request for proposals from architecture and engineering firms; submissions are due later this month and awards are slated to be announced in the fall. While no date has been set to start the project, it is estimated to take 5-6 years to complete and come with a price tag of $6 billion-$7 billion.

The funding framework now agreed to by the state and city of New York will ensure “that the city maintains a current and consistent level of property tax revenue while requiring that funding for the station, vibrant open space, and public realm improvements, comes in part from private development,” according to a July 18 announcement by Gov. Hochul and New York City Mayor Eric Adams. It is also said to affirm “the state’s ongoing commitment to rebuilding Penn Station without raising taxes on New Yorkers or fares for transit riders.”

As part of the agreement, the city and state also committed to establishing a “city-state governance entity” to oversee public realm improvements and to ensure coordinated planning and implementation.

According to the Governor’s Office, funds from privately financed development will help pay for a reconstructed Penn Station; the potential future expansion of Penn Station; and improvements to the surrounding area that the city-state governance entity will oversee, such as street and sidewalk improvements, creation of new public spaces in the area around the station, and construction of “more seamless transit connections between Penn and nearby subway stations.”

The Office reported that the state “will sell development rights to private developers and collect payments-in-lieu-of-taxes (or PILOTs) on newly constructed, modern, and environmentally friendly office and residential buildings. The amount of PILOT payments collected in excess of existing property taxes, in addition to revenues from the sale of additional development rights, will help to fund the project.”

The state and city will allow PILOTs to pay for up to:
• 100% of improvements to streets, sidewalks, public spaces and other elements of the public realm.
• 50% of improvements to transit infrastructure including underground concourses and subway entrances in the neighborhood.
• 12.5% of the cost of the reconstruction and potential expansion of Penn Station.

The remaining costs, the Office said, would be funded through the federal government, New Jersey, New York state, Amtrak and other public funding sources.

“To ensure that the city maintains its tax revenue stream, the city will continue to collect amounts equal to current taxes on each development site with a 3% increase each year,” the Governor’s Office said. “All buildings will return to the city’s tax rolls after the agreed contributions to project costs are met, or after a period of 80 years (at the latest). Because of the anticipated increase in property values, the city is expected to collect significantly more in tax revenue once the buildings are put back on the city’s tax rolls. The city and state have also agreed to cap any property tax abatements.”

“This agreement brings us one step closer to a beautiful, modern station worthy of New York with vibrant open space; lively streetscapes; and better, more seamless connections to local transit,” Gov. Hochul said. “Thanks to our partnership with Mayor Adams and other local and community leaders, we are standing by our commitment to revitalize Penn and the surrounding area while getting the best possible deal for New Yorkers.”