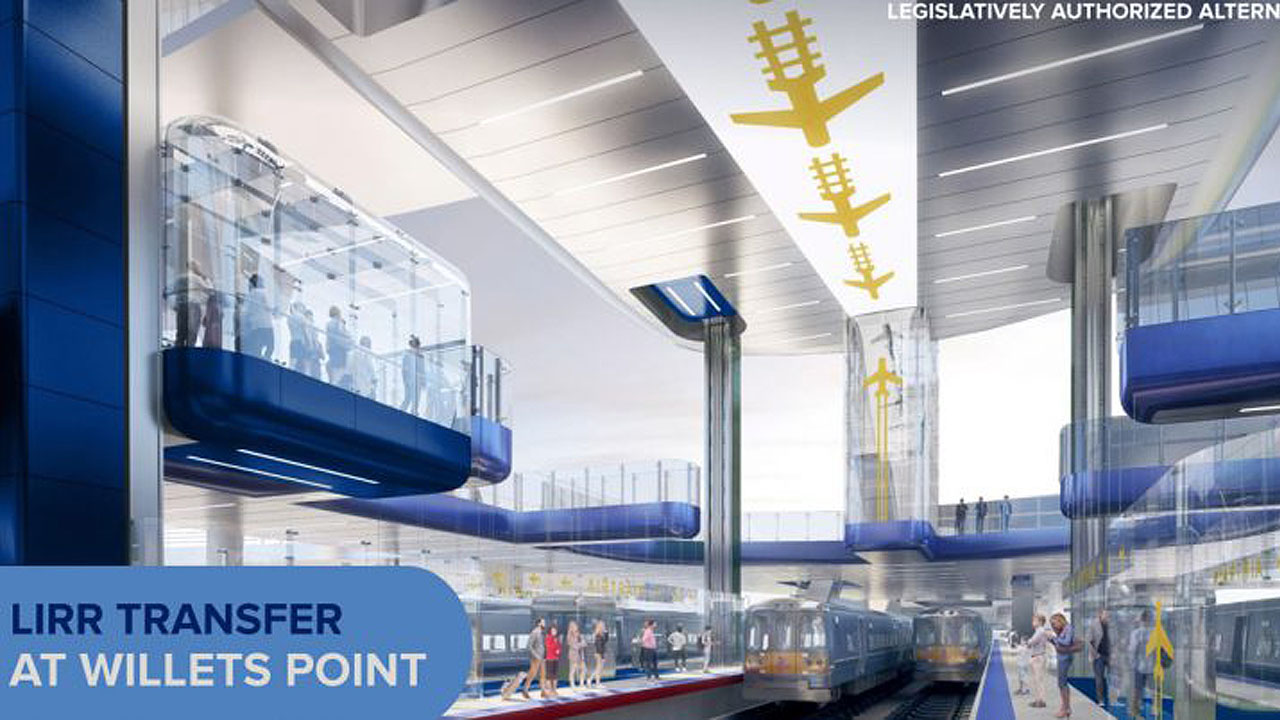 A rendering of the transfer point between the proposed AirTrain LGA and Long Island Rail Road at Willets Point. Credit: State of New York

New York is moving ahead with long-sought plans to get people from the train to the plane.

State officials said the new law will allow multiple potential alignments to be considered during an upcoming environmental review. The proposed AirTrain LGA project will connect Midtown Manhattan to the airport in less than 30 minutes.

The legislation specifically defines a corridor within which the AirTrain LGA project could be constructed and allows, within this corridor, for alternative alignments to be developed and considered as part of an extensive environmental review process, with required public participation.

The governor’s office says the legislative action marks another critical step toward making a mass-transit link between Midtown Manhattan and LaGuardia a reality, which will help reduce vehicular congestion and delays for passengers traveling to and from the airport.

AirTrain LGA seeks to establish a reliable, convenient means of travel between the airport and New York Penn Station or Grand Central Terminal. It will also provide rail access from all of Long Island via the Long Island Rail Road, as well as the Metropolitan Transportation Authority’s 7 subway line.

“AirTrain LGA will set an example of comprehensive transit infrastructure for the rest of the nation, and will pay dividends for decades by connecting riders to transit hubs across the metropolitan area, boosting passenger growth across all airlines, and providing a more efficient means of travel for generations to come,” said Gov. Cuomo.

The governor said this latest action builds on the significant momentum of the past 18 months toward building AirTrain LGA. Parsons Brinckerhoff (now known as WSP) was selected to lead the preliminary engineering and design process for up to two new AirTrain stations at LaGuardia Airport’s new unified terminals, as well as construction of an AirTrain station at Mets-Willets Point and construction of the system’s elevated guideway.

The environmental review of the project is slated to begin later this year and be completed by the end of 2019. Construction is anticipated to start in 2020 and conclude in 2022.