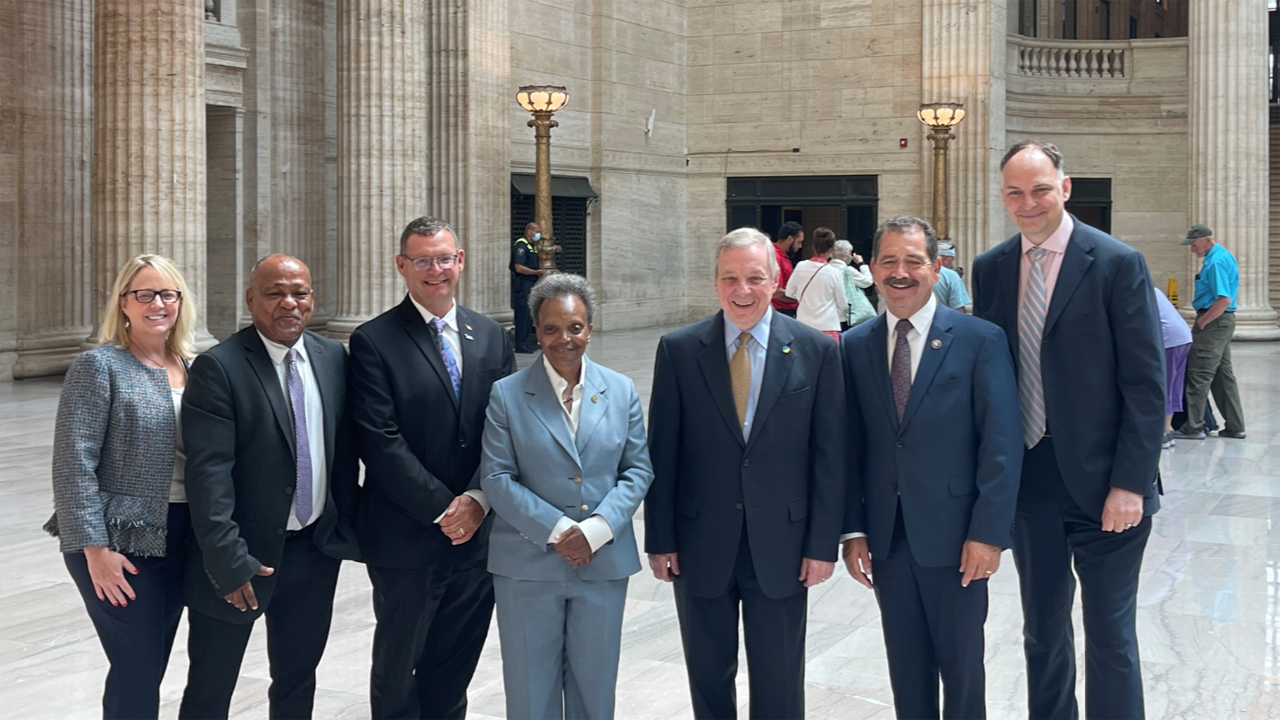 “It was a pleasure joining @RepChuyGarcia, @chicagosmayor, and local transportation leaders to announce a coalition of support for the Chicago Union Station Access Project. The $418M project will enhance the passenger experience and improve rail service throughout our region,” U.S. Senate Majority Whip Dick Durbin (D-Ill.) tweeted on July 7. (Photograph Courtesy of Sen. Durbin via Twitter)

A broad coalition of federal, state and local leaders has formed in support of the $418 million Chicago Union Station Access Project, which is now up for $251 million in MEGA grant funding from the U.S. Department of Transportation.

The coalition reported that the Chicago Union Station Access project would:
• Create a new way for passenger trains to access the station from the south, which is slated to improve on-time performance for both Amtrak and Metra trains.

• Provide the increased capacity needed for the new routes and increased frequencies that Amtrak has planned for the Midwest.
• Provide faster connectivity between the region’s largest job hubs.
• Improve on-time performance by more than 15 minutes on the Chicago to Carbondale route.
• Transition Amtrak’s southbound passenger service off CN tracks between Chicago and Joliet, Ill., which will further improve on-time performance.

“We’ve been working on these ideas and bringing the partners together for years,” said Stephen Gardner, who leads Amtrak, a project partner with IDOT, city of Chicago, Metra, Cook County, and Michigan’s Department of Transportation. “We can’t be sure we will get all the funding we’re seeking, but our goals line-up exactly with the USDOT’s Mega project goals.”

“We appreciate Sen. Durbin’s continued advocacy and commitment to bringing our region together to improve passenger railroad service throughout the Midwest,” said Metra’s Jim Derwinski. “The improvements discussed today [July 7] to Chicago Union Station would benefit Metra and Amtrak riders alike by providing a modern passenger experience at the station and would help pave the way for an expansion of Metra’s service and the opportunity to consider through-running between our north and south corridors. I look forward to working with Sen. Durbin, the city of Chicago, Amtrak and our regional partners to advocate for these critical federal funds to improve service.”

“The Michigan DOT supports Amtrak and our partners in applying for the federal MEGA grant application,” said Michigan State Transportation Director Paul C. Ajegba. “Improvements to Chicago Union Station and the final design of double tracking on the Amtrak-owned line from Niles through and beyond Dowagiac, Mich., will be a huge benefit for rail travelers.”

“President Biden’s infrastructure bill was drawn up with projects like this in mind,” said Chicago Federation of Labor President Bob Reiter. “The renovation of Union Station will revitalize Chicago and solidify our city as the transportation hub in the country. Modernizing this grand, historic building will not only bring thousands of good, union jobs during construction, but lead to new opportunities for workers and communities from all across our city and state.”