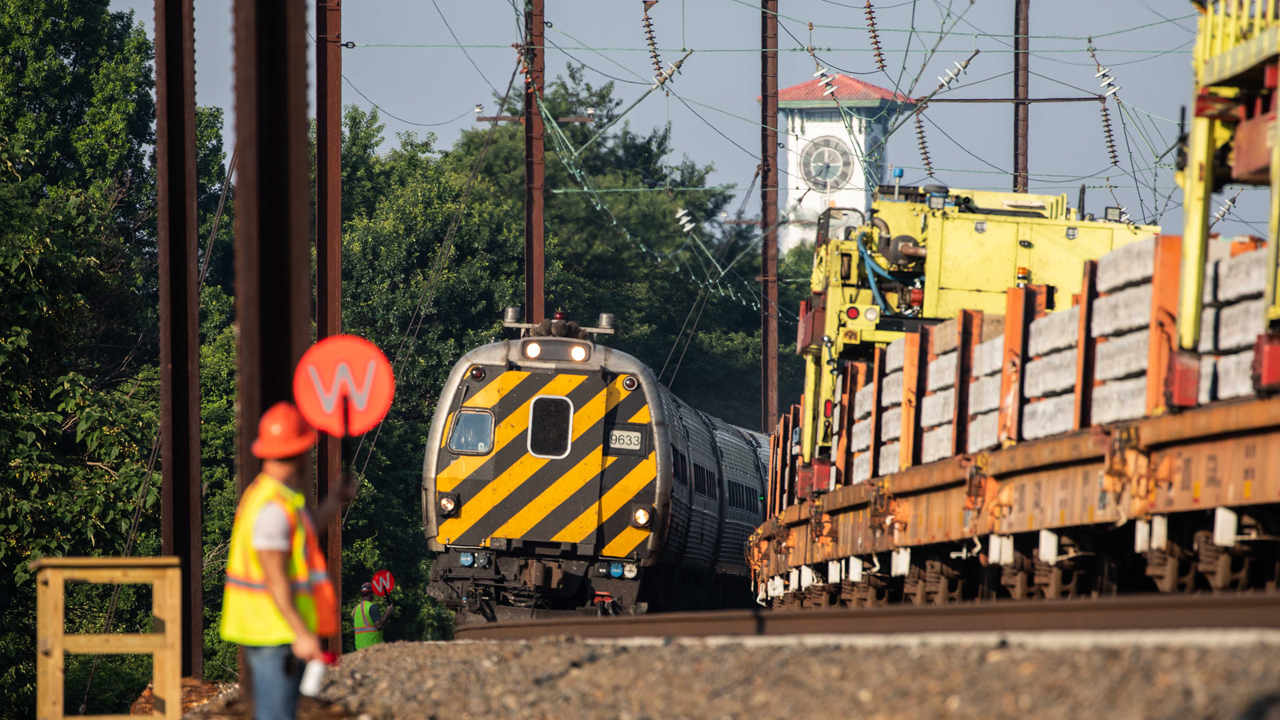 Amtrak Keystone train passing at speed on the NEC.

Watching Washington, August 2018: Human life is measured in scores of years, stars in billions of miles, the national debt in trillions of dollars—all remarkably miniscule numbers compared to the petabytes of data (numbers containing 15 zeroes) generated by artificial intelligence in our increasingly knowledge-based society.

Harvesting, arranging, interpreting and putting to productive use the insights of “Big Data”—predictive analytics—is the work of sophisticated computer technology and advanced employee skills grounded in academic disciplines of science, technology, engineering and mathematics.

Examples are cameras whose billions of lines of computer code support facial recognition technology, driverless vehicles, and railroads that increasingly rely on predictive analytics to power safer and more efficient operations and maintenance.

The NEC may be the most valuable unbroken longitudinal right-of-way in America. Fully electrified, it stretches some 460 miles between Washington, D.C., and Boston. The NEC passes through four of America’s 10 largest metropolitan areas, has the potential to directly serve eight of the nation’s busiest airports, is within an hour’s distance of almost 60 million people, and hosts some 7,500 commuter and 1,200 Amtrak trains daily that on any weekday collectively carry some 800,000 passengers.

The NEC, with minor exceptions, is under the care, custody and control of Amtrak, whose 900-year federally held sweetheart mortgage excuses it from principal and interest payments. Dollars to dispatch trains as well as to maintain, rehabilitate and improve the track structure and signaling are obtained from user charges paid by eight separate commuter agencies operating over the NEC, from Amtrak’s own fare collections, and from cash subsidies granted Amtrak by state and local governments. It’s not enough.

The Northeast Corridor Commission, an 18-member agency created by Congress in 2008 “to improve coordination of the NEC,” calls the NEC “capacity constrained,” beset with deferred maintenance and obsolescence, and in need of almost $60 billion to restore it to a “state of good repair” and fund overdue expansion and improvements.

With dozens of bridges and tunnels—some dating to the Civil War—and signal systems installed during the Great Depression, NEC train delays caused by infrastructure failures, maintenance issues and speed restrictions are endemic.

Boardman’s vision is to transform the silo management structure—by which each commuter agency and Amtrak operate largely independent of each other—into a unified regional transportation system to include highway and aviation partners.

For sure, it’s a Brobdingnagian challenge, but Boardman says the NEC “already is an Internet of Things—trains, stations, signals, sensors, software—receptive to data-driven innovation and cooperation, transforming currently disjointed regional transportation into a customer-centric, interconnected, more flexible and transparent intermodal people-moving network whose schedules, pricing and real-time performance would be accessible through a smartphone application.”

Budget-challenged Amtrak, says Boardman, lacks the resources to renew and expand the NEC, and is incapable of non-rail development, which “needs to be done by development people.”

Awaiting congressional hearings is the AIRNet-21 concept whereby a private-sector management organization would lease the NEC and self-finance expansion and renewal, earning a profit through commercial development and assessment of statutorily regulated market-based user charges on intercity and commuter operators.

“Public- and private-sector ideas abound,” but the key for the NEC, Boardman says, “is to lay down and maintain a safe, zero-defect, in-the-ground infrastructure, managed by using the opportunities that Big Data provides—and teamed with separate, but coordinated, train operating companies to meet commuter, intercity and express services in the busiest rail corridor in the Western Hemisphere.”