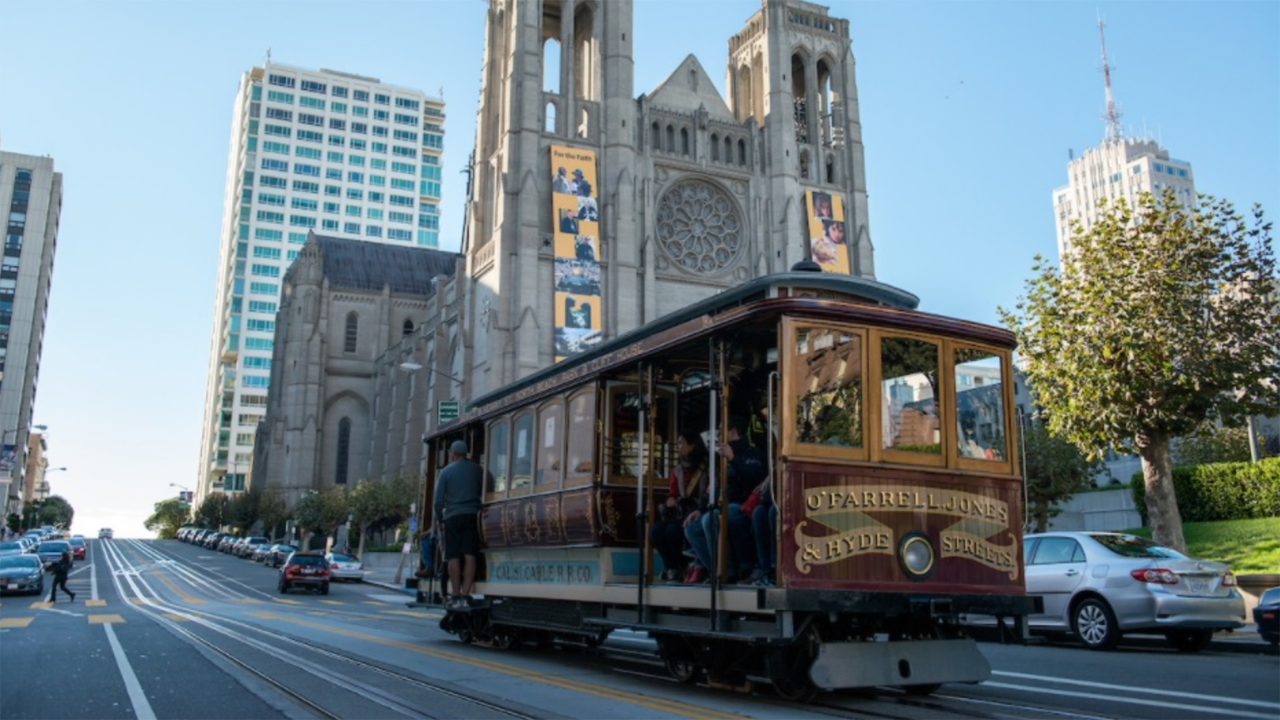 San Francisco's unique and historic cable cars returned to the streets of the City by the Bay on Sept. 4, but an incident at their barn shut them down six days later.

The cable cars original purpose was to provide transportation to San Franciscans and visitors to the city, which they have done for 148 years. Today, they provide a transit experience that is available nowhere else in the world, when they run, but riders will have to wait another week or two before re-boarding.

After a nearly 18-month shutdown due to the COVID-19 virus, the cars made their official comeback on Sept. 4, beginning on the Powell-Hyde line. Service was also restored on the other two lines, but it abruptly came to a halt on Sept. 9. The San Francisco Municipal Transportation Authority (Muni) on Sept. 13 explained why: “Last Thursday at approximately 1:30 p.m., the fire suppression system in the electrical room at the Cable Car Barn at Mason and Washington streets discharged. This caused the electrical room to fill with fire retardant material resembling smoke, which prompted a response from SFFD [San Francisco Fire Department] as a safety precaution. Upon the discharge of the fire suppression system, other automated safety systems were activated resulting in a loss of electrical power to the entire facility, including the propulsion system for the cable cars.”

The suppression system discharge, Muni said, “was due to the failure of an aged release valve which has been in service since the last cable car renovation in the 1980’s. Regular inspections by outside fire safety experts of the fire suppression system have not shown any signs of defect, but the system is almost four decades old and is not considered current best practice. The wider loss of electric power at the facility was the outcome of the systems shutting down safely.” The agency went on to explain that “A 305-pound canister of the fire suppression system’s halon material will need to be assembled over the next week, and then delivered by truck from Ohio, followed by installation and testing.”

All of that will take time, and the agency does not expect service to be back “before the end of next week”; an indication that the cable cars will not run again until the latter days of September.

Still, the latest delay only adds a short time to the shutdown of much of San Francisco’s transit, from which it has not recovered fully. Most city transit was sharply curtailed 18 months ago, when the COVID virus hit. There was no rail transit in the city at all, except for reduced Bay Area Rapid Transit and Caltrain service, and Muni’s bus system shrank from more than 90 lines to a low of 17. The system has been building back, and the return of the iconic cable cars is seen as part of transit’s comeback in the city. According to Muni, the historic cars returned to the Powell-Hyde line for test runs with riders on Aug. 2—the 148th anniversary of the first revenue run ever made.

At one time, a number of different companies operated cable car lines, but they are now part of the city’s transit network operated by Muni. Muni also runs historic streetcars, modern light rail lines and buses throughout the city, contributing to a varied and robust transit mix that includes BART rapid transit trains in the city and the East Bay, and Caltrain regional service along the peninsula to San José and Gilroy.

Before the incident at the car barn, Muni communications staff member Pamela Johnson had expressed the agency’s anticipation of the cars’ return in a Muni blog post: “All aboard? Ding! Ding! A familiar sound is in the air again. It’s time to experience San Francisco once more with a ride on one of the city’s landmark cable cars. When was the last time you were on board? Shop, dine and visit your favorite destinations along the cable car line and support the reopening of San Francisco’s economy.” Johnson also reported: “Rebooting the cable car system required significant work. As the cars had been out of service since March 17, 2020, we had to re-certify and hire new line inspectors and prepare the cable cars’ historic infrastructure to accommodate service.” Now it will take awhile longer before the experience Johnson described will be available again.

Official Muni sources portray the cable car lines as a component of the agency’s transit system. There are three, and the oldest runs with double-ended cars on California Street, on an east-west alignment (see above). The other two run on north-south alignments that include Powell Street as the southern portion of their routes. They split and proceed further north, either on Hyde Street or Mason Street (see below).

Muni spokesperson Kristen Holland told Railway Age that some commuters rode the California Street line before the virus hit and the lines were shut down in 2020 (Muni’s monthly passes are good there). But the cable cars are part of the city’s tourist infrastructure in practice. There are often long lines to get on a car, and seats are scarce, whether inside the cabin or on the open-air portion of the car. Many riders stand and grab a pole, and some stand on the running boards. The cable cars are priced as a tourist attraction, too: a single ride costs $8, and there are no transfer privileges. There is a “senior fare” of $4, but only at the beginning and end of the service day (before 7 a.m. and after 9 p.m.). A day pass costs $24—by far the most-expensive in the nation, but three rides on cable cars cost that much by themselves. A day pass that is not good on the cable cars costs significantly less—as little as $5.

Cable cars are unique vehicles, which run without any internal means of propulsion. Instead of containing an engine, a battery or a motor that collects power from an overhead wire, the cars have a mechanism that holds onto a continuously moving underground cable through a slot in the street. The operator grips the cable to start the car and lets go of it to stop; there is also a brake. The cars work well in hilly places where steep grades rule, and San Francisco fills the bill.

San Francisco was the first place to use cable cars, which were the latest in transportation technology in 1873. Muni staffer Pamela Johnson’s blog post explained their early history: “Andrew S. Hallidie (pictured above), an engineer originally from Scotland, conceived his idea for a steam engine-powered, cable-driven rail system in 1869 after witnessing horses being whipped as they struggled to pull a passenger car up the wet cobblestones of Jackson Street. Hallidie then entered into a partnership to form the Clay Street Hill Railroad, which began constructing a cable line on Clay Street—creating the first cable car line in the world, which launched in May 1873.” At one time, San Francisco had 23 cable car lines. Cable cars soon became popular elsewhere but, by the 1890s, they were superseded by electric streetcars almost everywhere they ran.

Today, cable cars on city streets can be found only in San Francisco, where they began. (Muni offers a short history of the cars on its website.) Some of the cable car lines (but not the one of Market Street) survived the earthquake and fire that devastated the city on April 18, 1906, but politics almost killed the lines four decades later.

In 1947, Mayor Roger Lapham proposed getting rid of them. According to the Muni account: “In response, Friedel Klussmann founded the Citizens’ Committee to Save the Cable Cars. The committee began a public campaign showing that the cable cars’ value to San Francisco was far greater than their operational cost. They succeeded in placing an amendment on the November ballot, Measure 10.” The measure won by a landslide, and the cars still run; albeit on only three lines. Now, the cable cars and their lines are a National Historic Landmark; one of only two transit facilities holding that distinction (the other is the St. Charles Avenue streetcar line in New Orleans, La.).

San Francisco in general and Muni in particular celebrate the cable cars today. The Muni website offers a 148-year service history, replete with photographs. A 2017 Muni blog post describes how the cars and the underground cables are maintained. The place where that occurs is celebrated, too. It is the Washington/Mason Cable Car Barn. In addition to performing its historic task, the facility is also the location of the Cable Car Museum, which contains some original cars from the 1870s, along with historical and technical information about the cars today, including how they work.

Perhaps the most historic cable car document was not set down on paper, but on film. Titled “A Trip Down Market Street,” it was shot with a camera mounted to the front of a cable car. It runs slightly less than twelve minutes, and it documents a trip from Eighth Street to the Ferry Building, by the bay. It was shot in 1906, sometime between late March and April 14. (A digitized version is available for viewing.)

Within a few weeks, or possibly only four days after the film was made, very little of the urban landscape it depicted was left standing. The earthquake and resulting fires on April 18 had destroyed most of it. The Ferry Building survived, but the cable car line on Market Street did not. It was replaced with a streetcar line that was discontinued in 1982, but the surface tracks and overhead wires were maintained, and the line returned to service in 1995. It was discontinued again in March 2020 due to the pandemic, but returned on May 15, 2021 on a limited basis.

The Ferry Building had some difficult years. During the highway craze of the 1950s, the Embarcadero Freeway was built (for an account, see “The Unloved Freeway: A Closer Look” by Arnold Woods), isolating the building behind it. City residents hated the highway, which was weakened by the Loma Prieta earthquake in 1989 and demolished in 1991 (one support member was preserved as a public artifact). Today, the Ferry Building has been restored to its former glory. There are shops and eateries downstairs and offices upstairs, and the ferries are back. The Embarcadero is a true Complete Street, with shops, eateries, entertainment, lots of activity, and historic streetcars running on the once-abandoned tracks.

Transit in San Francisco is slowly coming back. About half the pre-COVID bus lines are back, and rail is slowly returning. According to Kristen Holland, light rail is running on all lines except the “L,” due to construction on Taraval Street. In October, light rail lines in the subway will again run until midnight (10 p.m. on Sundays); an improvement over current service, which ends at 9 p.m..

And the cable cars should be back on the streets soon. Their return to service is another sign that the City by the Bay is coming back to life. That event may be more significant than merely restoring part of the city’s transit. As mentioned earlier, the cable cars function more as a tourist attraction and as an iconic symbol of the city. It appears that city government in general, and Muni in particular, are prepared to bet that tourists are ready to resume their visitations to San Francisco, including waiting in long lines to ride the city’s unique cable cars.