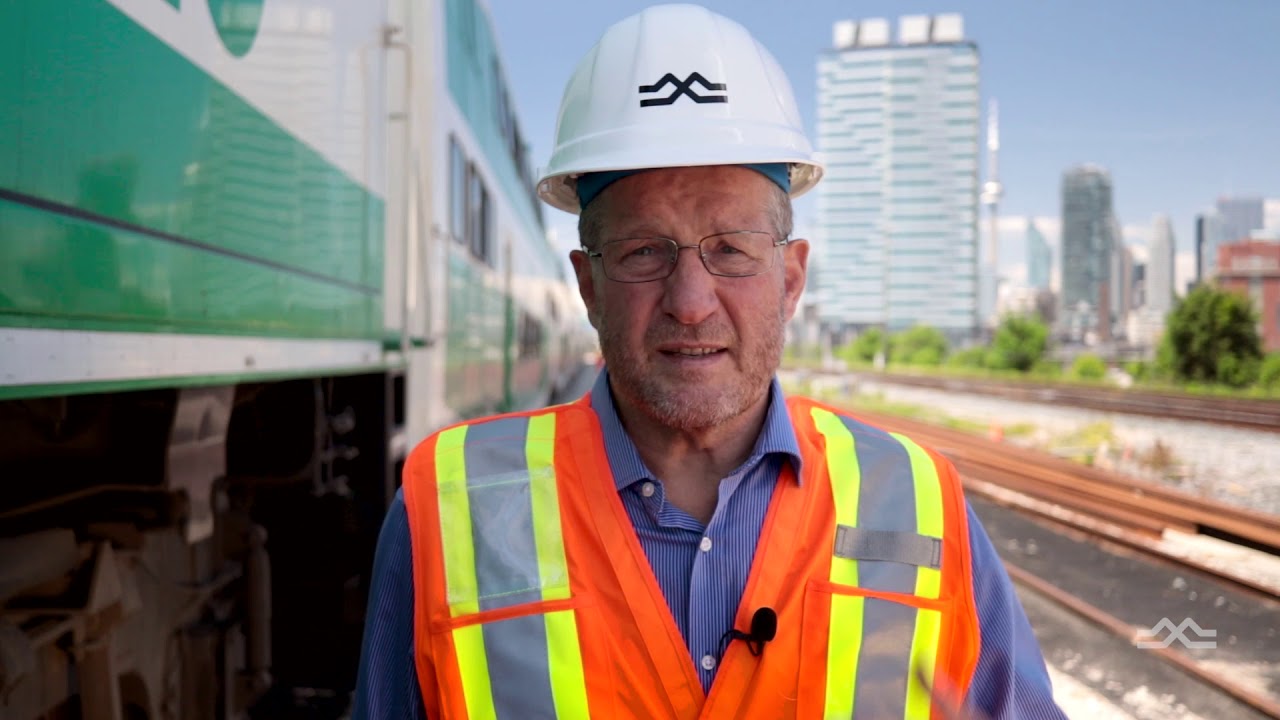 Metrolinx News readers have seen a lot about the ‘network effect’ and what it means for riders. It refers to the opportunities that come with a stronger, more flexible transit system, with seamless connections across the communities, more frequent service and new projects that will, once opened, reduce crowding on existing lines.

These projects are under way right now, and each one is part of a broader plan to make it easier to travel across [Ontario’s Greater Golden Horseshoe] region. Metrolinx President and CEO Phil Verster explains why he’s a believer in this connected vision for the future of transit.

Metrolinx is rewiring transit across the Greater Golden Horseshoe region to connect people and communities for the decades to come. Canada’s most dynamic transit system must expand with new routes and more frequent service to meet demand that is bound to increase with a growing population. And it must deliver new opportunities to travel quickly across the region—helping people get to work as well as their entertainment, dining and leisure choices.

Metrolinx is heading projects in Ontario that add up to the biggest investment and boldest changes of transit in Canadian history. From new subway projects and light rail transit routes in, around and even under Canada’s largest city, to a massive expansion of the iconic GO Transit network, the work is big and bold. These elements will all contribute to what Metrolinx President and CEO Phil Verster has dubbed the “network effect.” It’s part of a vision where riders will experience more convenient, seamless and connected travel.

Metrolinx News recently sat down with Verster and asked him to guide readers, customers, residents and business leaders into the future of transit in our region. Here, he explains why Metrolinx has a mandate to think bigger, act bigger, and connect the entire region.

What is the first thing that comes to mind when I say network effect?Verster: Customer choices. The big benefit of a network effect is that having different modes gives customers real choices on how they travel. If people have to make difficult and inconvenient choices—whether it’s about finding a parking spot at the station, making connections, or using a bicycle for the last part of the trip—then we have to find ways of making it easier. But when we have easy transfers between buses, the subway and GO trains—and even bike sharing at our stations—we are creating more of a network effect. When you think of a network effect in internet terms, as more people use a product, demand grows and then people can use it more efficiently and effectively. This is a self-fulfilling cycle and having a network in transit is similar.

How soon will the network effect will be obvious to riders?
Verster: We have it already. We have a network. GO trains move along seven routes, including the Lakeshore West and Lakeshore East, with parallel bus routes that run similarly east to west and run further to the north. With Bike Share Toronto, you can pick up a bicycle at many of our stations. And our future plans include new links to partner services like the TTC, MiWay, Viva and DRT. This issue is how do we continue to build a network that gives even more choices, while moving people more effectively and efficiently. There’s already a network, and in the years to come, we’ll make it stronger, extend its reach further, offer new options to riders.

What will a better integrated network look like for the rider?
Verster: For a rider on a day-to-day basis, a transit network should be as seamless as possible. Transfers should be as easy. Transit should be simple to use and enjoyable as we focus on all the basics of customer satisfaction. We know that municipal agencies do a tremendous job of helping riders criss-cross cities. Metrolinx is connecting everything we build to those existing systems as we double the size of Toronto’s subway network, quadruple the size and reach of the LRT network and double the intensity of the GO system. All of this expansion is being designed to connect and give riders more options.

How is our region’s transit network evolving?
Verster: We are building a frequent rapid transit network that consist of subways, LRTs, buses and on-demand mini transit solutions. As we move forward, rail will always be important, and we need more rapid bus services, too. The idea is to expand the network by adding main arteries. How to build that network is going to be an interesting challenge in the years to come. The arteries may connect to autonomous, self-driving vehicles or smaller buses that allow for Uber-type, or on-demand service. But that step will follow the phase we are in now, which is to build the network’s arteries.

How has Metrolinx changed in recent years?
Verster: We’ve become much more of a business rather than an agency. Being a business in transit is crucially important. You don’t make right decisions simply because you’re an agency. You make the right decisions because you are thinking as a business. That’s how we’ve strengthened our commercial resources and our project delivery resources. We’ve also significantly expanded our safety awareness and safety culture to make sure we can deliver transit in the best possible way. And we’ve put a massive focus on customer satisfaction because that’s what businesses do. When we look after customers well, we are better able to deliver a transit network for the region.

You have talked about a long-term plan to reconfigure Union Station tracks, replacing 12 relatively narrow platforms with seven broader walkways. How will this contribute to the network effect?
Verster: It’s about ease of transfer and ease of movement. With the narrow platforms we have at Union today there is a bottleneck as it takes time for to passengers get off the train and across the platform. But once you get down to the concourse it flows easily. When the platform is full you can’t bring the next train in, because there is nowhere for the people to go. To improve pedestrian flow, we need wider platforms so people will be able to move off of the platform easily. Whether they are walking out to an office or connecting to the TTC, we want people to move easily through the station. This will prepare us for GO Expansion, when we anticipate we’ll have 43 train trips per hour moving through Union Station in peak period, compared to 23 before COVID. Getting people through the station faster is part of plan to give riders a better travel experience.

Metrolinx plans won’t just put stations in established areas, but also in places like East Harbour, which are posed for development. What is the advantage of planning stations before economic growth in the surrounding area?
Verster: Transit makes growth happen. It’s a requirement for many businesses. So, we don’t just bring transit to where it already exists. Look at East Harbour, it has a very real access problem. It’s close to downtown, just over the Don River, but it’s difficult to get there by car. With the Ontario Line, it will be easy to get to work or a home there, and it’s going to be a superb Transit Oriented Development with space for new housing and jobs. When we put our plans together it is with a significant regard for the economics of transit. Transit, by its nature, drives economic growth. Examples like Yonge North Subway Extension or East Harbour on the Ontario Line will bring significant economic development to those parts of the city. As these areas grow, connections to and through them will be very important to our network.

How is the role of a provincial transit agency different from its municipal partners?
Verster: There are two really important levers we have in making the network effect possible. First, there is the opportunity to put plans together that look to the future and bring our region’s long-term transit requirements to life for today’s decision makers. Because we are putting those plans together now, we can create networks for the future. The second way we influence is through delivery. That’s how we make it happen. Whether it’s delivery of our capital plan or GO services, we are getting that network set-up.

How do you see Metrolinx working with the TTC and other local partners to deliver the network effect?
Verster: Our role relative to transit authorities, transit agencies and the TTC specifically is one of partner. And I would say it is to be a supporter. We need to help our partners to be successful. That’s one of the reasons we’ve made such substantial changes to PRESTO. We must listen to the other agencies, understand their needs and support their operations to be effective and successful. Where we are delivering capital programs we are supporting agencies for the future. The TTC is our biggest customer and I’m very respectful of Rick Leary and his organization. There are fantastic people at the TTC. They move a lot of people every day and it’s very important we keep on helping them as we work together to build a stronger network that offers riders more choices.

Does the recent experience with people working from home impact Metrolinx plans for the future?
Verster: The world is changing all the time and the pandemic has brought a different type of change to the whole world, to the way people think and behave. But change is part of what we do. People are going to live their lives, connecting with each other, going places and doing activities. That means transit is always going to be needed. We may see changes in when people travel, or how frequently, but people will continue to need and use transit. What we need to do, in all of our plans, is create capacity and make it flexible capacity so we can move people across the network to wherever they want to go, whenever they want to go, and that’s what we are doing.