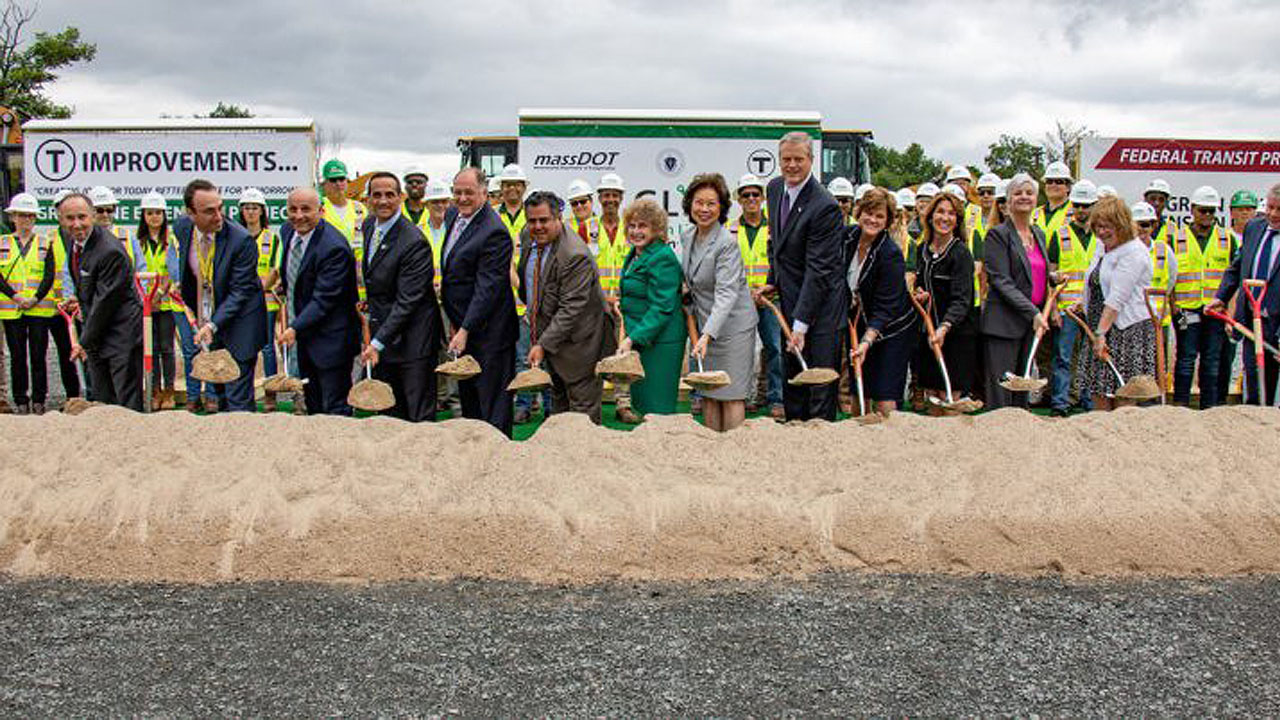 A second infusion of federal funding lent a festive atmosphere to kickoff for the latest expansion of Boston's transit system.

A groundbreaking ceremony was held for the Massachusetts Bay Transportation Authority Green Line Extension (GLX) where officials from the U.S. Department of Transportation said $225 million in federal funding had been released to the project.

Federal, state and MBTA officials celebrated the GLX groundbreaking on June 25, which was held at the future site of Union Square Station in Somerville. The project will extend the Green Line approximately 4.7 miles along two branches from a relocated Lechmere Station in East Cambridge. Approximately one mile of the extension will run parallel to the Fitchburg Commuter Rail Line to Union Square in Somerville and approximately 3.7 miles will run parallel to the Lowell Commuter Rail Line to College Avenue in Medford. Seven new stations will be constructed as part of the project, including the relocated Lechmere Station, along with a new vehicle storage and maintenance facility in Somerville. Once completed, peak service trains will operate every five to six minutes to downtown Boston.

“The Green Line Extension will improve access to education, housing and job opportunities across the entire MTBA system,” said Massachusetts Gov. Charlie Baker. “Our administration is grateful for the collaboration and support we have received from Secretary [Elaine] Chao and all partners at the federal, state and local level to reach this milestone and begin a project that will have a transformational impact on this region of the commonwealth by accommodating riders and spurring economic growth.”

In January 2015, a Full Funding Grant Agreement (FFGA) between the MBTA and the Federal Transit Administration was signed that established the scope of federal participation in the GLX project. Under the FFGA, federal dollars will fund approximately $996 million of the revised budget of $2.3 billion. The first installment of the federal funds was released in December 2017 and the second $225 million installment was released on June 25.

The Green Line Extension was procured through a framework that set strict limitations on the project’s total cost, which is estimated to be $2.3 billion, while allowing bidders to include additive options ensuring the MBTA could procure a project that maximized the benefits without jeopardizing its budget.

In November 2017, the MBTA’s Fiscal and Management Control Board voted unanimously to award the design and construction contract to GLX Constructors, which is comprised of Flour Enterprises, Middlesex Corp., Herzog Contracting Corp., and Balfour Beatty Infrastructure.

Officials said design and pre-construction work, such as vegetation clearing and utility location along the right of way, is currently underway. Heavy construction is expected to start this fall with the project scheduled to enter the testing phase in late 2020 and the extension operational in late 2021.