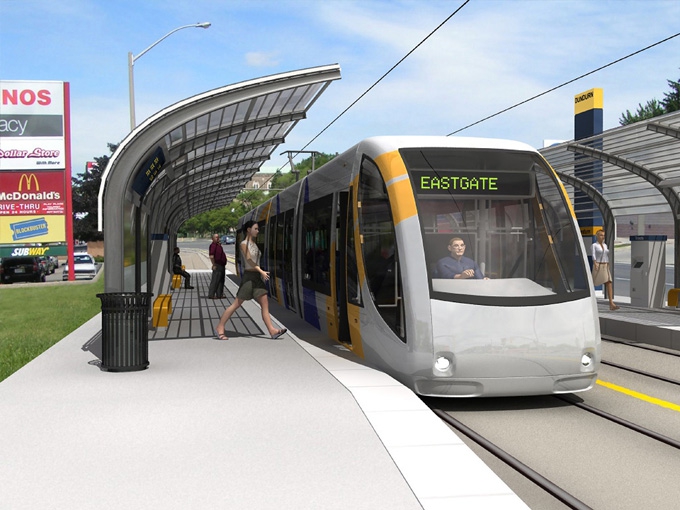 The Hamilton, Ontario LRT situation took another bizarre twist recently with Metrolinx, the provincial transit agency, agreeing very reluctantly to City Council’s request to have the local municipally owned transit agency, the Hamilton Street Railway, operate the LRT. The crosstown line project was scheduled to begin construction in 2019, and open by 2024.

Metrolinx’s original LRT plan had been for a DBFOM (Design-Build-Finance-Operate-Maintain) model. Requests for qualifications (RFQs) under this scenario had already been sent out to potential bidders; the next step would be to select a single overall contractor to manage all of the details, including the engaging of subcontractors. This process has been followed for the completed LRT in nearby Kitchener-Waterloo, Ontario.

The HSR proposal came about in the early summer of 2017 when the agency’s union, Local 107 of the Amalgamated Transit Union (ATU), launched a forceful and emotional campaign to “Keep Transit Public.” Their request included not only operation of the LRVs, but maintenance of the cars and physical assets (tracks, overhead, substations, etc.).

The ATU pointed out that both the Eglinton Crosstown LRT in Toronto and Ottawa’s Confederation Line will be operated (but not maintained) by the local transit agencies, the TTC and OC Transpo, respectively. However, in both cases these decisions were made well in advance. In Hamilton, the ATU was criticized in the local press for inserting itself in the process at the 11th hour.

The union request was approved, although not unanimously, by City Council on August 18, 2017, and forwarded to Metrolinx.

A provincial election is due in mid-2018 and a municipal one in the fall of next year. The Council decision was apparently made quickly, without due consideration of the potential costs to the city.

The HSR has no recent experience with operating an electric transit system; the streetcar system was abandoned in 1951, while the trolley coaches rolled their last mile in 1992. Additional staff would have to be located, hired and trained, at city expense.

On Nov. 24, 2017, Hamilton City Manager Chris Murray received a lengthy reply from Phil Verster, the new President and CEO of Metrolinx. The letter has since been made public.

Verster summarized the situation very thoroughly, pointing out the obligations that the HSR would incur in operating the LRT, both logistical and financial, including liability. He strongly urged the city to leave the procurement as is, but agreed to allow HSR operation (but not maintenance) if Council insisted. Metrolinx would remain as the project owner.

If the city decides to pursue municipal operation, it could delay the project by up to five months, as new RFQs would have to be drawn up and reissued. Hamilton would also need to immediately hire management and technical staff with LRT experience, at an estimated cost of $750,000 annually.

After receipt of the letter, Council somewhat belatedly requested staff to report on the potential costs of municipal operation.

In ending his letter, Verster said that Metrolinx would require Council acceptance of all the conditions therein by Jan. 24, 2018; otherwise, the agency would continue to proceed as originally planned.