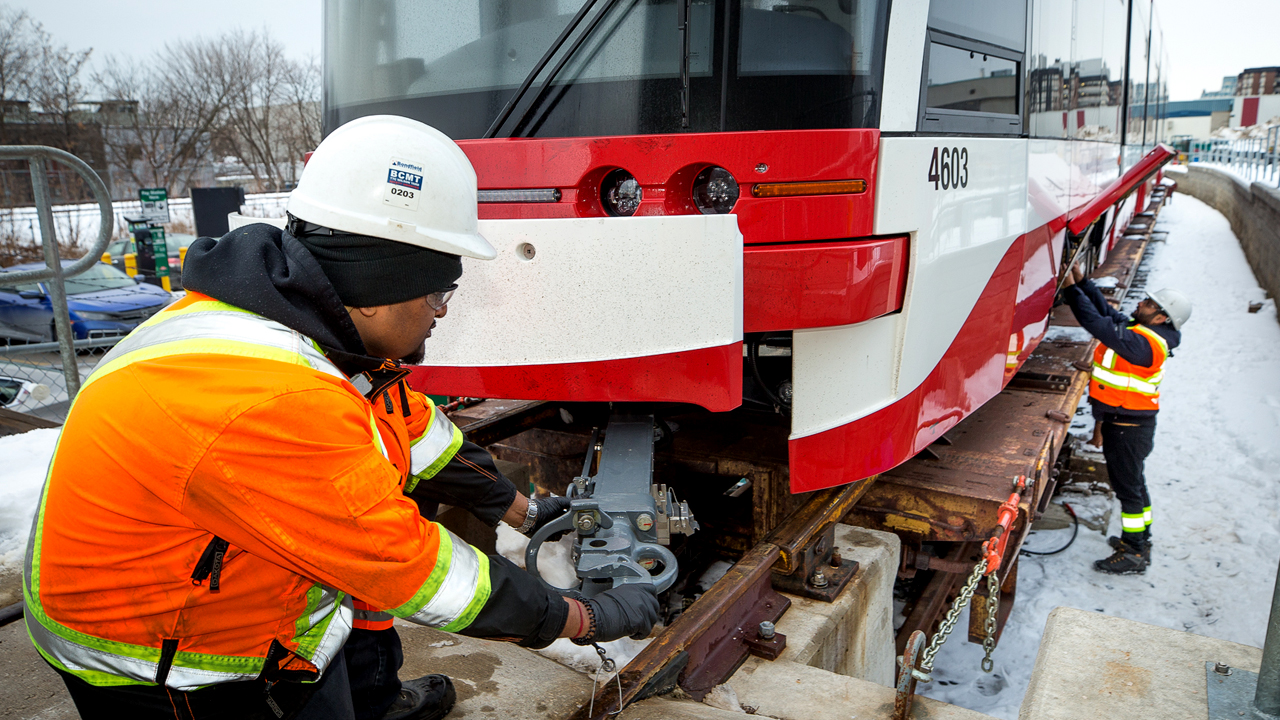 Bombardier Flexity Outlook 4603 is the last of 204 cars delivered to the TTC. All photos courtesy the Toronto Transit Commission.

During the week of Jan. 20, 2020, the Toronto Transit Commission (TTC) received the last unit, car 4603, of its 204-vehicle Flexity Outlook streetcar order. The LRV was unloaded at the Commission’s central Toronto Hillcrest Shops complex after a journey of nearly 900 miles on Canadian Pacific from Bombardier’s Thunder Bay, Ontario factory. The bulk of the order was built there, with eight coming from the company’s Kingston, Ontario plant (originally, 30 were planned). The contract was scheduled for completion by Dec. 31, 2019.

The Flexity order was beset by several significant missed delivery deadlines, a strike at Thunder Bay, major quality problems, tumultuous relations between Bombardier and the TTC, a $50 million lawsuit (settled out of court for an undisclosed amount) in producing  and continually changing senior management at the manufacturer. The TTC, due to the late deliveries, was forced to overhaul, at considerable expense, some of its existing Canadian Light Rail Vehicles (CLRVs) and Articulated Light Rail Vehicles (ALRVs) to fill the gap. The CLRVs have now all been retired.

Much of the problem was attributed to Bombardier’s supply chain problems, with components ordered from many European and Asian companies as well as North American firms. In addition, assembly work on the Thunder Bay shop floor was found to be inefficient, and had to be realigned.

Another issue was Bombardier’s decision to have some welding work performed at its Mexican plant, to take advantage of that country’s significantly lower labor rates. This proved to be false economy, after sub-standard work resulted that caused major final assembly problems. As a result, 67 of the TTC cars have had to be recalled to Bombardier’s La Pocatière, Quebec plant for correction, at the company’s expense.

The car’s handicapped access ramp needed to be redesigned to meet TTC requirements; this was also a time-consuming undertaking.

The TTC LRV is a modified version of the standard Flexity Outlook, in service in cities such as Brussels, Marseille and Geneva. Modifications included the ability to negotiate Toronto’s tight radius (36.09 minimum turning radius) legacy curves; single blade track switches; track gauge of four feet 10 7/8 inches; and gradients up to 8%. The cars are single-ended, as all TTC streetcar routes have turning loops.

The C$1.2 billion Flexity contract was awarded by the TTC on June 26, 2009. The only other bidding finalist was Siemens, at a significantly higher price; it was later observed by some that this company may have had a better understanding of the challenges involved in designing and building a modern streetcar for Toronto’s legacy infrastructure.

Acceptance of the early arrivals was delayed due to quality problems. These included door, braking, propulsion and communication systems, as well as parts from Mexico not fitting properly.

The TTC had considered ordering an additional 60 Flexities to accommodate growing ridership, and had an option valued at $361 million. However, this has not been exercised, partly due to lack of funding.

The Flexities have dominated Toronto’s streetcar system since December 29, 2019, when the last of the 40-year-old CLRVs were retired. They have proven popular with the riding public, for their air conditioning, smooth ride, large windows, higher capacity and easy access for handicapped people.