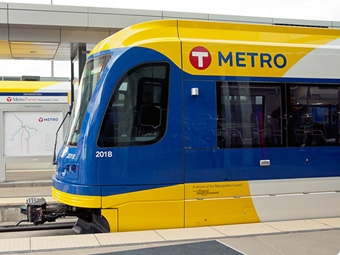 Light rail transit ridership on the new Green Line (Central Corridor) in St. Paul has been strong, exceeding some projections, in its first weeks of operation, even as complaints about trip times have surfaced.

Average weekday ridership on the Green Line from Aug. 4 to Aug. 8, 2014, was 35,369, bolstered by customers attending a pre-season Minnesota Vikings football game. TCF Bank Stadium, located on the University of Minnesota campus, is accessible through the new service. Somewhat ironically, the university was a primary adversary of the Green Line’s implementation.

In an email, Metro Transit spokesman Drew Kerr stressed that initial ridership projections were “conservative.” Metro Transit and the Metropolitan Council epect ridership to increase with the beginning of the school year next month.

Local observers report that Green Line trip times often are hampered by a lack of traffic signal pre-emption, generating rider complaints. Trip times on the full 11-mile, 23-station route linking downtown St. Paul and downtown Minneapolis has been cited as an average of 52 minutes, though not all riders travel the full route length.

Area rail advocates say the City of St. Paul has been reluctant to sychronize traffic signals to benefit the Green Line, and that doing so would reduce total route travel time by as much as five minutes.