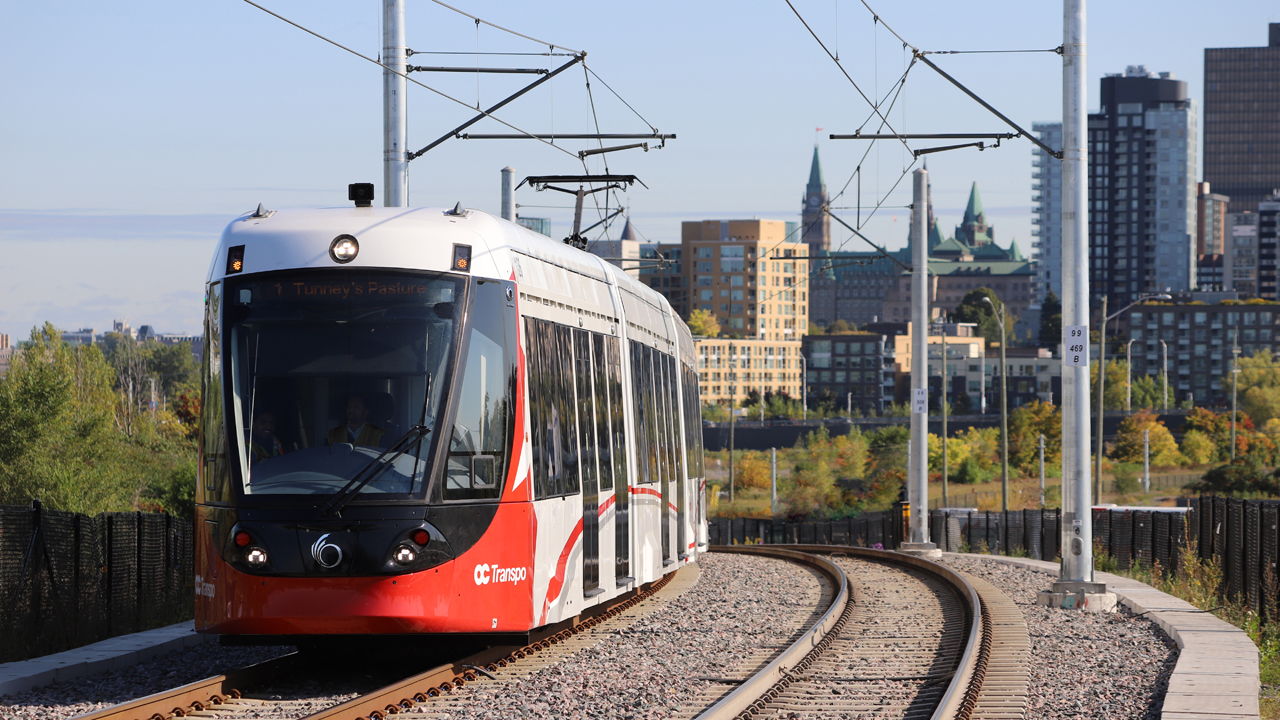 Work is progressing on the two extensions to Ottawa, Ontario’s crosstown Confederation LRT Line, opened in 2019. A third major rail transit project currently under way in the Ottawa area is extending and upgrading the DMU Trillium Line. Scheduled for completion in 2023, this improvement should significantly boost ridership.

The Confederation Line runs from Blair Road in the east, to Tunney’s Pasture (a government offices center) in the west, traversing downtown in a tunnel (see map below). Equipment used comprises Citadis Spirit LRVs from Alstom. The eastern extension will bring rail service to Trim Rod station, in the suburb of Orleans. Some of the area along the route remains undeveloped, but this will likely soon change. There is already a considerable amount of traveling into Ottawa from the east, which will be captured by the new LRT. Ottawa’s population is predicted to reach 1.14 million by 2031. Opening of the extension is planned for 2024.

Alignment of the Trim Road extension is quite simple, being in the middle of Highway 174. This, of course, continues a trend that began with the Chicago Transit Authority’s Congress Expressway media strip line, opened in June 1958. A curving ramp takes the tracks from Blair Terminal into the median.

Work began in 2019. This initially involved preparation of the highway for the LRT, including a new bridge, relocation of ramps, etc. The right-of-way is about 50% complete at this time. Track laying will commence in 2022 and be largely completed by year’s end. Bases have been poured for overhead catenary support towers, drainage systems installed, as well as gas piping for switch heaters, and substations. Station construction is in the early stages, with site preparation at some locations and concrete poured at others.

Vehicle testing is scheduled to begin in April on a section of energized track between Montreal station and a location west of Jeanne d’Arc station.

The east extension will be 12 kilometers (7.5 miles) long, and provide five new stations.

The west extension of the Confederation Line, which is progressing well, is a much more sophisticated undertaking. It is 15 kilometers (9.3 miles) long and involves 15 new or converted stations. The alignment is in both a former busway, and new tunnels, two 3 kilometers (1.86 miles) in length, to the south. The first busway section was opened in 1983, and from the outset was planned for ultimate light rail conversion, as demand warranted.

Part of the busway is on the right-of-way of Canadian Pacific’s (CP) former main line west from Ottawa to Toronto and Western Canada. The LRT also parallels Highway 417, the main highway into Ottawa from the west. Conversion of the busway (known as the Transitway) to LRT involves upgrading stations, removing bus access roads, constructing diversion roads for buses, and in some cases building a new bridge, as at Holly Acres Road.

The terminal of the main line is at Moodie Drive. The branch diverges from the main line at Lincoln Fields station, ending at Algonquin Station (near a major college campus). Algonquin Station is near the Southwest Transitway, which could be the route of a future LRT extension, serving part of the city currently lacking rail transit service. Both OC Transpo and the city of Ottawa prefer keeping the LRT off city streets. This was also originally the case in Edmonton, but the policy has changed with their Valley-West Edmonton project. The steelwork for Algonquin Station was erected this past winter.

A cut-and-cover tunnel is being excavated along Richmond Road, and has proceeded to the point of concrete pouring. Another section of tunnel, beneath the Sir John A. Macdonald scenic parkway, is about to get under way. The Parkway Tunnel is 3 kilometers (1.86 miles) long, while the shorter Connaught Tunnel is 270 meters (295.28 yards). The parkway tunnel is necessary as the National Capital Commission, the roadway owner, objected to a surface alignment.

A total of 38 Alstom Citadis Spirit LRVs will serve the extensions. This brings to 72 the number owned by OC Transpo. Initial assembly of the new LRVs occurred at OC Transpo’s existing Belfast Road shops, just east of downtown. The balance of the order is being completed at Alstom’s Brampton, Ontario plant, just northwest of Toronto.

Additional track has been laid in the Belfast yard, so that the facility may ultimately accommodate 66 Spirits.

Work should be in progress on all the new stations by the end of 2022; most are in the early stages of construction. A new Light Maintenance and Storage Facility has been built just west of Moodie terminal station; most of the buildings are already complete. The yard will accommodate 24 LRVs initially, with the potential for a phased expansion of 90 cars ultimately. However, Belfast Road, located just east of downtown Ottawa, near the approximate center of the system, will remain the heavy maintenance shop. It has a siding connection to an adjacent VIA Rail Canada line, for possible future LRV deliveries. The Alstom plant in Brampton, although beside a railway, no longer has a connection.

The west extension generally serves a more densely populated area than its eastern counterpart, and thus should have greater ridership levels, partly depending on returns of people to employment sites. Opening is planned for 2025.

The DMU Trillium Line’s (the trillium is Ontario’s Provincial Flower) extensions will serve the Macdonald-Cartier International Airport (via a newly-built branch) and, on the main line, the rapidly-developing Riverside South housing development near the Limebank terminal station, beyond the present terminal. In total, 16 kilometers (9.94 miles) of track and eight stations will be added to the operation. Construction began on May 3, 2020, necessitating that the 8-kilometer (4.97-mile) original line be temporarily closed for the duration, with replacement bus service.

The Trillium Line was conceived as a pilot project. It came about because a little-used CP secondary line was available, from the Ottawa River southward through the city’s west end. The startup cost was C$21 million, chiefly for rolling stock, station construction (relatively basic structures), a new passing siding, and payments to CP, including use of its Walkely Yard maintenance facility. The trackage used is a remnant of an Ottawa-Prescott line, that terminated at the St. Lawrence River. Minimal nighttime freight service was continued for a period, with moveable platform extenders that allowed for freight car clearance.

The northern terminus of the line was at Albert Street, a major east-west thoroughfare. A walkway connected the basic station to the Bayview Station of the east-west Transitway (busway). The southern terminal was Greenboro Station, near the South Keys shopping center, and with access to the Southeast Transitway.

Service, at 15 minute intervals, was provided by three Bombardier Talent BR643 low floor trainsets. The engineer was the sole on-board employee, apart from roving fare inspectors. The main on-line traffic generator has traditionally been Carleton University, at the line’s approximate mid-point, and location of the first passing siding.

In 2015, six new Alstom Coradia LINT trainsets were bought to replace the three Bombardier units, one of which had been withdrawn in 2014 due to derailment damage. Upgrades to the signal system, train controls, stations and tracks were made at this time, with 12 minutes frequencies introduced.

Three years later, OC Transpo ordered seven new Swiss-built Stadler FLIRT trains that were required for the approved extended service. The first of these units arrived on Oct. 7, 2021, and began testing on Jan. 15, 2022. The order is expected to be completed by mid-2022. The Stadlers are 80 meters (87.49 yards) long, double the length of the Coradias, which will operate alongside them.

The extension southward follows the old CP right-of-way, utilizing new track, to Leitrim Road. At this point it swings westward on a new elevated embankment to Limebank Station. There are no grade crossings, per federal government requirements. The embankment and bridges are substantially complete. Although the CP trackage had been lifted at Leitrim Road, the right-of-way is publicly owned for a considerable distance southward. However, there is insufficient population density to warrant passenger rail service along this route.

The 4-kilometer (2.49-mile) airport branch diverges from the main line at the new South Keys station, with one intermediate station, at Uplands. It is primarily on an elevated structure. The terminal station is being incorporated into the renovated airport terminal, at the Departures level. There is one passing siding. Service to and from the airport will be a shuttle operation to and from South Keys, where passengers will transfer to main line Trillium trains.

Other Trillium improvements include lengthening of the existing passing sidings and station platforms; a new bridge over the VIA Ottawa line, replacing the former Ellwood diamond; rehabilitation of the Rideau River bridge south of Carleton Station, and the Dow’s Lake tunnel; signal systems upgrading to permit Positive Train Control; new stations at Gladstone and Walkely; new pedestrian tunnels and overpasses. The original, rudimentary station at Bayview has been replaced by a state-of-the-art facility that permits improved transfers, since 2019 to LRT trains. The LRT line is at a significantly higher level here, necessitating elevators.

As part of the project, OC Transpo purchased the Walkely Yard from CP. New maintenance buildings are being erected beside the existing structures. The yard was originally built for CN in 1955, by the National Capital Commission, to replace a facility required for the massive railway relocation project then getting under way.

Construction of the Trillium Line extensions, and related improvements, are by a subsidiary of SNC Lavelin. The contract also provides for the maintenance of the line for 27 years.

This would be the most likely future extension to the Trillium Line. The Prince of Wales bridge that took the CP across the Ottawa River to the Province of Quebec is still intact, a few hundred meters north of the Bayview Terminal. It connected the Prescott Subdivision with the railway’s North Shore secondary line to Montreal (since sold to a new operator), as well as two since-abandoned branch lines. The bridge is now owned by Ottawa; CP no longer has a presence in the region.

The communities in Quebec, across from Ottawa are, as elsewhere, growing rapidly. There has been periodic discussion between the various governments involved about extending Trillium service across the bridge to serve them, but to date no definite plans have developed.