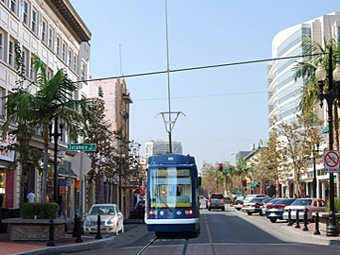 Several members of California's Orange County Transportation Authority, an entity strikingly reluctant to warm up to rail transit in past decades, continue to balk at supporting a streetcar line proposed to serve Santa Ana and neighboring Garden Grove.

The proposed $238 million line is being weighed by OCTA against “enhanced bus” options costing far less to implement.

“What makes it distinctively different from a bus? What am I getting that makes it unique?” asked OCTA Director John Moorlach at a meeting March 24, 2014, according to local media. OCTA Chairman Shawn Nelson, also skeptical, questioned why the streetcar’s cost has grown from roughly $23 million per mile in each direction to $29 million.

Not all OCTA directors are opposed to the project. OCTA Director Lori Donchak, a supporter, described the plan as an “incredibly well-managed project.”

The proposed route would link the Santa Ana’s train station, served by Amtrak and Metrolink trains, with downtown Santa Ana, the county seat, and the Orange County Civic Center, before reaching its western terminus at Garden Grove.

Santa Ana Mayor Miguel Pulido, who has actively advocated for the streetcar, has said relying primarily on the use of Measure M (sales tax) funds, rather than federal funds, would allow the project to be develop more quickly.

The Santa Ana Transit Vision website claims Orange County, Calif., is “the 6th most populous region in the U.S.,” also asserting that Santa Ana is “the fourth most densely populated city in the U.S.”