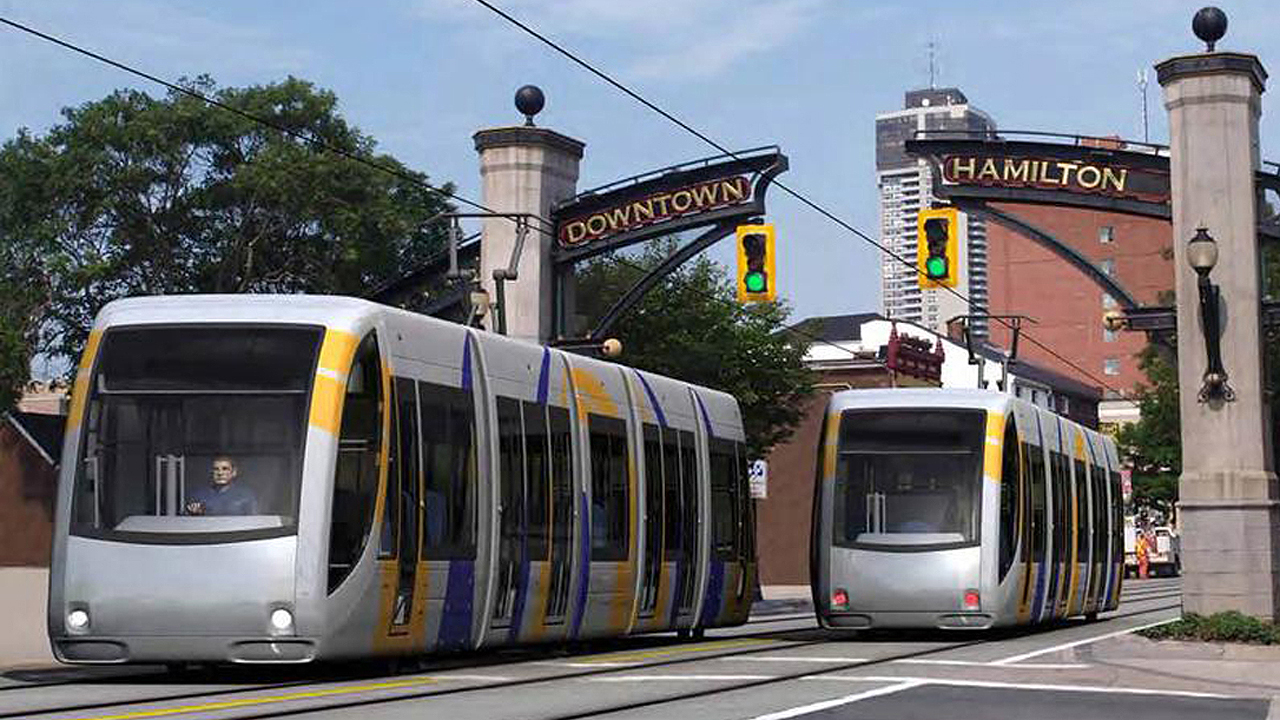 Construction of Hamilton’s 10-mile LRT should begin in 2019, for completion in 2024. It will extend from Eastgate Square, a major shopping center in east Hamilton, to McMaster University in the west, with 17 stops. Metrolinx illustration.

Two light rail new-starts in Canada’s Ontario province appear to be on diverging paths. Hamilton’s is at the RFP stage, while Kitchener-Waterloo’s opening has been delayed, again.

The Hamilton LRT project took another major step forward in mid-April, with the issuing of a Request for Proposals (RFP) to three shortlisted teams for the DBFOM (design, build, finance, operate, maintain) project. Infrastructure Ontario and Metrolinx jointly issued the RFP.

The choice was based on the evaluation of criteria as identified in a Request for Qualifications process that started in February 2017. Selection criteria included design, construction, maintenance and operational experience, plus the financial ability to deliver a project of this size and scope.

The shortlisted teams and their prime team members are:

These teams will provide proposals detailing how they would deliver the project. Following evaluation, Infrastructure Ontario and Metrolinx expect to select a preferred proponent, followed by contract awarding in 2019. A fairness monitor will oversee the entire procurement process.

Construction of the 10-mile line should begin in 2019, for completion in 2024. It will extend from Eastgate Square, a major shopping center in east Hamilton, to McMaster University in the west, with 17 stops. It will be entirely above ground, except for an underpass beneath a Canadian Pacific Railway line, in a center reservation.

The next milestone will be the signing of an LRT operating and maintenance agreement with the City of Hamilton. This will not take place until late 2018 or early 2019. 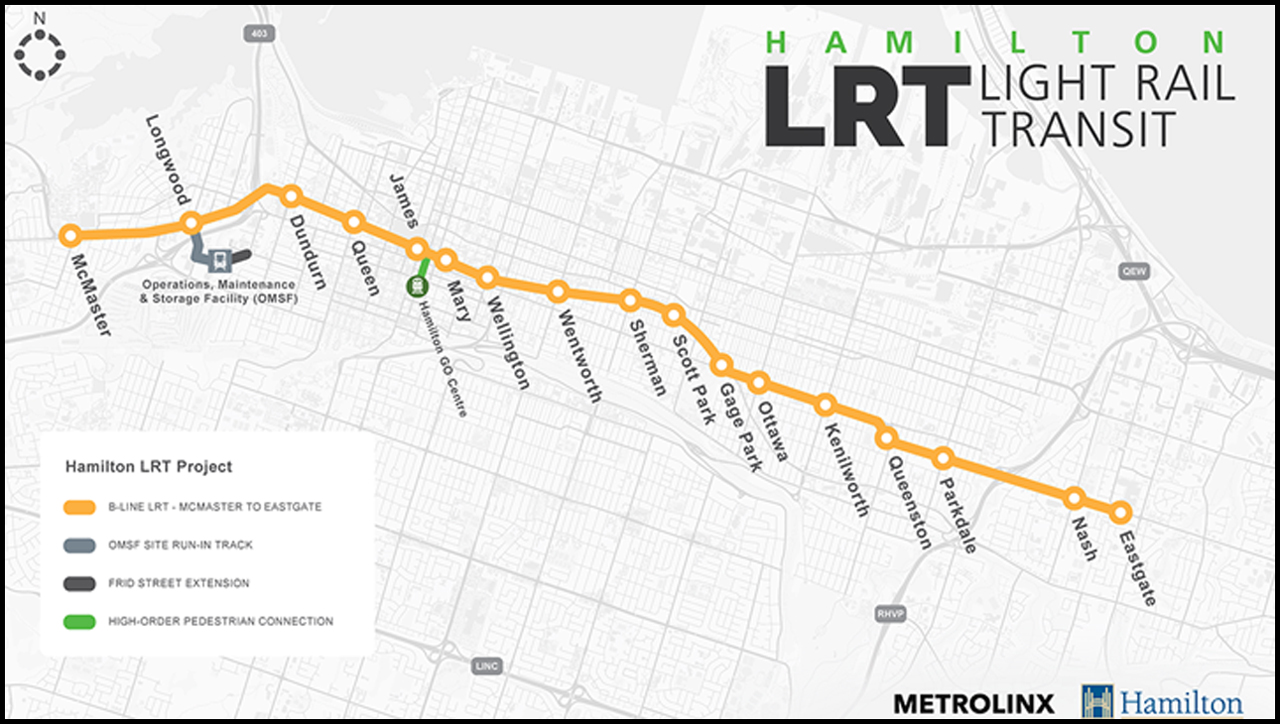 The opening of the Kitchener-Waterloo ION LRT line, which has been essentially complete since summer 2017, has been postponed yet again, to December 2018. It had originally been hoped to open the system in mid-2018, but continued late delivery of LRVs from Bombardier has meant postponing this date.

The manufacturer has experienced repeated production problems at its Kingston (Ontario) plant, where the line’s 14 Flexity Freedom cars are being assembled. The Kitchener vehicles were an add-on to a much larger order of Metrolinx’s for Toronto-area LRT lines, and included an option for 14 additional Flexities for Kitchener (the first Kitchener LRV came from the Thunder Bay plant).

Metrolinx altered its agreement with Bombardier in late 2017, inserting specific milestones for the delivery of fully functional cars to Kitchener, and financial penalties if the dates are not met. The original agreement specified delivery of all LRVs by December 2016; one car arrived, in incomplete condition, two months later.

At present, there are four cars on the property. It is hoped that the 14th will arrive by this June. After that, about six months are required to fully commission the system, install specialized equipment in the cars, test them in Kitchener-Waterloo for two weeks, and train operators and maintenance personnel.

Waterloo Region announced in December that the project’s construction cost had increased by C$50 million, for a total cost of C$868 million. Vehicle delays, the Region said, were to blame for almost half of the cost increase, adding that it would try to recover that amount from Bombardier.

The ION line extends 12 miles from north Waterloo to south Kitchener, from the Conestoga Mall to Fairview Park Mall. 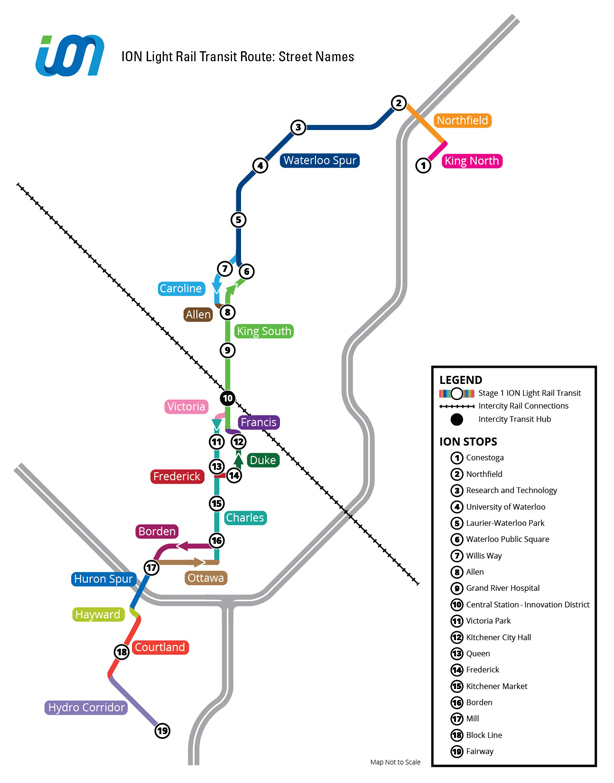