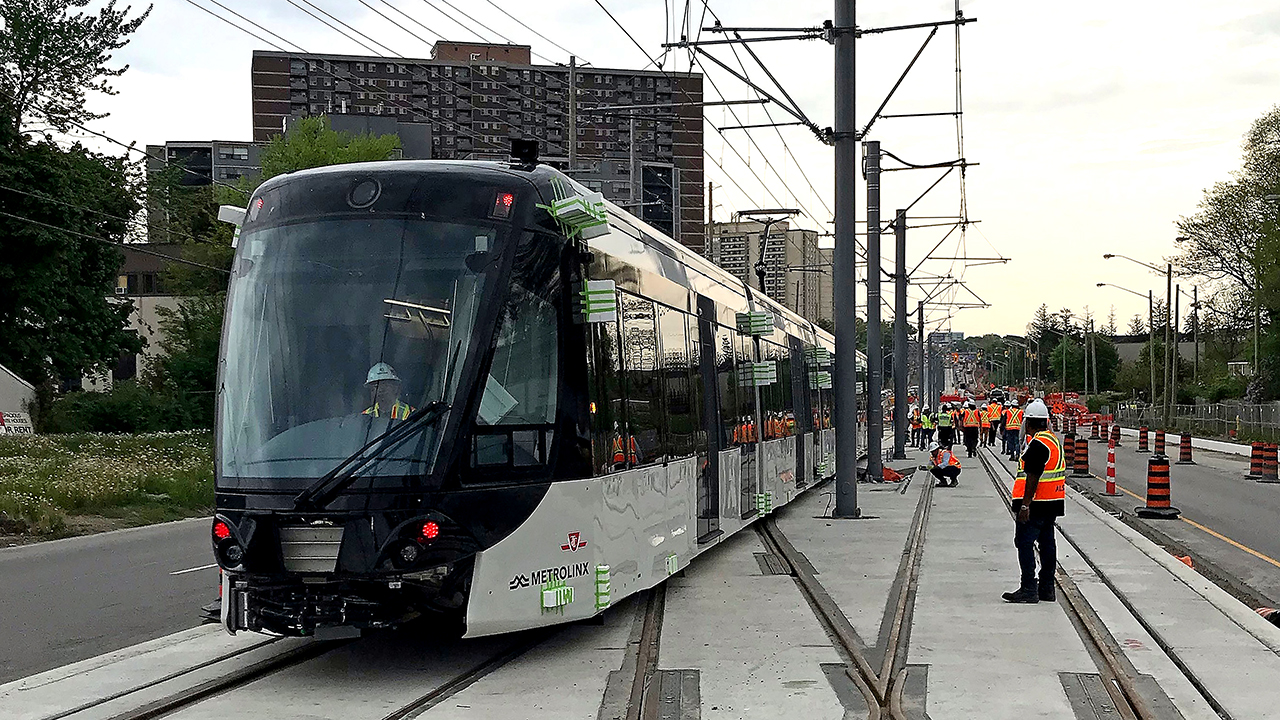 There are currently four LRT lines in various stages of construction in the Greater Toronto Hamilton Area (GTHA): Eglinton Crosstown, Finch West, Hurontario (Mississauga) and Hamilton. Of these, the Crosstown is the closest to being ready for passengers. However, at press time Metrolinx was still unable to confirm whether the line will be opened in Fall 2022, or early 2023.

This line, located in the northwest sector of Toronto, is proceeding well, thanks to a predominately surface alignment. It, like the Crosstown, is located on a major east-west thoroughfare. However, Finch Avenue West was widened in the postwar era, and has ample space for a center reservation. The terminal stations are the only underground structures.

This line will link Finch West station, on the TTC Spadina Subway extension, with Humber College, a major educational facility. The western terminal is located beside provincial Highway 27, a major road. There are numerous high-rise apartment complexes at several locations en route.

Excavation at the terminal stations was completed some time ago; structural and track work is in progress at both stations. Humber College station will be partly open air, yielding a significant cost savings. Finch West is above the existing subway station; a portion of its roof was reinforced during construction for this purpose.

Construction of the maintenance and storage facility is almost complete, allowing staff to move in soon. Two units of the 18-car LRV order have been received from Alstom’s Brampton plant, with dynamic testing in progress. A section of track has been completed along Finch for about three-quarters of a mile east of the yard and electrified to permit at-speed testing. Additional LRVs will be delivered by truck in the coming months.

Station construction is mainly complete on the section between Keele West and the maintenance yard, as is track installation. There will be 16 surface stations; concrete and structural work for 11 should be finished by year’s end.

Track installation is under way at three separate locations westward from the yard, nearing the halfway point. It proved necessary to rebuild the existing Humber River bridge for tracks. The majority of the trackwork is planned for completion by the end of 2022.

Opening of the Finch West LRT is tentatively planned for 2023.

This project has been plagued with numerous construction delays, and as a result, relations between Metrolinx and the contractor have been strained.

Connecting links with the three existing subway stations, Cedarvale (Eglinton West on the Spadina line), Eglinton (Yonge line) and Kennedy (Bloor-Danforth line) have been built, and finishing work (tiling, etc.) is under way. The elaborate above-ground station structures have been essentially completed structurally, with some finishing work still required.

About three-quarters of the line is in bored tunnel, due to the street’s narrow width; a short section at the western end is elevated, while several miles of the Don Mills and Scarborough sections are in a surface center reservation.

The 76 Alstom Flexity Freedom LRVs ordered for the Crosstown are all on the property, at the Mount Dennis storage and maintenance facility at the western terminal. The property, incidentally, was formerly occupied by the head office and plant of Kodak Canada, which became redundant due to the digital revolution. Testing of the train control and signal system continues, with LRVs operating at full speed for the length of the line.

Testing and commissioning of the Central Communications System is occurring across the entire project. This includes the public address system, transit information signs, and closed-circuit TV. TTC’s David Gunn Operations Control Centre (named for the former TTC Chief General Manager) at the Hillcrest complex at Bathurst and Davenport, which will oversee Crosstown operations, can now monitor the CCTVs, make announcements and observe vehicle testing. The LRVs, by the way, carry TTC heralds.

The Crosstown will serve a generally densely built area, including numerous apartment complexes that are likely to be increased in number after the LRT opens.

This project is the least advanced of the three, due to a later start. It will extend from the Port Credit GO Transit station, just north of Lake Ontario, northward to an on-street terminal just north of Steeles Avenue, in the adjacent city of Brampton. It is a basically straight-line, north-south alignment in the center of Hurontario Street (Provincial Highway 10).

The LRT will be essentially a surface operation, except for certain highway crossings. That said, an elevated section takes the tracks off Hurontario, connecting to the City Centre station on Rathburn Road. It was originally planned to have a loop encircling the large City Centre business-shopping-government complex, but this was deleted as a cost-saving measure.

The Hurontario LRT line has four major east-west highways to cross. This will be accomplished via underpasses, new bridges  and use of an existing bridge across Highway 401, the major road across Southern Ontario.

The Port Credit station is an underground facility. Crews are preparing to pour concrete for the first portion of the service level base of the station. The station will connect with GO Transit’s Lakeshore West rail line to Union Station, to which it is situated at right angles. The short tunnel section that takes the LRT out onto Hurontario is essentially complete, after being pushed beneath the railway tracks.

Following a lengthy process of utilities relocation, Hurontario is ready for track installation. This has already begun on a short section between Britannia Road and Matheson Boulevard. Upon completion, rails will be extended northward to the terminal at Steeles Avenue.

Work on the surface stations will start later in 2022. All will be center platform, apart from the side platform City Centre station.

The maintenance building is finished, with track installed. Work is following in the yard area. The new facility is located, for reasons unknown at present, in a field about three-quarters of a mile east of Hurontario. A lengthy access track will therefore be needed. There is room on the west side of the property for future expansion.

The first of 28 Alstom Citadis Spirit LRVs is due to arrive in 2023. They will be trucked over from Alstom’s Brampton plant, located a short distance away.

Hurontario is, generally, a very wide thoroughfare, except for its southern end. The surrounding area is densely built up, with office and apartment towers, although there is still a small amount of vacant land, available for development. Mississauga is a very large area bounded on the east by Toronto. It is an amalgamation of several existing towns, supplemented by considerable new construction over the past 50 years.

A tentative opening date of late 2025 has been announced for the Hurontario LRT line.

The fully approved, 14 km (8.7-mile) Hamilton LRT project will likely not have shovels in the ground until late 2023. It could be negatively affected by record inflation rates, some of which, such as gasoline, relate partly to Russia’s invasion of Ukraine. The result could be that the C$3.4 billion budget is exceeded. The federal government has offered to cover any cost overruns, but there are obviously limits.

Little work has yet commenced; contract awarding will not take place until 2023. This is partly due to Metrolinx’s decision to break up the project into numerous small contracts, for better oversight. This is an attempt to avoid the major problems that occurred with the Eglinton LRT project, which was carried out with a single major contract.

To date, many of the small properties required for station sites have been bought and demolished, with more remaining to be acquired. A start has been made on utilities relocation, as the route is primarily on city streets. The storage and maintenance facility will be on the site of the former Toronto, Hamilton & Buffalo Railway roundhouse, currently a brownfield with the residue of decades of occupation by steam and diesel locomotives.

The two major projects to be started will be the Longwood Road LRT/motor traffic bridge, and the LRT-only bridge across the Chedoke Valley at Dundurn Street. The latter will be a complicated structure, crossing not only provincial Highway 403, but also several access ramps as well.

The existing Longwood Road bridge dates back to the 1930s and is at the end of its lifespan. In fact, as this is written, emergency repairs are being made to the road deck. It will be demolished, and the new bridge, again crossing Highway 403, will be built on site. The tracks are required here for LRV operations and maintenance facility access.

However, the contract for design work for these structures has yet to be awarded. The same is true of the operations and maintenance facility, although presumably the plans for existing Metrolinx LRV structures can be used.

The LRV supply contract may likely be awarded to Alstom, which has three plants in Ontario (Brampton, Thunder Bay and Millhaven). The Brampton plant is the closest to Hamilton, about 60 miles away. If the cars come from Millhaven or Thunder Bay, delivery could be by rail, as the maintenance yard is bordered by a Canadian Pacific line. The number of cars to be ordered will be influenced by the design chosen, Flexity or Citadis, the latter being significantly longer. A section of track on Main Street West is a likely testing location, as it is close to the shop.

Rail will likely be sourced in the U.S., as it has not been rolled in Canada for decades. If delivered by train, it could be unloaded at a level crossing in the east end, and at the maintenance yard site. Standard LRT rail in Canada at present, with exceptions, is 115 pounds. Products such as reinforcing steel, girders, etc. could be obtained locally, as Hamilton still has a steel industry.

It is to be hoped that the well-documented supply chain issues that have been plaguing North America in recent years will not significantly delay the LRT project, and result in major cost increases.

One possible joker in the deck could be the Hamilton mayoral election taking place in October 2022. One of the candidates, Robert Bratina, a former mayor and federal Member of Parliament, has traditionally held a very strong anti-LRT stance. The current pro-LRT mayor, Fred Eisenberger, is not running, although the three other candidates—Ejaz Butt, Steven Hencze and Keanin Loomis—may be in favor. 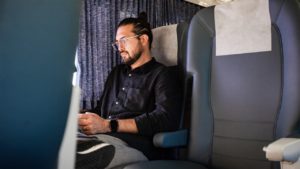 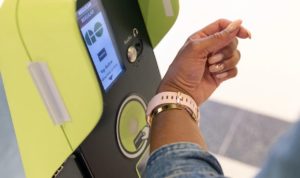