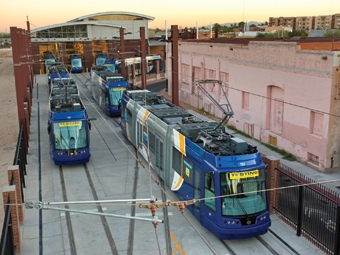 As North American cities make a comeback, and make their true transport needs known, streetcars and light rail transit systems both take the lead and go along for the ride.

Five years ago, only the U.S. Pacific Northwest sported new streetcar lines, dismissed by many as an Ectopia fixation, or of a sepia-tinted past per New Orleans’ venerable fleet. Many, even within the rail industry, simply deemed streetcars as a mode not worthy of North America’s serious consideration.

Last month, Tucson, Ariz.’s Sun Link fleet (shown above)joined the U.S. streetcar ranks, putting to rest any insistence that U.S. streetcar growth is a fluke. And as 2014 comes to a close, expect to add Washington, D.C., and Atlanta to the growing U.S. streetcar list.

Those developments account for systems already built and opened for service (or nearly so). The lists for both streetcar and LRT projects actively under construction, and under serious consideration, are longer still.

No one can say the rail suppliers aren’t ready for the wave of urban rail transit now appearing. Companies large and small exhibiting at the APTA Expo 2011 in New Orleans clearly indicated their awareness of, and eagerness to serve, an emerging market with big growth potential.

That includes heavyweight carbuilders like Siemens Mobility and Bombardier Transportation clearly marketing their ability to supply both LRT and streetcar products. Siemens touted its flexible approach to manufacturing its S70 car for LRT or streetcar application, an approach now in full flower on the property at Utah Transit Administration.

“The Sugar House line is an excellent example showing what streetcars can do in American cities,” says Siemens Rail Systems President Michael Cahill. “The economic development spurred by such lines is and will be considerable. When you have streetcars, you have on and off traffic; you have pedestrianism, and you attract bars and restaurants, which create a vibrancy in a city.” Cahill quips, “Bars and restaurants follow people.”

Bombardier, for its part, can point to Toronto as an example of supplying Flexity Freedom 100% low-floor streetcars for Toronto Transit Commission’s legacy lines, while Flexity LRT variants are destined for newer LRT lines in the Greater Toronto area.

Complicating matters, at least for streetcar sales, are rising demands for options to traditional cars powered by overhead wire, as municipalities take an increasingly greater proactive role, and sometimes fiscal stake, in determining their needs. (See sidebar above.) Various dual-powered vehicle specification have flooded the marketplace, with cities such as Washington, D.C., and Fort Lauderdale, Fla., making it a priority consideration. Dallas’ Oak Cliff neighborhood already has established the U.S. precedent, as it awaits four modern dual-power Liberty streetcars from Brookville Equipment Corp., due to begin revenue service next year.

Not that the customers automatically see the differences when it comes to rail submodes or modal power. Jason Kuehn, associate partner, vice present, transportation practice, for consultant Oliver Wyman, Inc., notes pointedly, “I don’t think most people would notice.” What riders do care about, he says, is the permanence of an LRT or streetcar route compared with buses. “If an area is unfamiliar, most people will opt for a fixed right-of-way, one they can see. Buses don’t offer that,” he says.

Siemens’ Cahill agrees. “The difference in passengers’ perception between a bus line and a streetcar line is the permanence; a bus could get redirected.” And it’s not just potential passengers who care, he points out. “A bus line doesn’t give business the confidence it might want. Fixed stations and fixed guideways do just that.”

Touting such advantages, suppliers are ready to market both streetcars and LRT, and the Federal Transit Administration seems more willing to help them do so than in years past. Still somewhat lagging, though, is FTA’s ability to communicate directly with a new crop of end-users: municipal and county authorities prodding traditional transit authorities and agencies (and sometimes avoiding those entities altogether).

At APTA Expo 2011, top FTA officials exhorted attendees to seek FTA’s guidance in advancing a burgeoning number of potential streetcar projects, with FTA reps presuming that transit agencies were the specific audience—a presumption somewhat inaccurate at best even in 2011, but one that at least one FTA representative still held at an APTA 2014 Rail Conference streetcar roundtable discussion in Montreal last June.

Several roundtable participants at that Montreal session, including Kansas City’s top transportation official, politely but pointedly noted such was not the case. Though Utah Transit Authority and Seattle’s Sound Transit are active streetcar proponents, others such as DART and Portland’s Tri-Met appear more comfortable in a supportive role (DART as an operator, Portland as a cooperative partner). Still other operators, roundtable panelists informed the FTA, were disinterested or even downright hostile toward streetcars—including even some with successful light rail transit divisions.

That makes it mandatory for municipalities, or sometimes counties, to “learn to speak FTA,” the Kansas City spokesman observed, even as it behooves FTA to alter or expand its communications efforts to a “new” clientele—municipalities and/or counties.

For federal officials and suppliers alike, that clientele appears likely to grow in the years ahead.

“To state the obvious: Everything is political these days,” observes Oliver Wyman’s Jason Kuehn. “But we’re moving ahead; the [urban rail] area is growing by leaps and bounds. Activity is ongoing despite the pitfalls.”

Move over, Houston, Dallas, and Denver; Los Angeles is bound and determined to match, and maybe raise, the bar on light rail transit development—with some streetcar thrown in—and help demonstrate that while streetcars are the current craze, North American LRT expansion is doing just fine.

The City of Angels now has moved into Tier 2 U.S. status in terms of percentage of population using rail and rail transit, on par with showcase cities such as Portland, Ore. And LA plans to rely heavily on LRT to increase that percentage.

• Downtown Regional Connector: To open May 2021.

And while LACMTA also proceeds apace with two Bus Rapid Transit routes for the East San Fernando Valley Transit Corridors, Gov. Jerry Brown last month signed a bill revoking legislation passed in 1991 banning LRT (described as “above-ground rail transit”) from being built in the valley. Los Angeles thus is cleared to convert its Orange Line Bus Rapid Transit (BRT) line to a light rail transit (LRT) operation in the future, though LACMTA has no funds in place for such a modal shift—county Measure R funds are largely spoken for.

Not that LA’s streetcar potential is being ignored. The City Council is supporting plans for a four-mile streetcar route (possibly including wireless operation) linking the Civic Center and the Convention Center (and, therefore, LRT), funded in part by Measure R funds and by a neighborhood property tax. LACMTA, along with the city’s Department of Transportation, have been authorized to seek federal funding for the project.

Federal funding: Is it essential? Municipalities weigh their options

Last month, streetcar proponents in Arlington County, Va., scored a victory when the state of Virginia pledged to fund roughly half the cost of the Columbia Pike streetcar, stretching along its namesake roadway in Arlington and Fairfax counties. The move could expedite the project’s construction—and avoid the angst of striving to secure federal funding for the project.

Such a development hardly is the first such instance; indeed, the initial San Diego Trolley Blue Line to San Ysidro, the first modern U.S. light rail transit operation, was put in place in 1981 without federal funding. At various times, the powers in Portland, Ore., have stated (or bluffed, or even threatened) to proceed with various LRT or streetcar growth whether federal funding was in place or not. Even New Jersey, hardly an LRT leader, eschewed federal funding in establishing its 34-mile RiverLINE in 2004 linking Trenton and Camden, N.J., though the line is a diesel light rail transit (DLRT) service, not electrified LRT.

Such assistance no doubt has accelerated U.S. LRT and streetcar expansion signficantly, particularly since the Federal Transit Administration has overseen its New Starts and Small Starts program in recent years with a friendlier disposition toward rail-related transit.

But at least two drawbacks can counter such benefits.

One is simple economics: Demand for federal funding assistance for LRT and streetcars far outstrips supply, as numerous municipalities have found for years when competing for successive rounds of Transportation Investment Generating Economic Recovery (TIGER) grants (not only with each other’s rail project, but with numerous bus and Bus Rapid Transit proposals in the mix).

The cost of time is the second obstacle. As Arlington County officials suggested (or sometimes state outright), the amount of time required to satisfy federal regulations and recommendations not only frustrates supporters; it encourages anti-rail partisans to keep sniping at a given project—as one Texas rail advocate puts it, “in hopes of spreading fear, uncertainty, and doubt”—and at least indirectly causing project costs to rise as delays mount, even if the project survives.

The choice may become more stark, and more immediate, if Congress fails to reauthorize a surface transportation funding program by the end of this month. Rail transit, indeed all public transit, remains a small portion of any highway-heavy legislation, thus relegating rail projects to the status of lesser hostage. More U.S. locations, be they city, county, and/or state, may decide to proceed without federal aid.