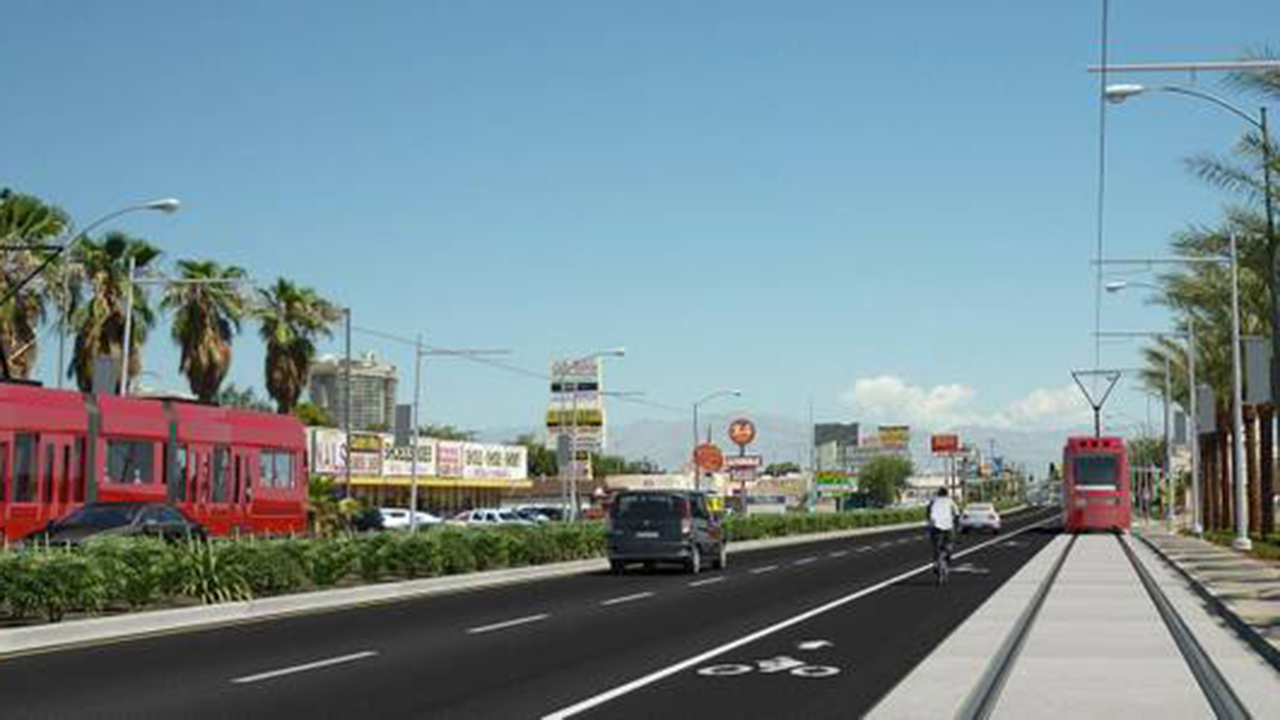 A proposal to build an urban light rail or bus rapid transit system on Maryland Parkway between McCarran International Airport and downtown Las Vegas was scrapped a few years ago in favor of BRT. This image from the Regional Transportation Commission of Southern Nevada shows a version of the proposal that involved running LRTR down both sides of the street.

Las Vegas is connected to one of the hottest rail topics over the past year, a high-speed line connecting the gambler’s paradise with Los Angeles, but the city knows it also needs to take care of its own.

Charleston Boulevard could receive a mass transit system if everything falls into place. Axios Nevada LLC and the city of Las Vegas have reached an exclusive agreement on the construction of a high-capacity transit system that could cost as much as $3 billion. The line would be privately owned and operated.

Light rail, a solar-powered mass transit system and a tunnel system built by Elon Musk’s Boring Company are some of the options being discussed, but light rail appears to be the leading candidate, at a project cost of around $3 billion. The LRT route would run along Charleston Boulevard, starting near Hollywood Boulevard and ending near Town Center Drive in Summerlin. The line, which would be 19 miles long, would move through downtown Las Vegas.

Regional Transportation Commission of Southern Nevada officials considered a similar system along the Maryland Parkway a couple of years ago, but decided to go with a BRT (bus rapid transit) system to cover the 8.7 miles because the cost for LRT was too high. Charleston Boulevard is already served by bus, so it will most likely turn into a shared transit service corridor.

During the next year, Axios is required to show ridership and revenue forecasts, a preliminary route plan, the possible location of a maintenance yard and how land for the yard will be acquired. A final design along with construction and operation plans needs to be presented to the city by the end of year two.