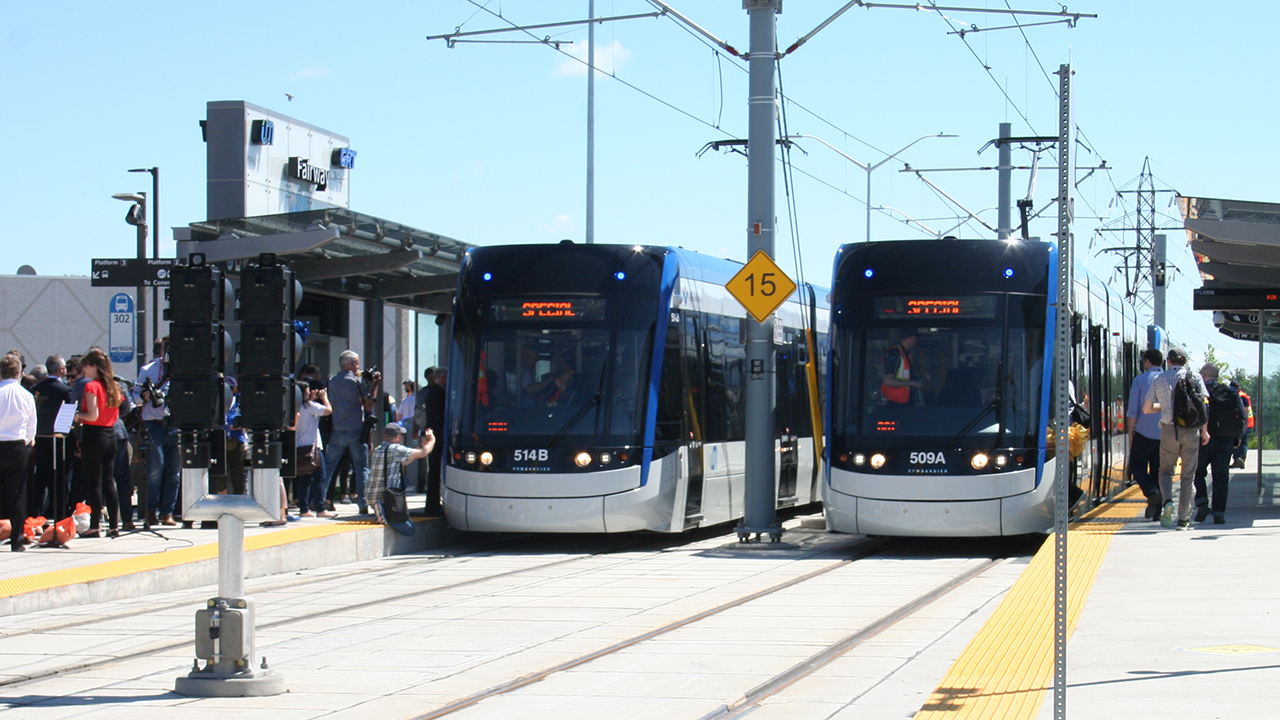 All photos by John Thompson.

Ontario’s first new LRT line began public operation on Friday, June 21, 2019, in the twin cities of Kitchener and Waterloo. K-W, as it is known locally, is about 60 miles northwest of Toronto, on CN’s Toronto-London secondary line. The LRT operates under the brand name of ION.

Opening ceremonies were held at Fairway Station, the southern terminus, located in the parking lot of Fairview Park Mall in southern Kitchener. The weather was superb, warm and sunny, with a delightful breeze. 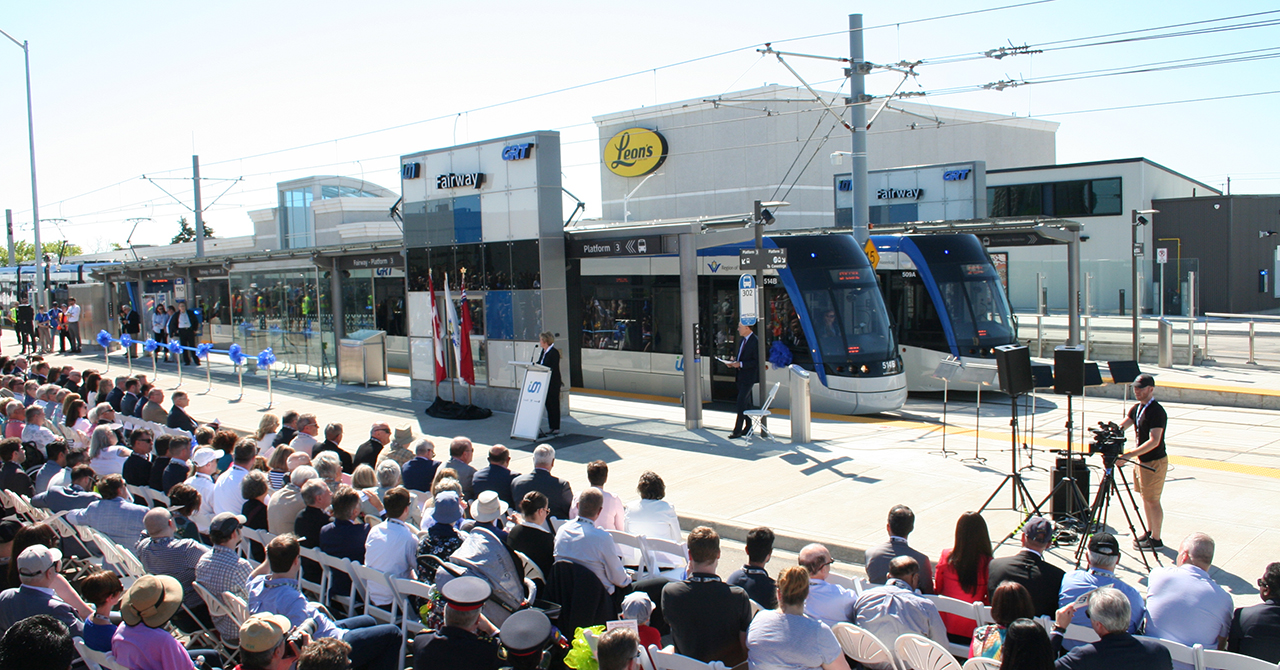 Thousands of area residents began assembling early in the day for this historic moment in their cities’ history. Drawn up in the station were several gleaming Bombardier Flexity Freedom five-section LRVs, resplendent in the attractive blue-white-black livery of Grand River Transit, the local bus operator. 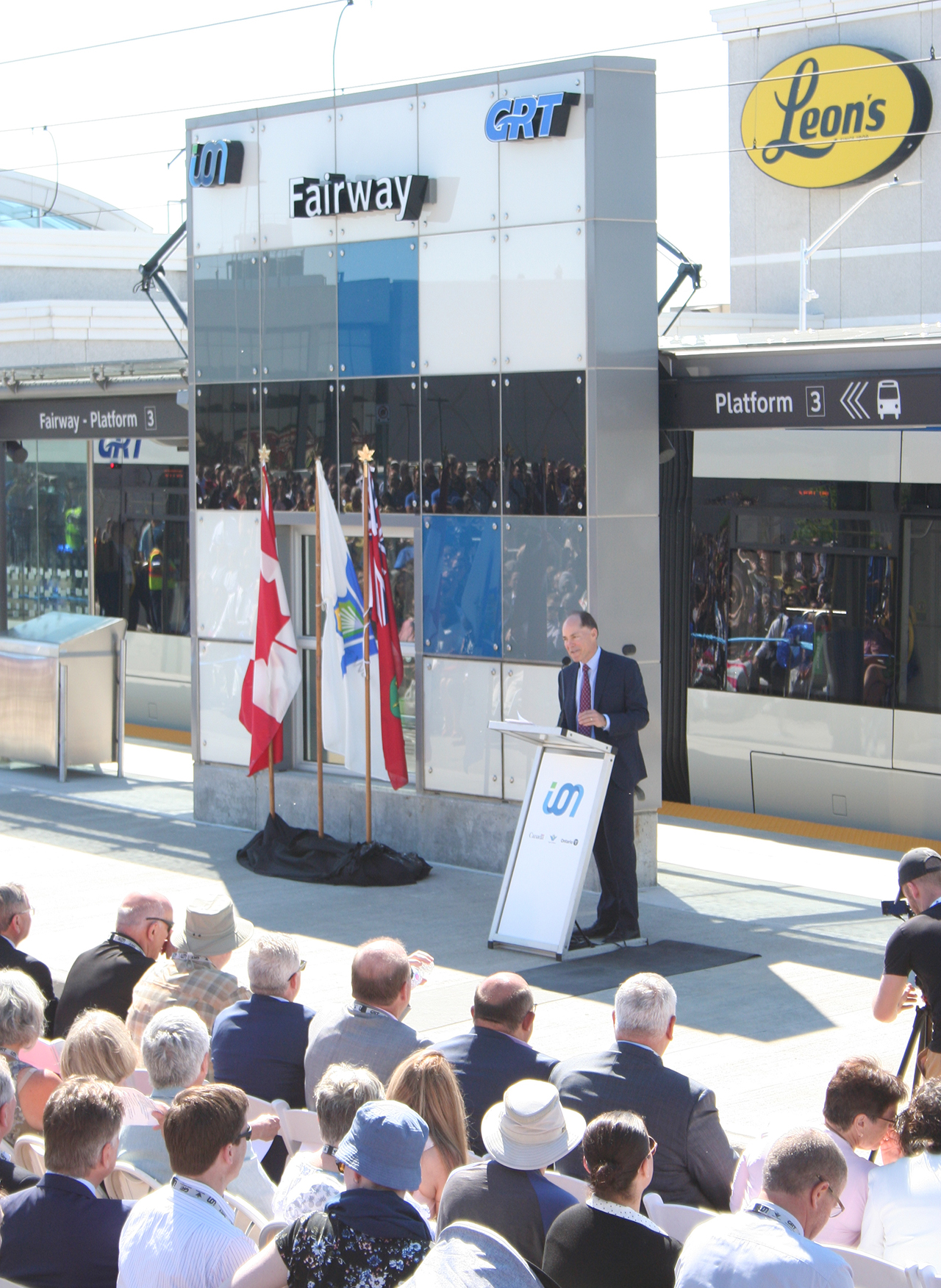 Representatives of the three levels of government were present, and manufacturers and other organizations, offering the speeches common to such occasions. The guests included officials from other transit systems, including the Toronto Transit Commission and OC Transpo. Hamilton Mayor Fred Eisenberger, a strong supporter of his city’s LRT project, was on hand for the festivities and first ride. 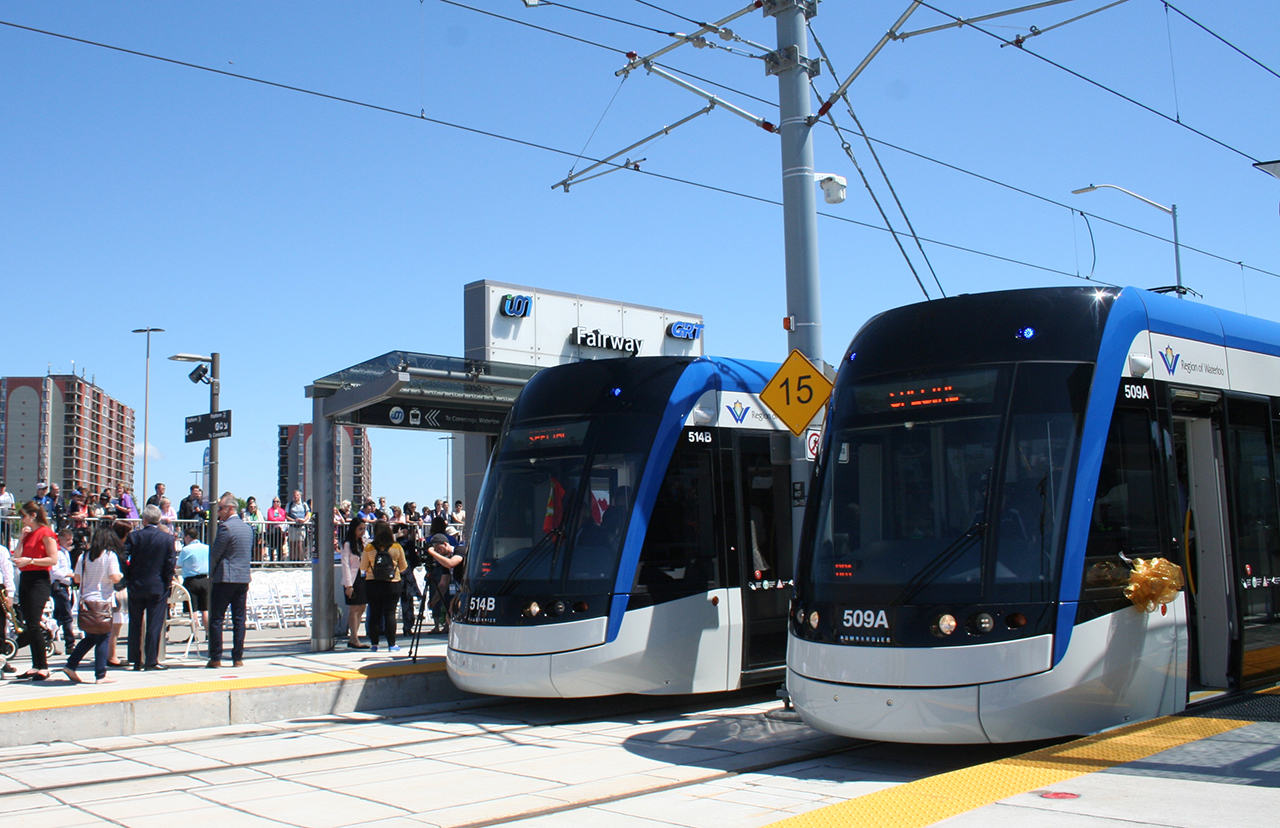 The Kitchener-Waterloo people may have felt a sense of pride that their LRT would go into the history books as Ontario’s first, beating out the problem-plagued Ottawa project. 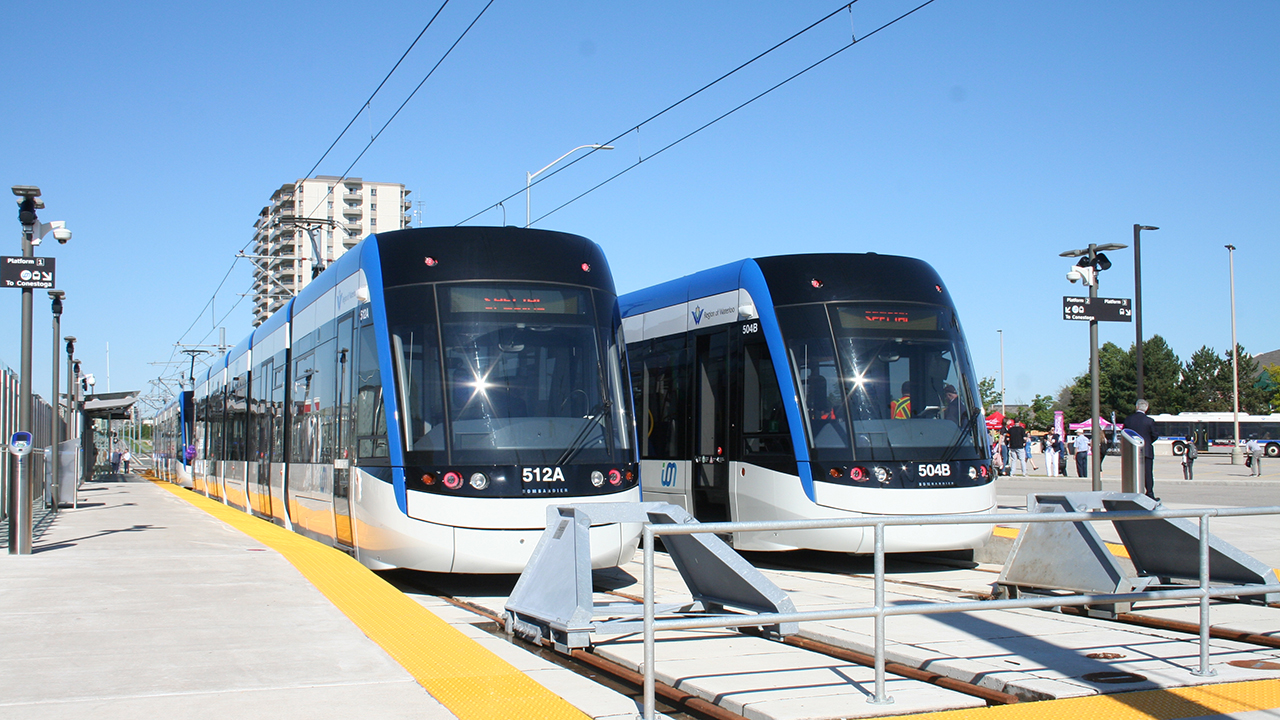 The ION opening represented the return of electric rail transit to K-W, absent since the December 1946 abandonment of the city’s streetcar line. The LRVs not only follow part of the old streetcar route along King Street, but also the Canadian Pacific’s Grand River Railway interurban line, down Caroline Street, Waterloo. What goes around … or as one of the onlookers remarked, “These days, the rails are going down, and the overhead’s going up, instead of vice-versa!”

At 11:40 AM the first LRV departed Fairway Station with the public aboard, and the LRT era had begun in Kitchener-Waterloo. Free rides were offered, not only on the LRT, but the local buses as well, until July 2. It was likely the first “streetcar” taken by most of the people. An estimated crowd of 21,500 people boarded the big Flexities between noon and 8 PM on June 21, with a total of 73,000 by Sunday evening. 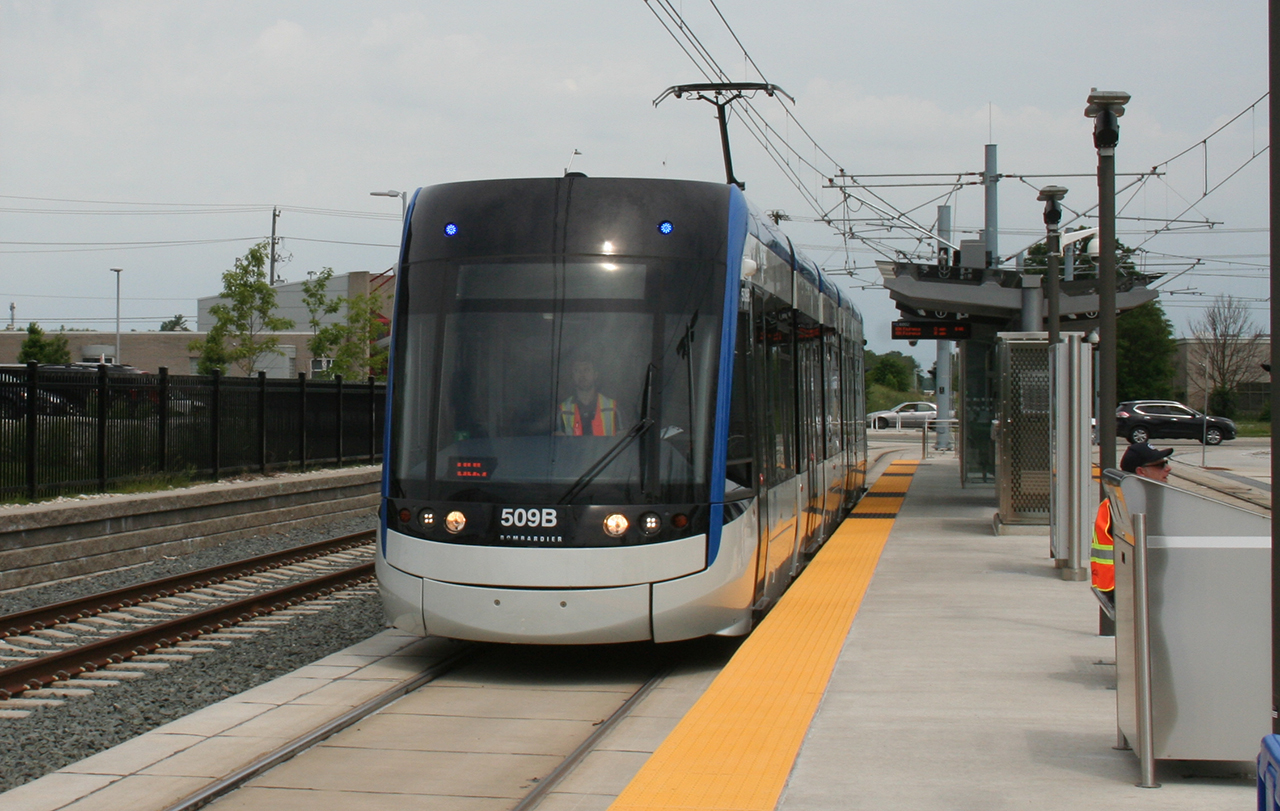 The free rides were, in effect, a gift to the local residents from Waterloo Region for their patience while the project suffered delays from construction problems and late vehicle deliveries. The opening came 10 years after approval by Region Council, follow five years of intense study. The first trains were originally hoped to be rolling by late 2017.

The total estimated cost of the LRT was C$818 million. However, in December 2017, overruns were expected to reach $50 million. The Ontario government was expected to cover $25 million of that amount; the Region may seek compensation from the vehicle supplier.

That said, the Region estimates that approximately $2 billion in new development projects may be credited to the LRT’s presence. It is expected that almost 17,000 new jobs will be created near ION stations. 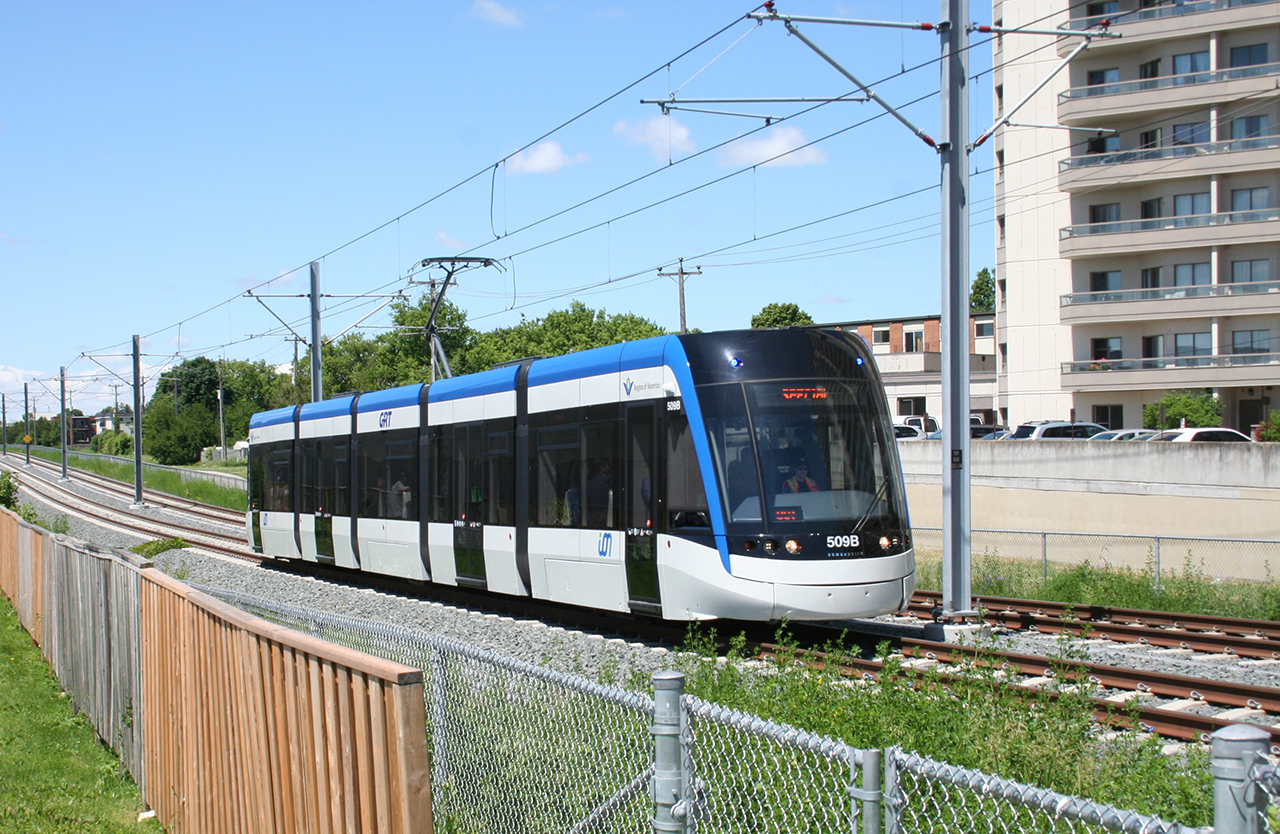 The LRT is laid with 115-pound “T” rail, with guard rails at curves. The street trackage is laid on steel crossties ties that rest on a concrete track slab; the ties and rails are surrounded by poured concrete. On the open track sections, the rails are affixed with Pandrol clips to concrete ties resting on deep crushed-rock ballast. Scissors crossovers are provided at the terminals, while single crossovers are installed at other strategic locations. Grade crossings are protected by standard lights, bells and gates. The LRVs have priority from traffic signals at intersections. 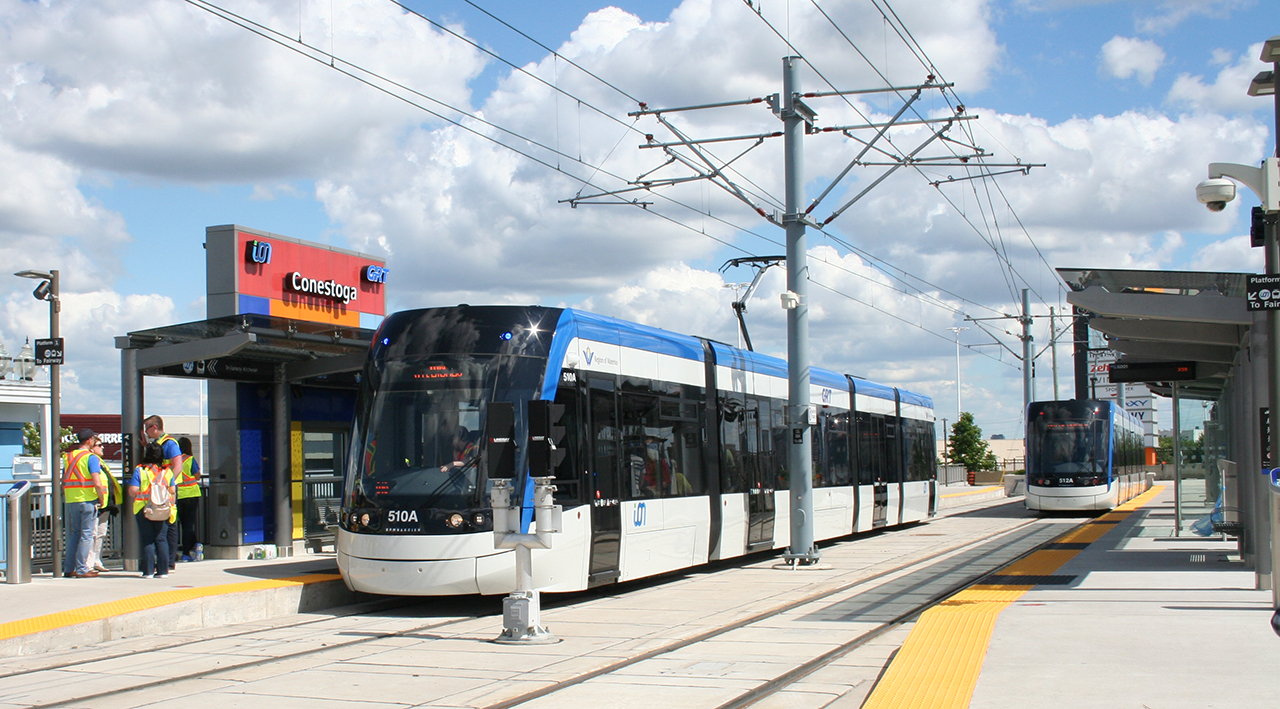 The overhead catenary is of Siemens design and manufacture. Traction power is provided at 750 volts DC, from closely spaced substations.

Two small bridges across local streams had to be built. No other major civil works projects were necessary, apart from the shop complex. The new underpasses beneath Provincial Highway 85 and King Street were financed from other sources. 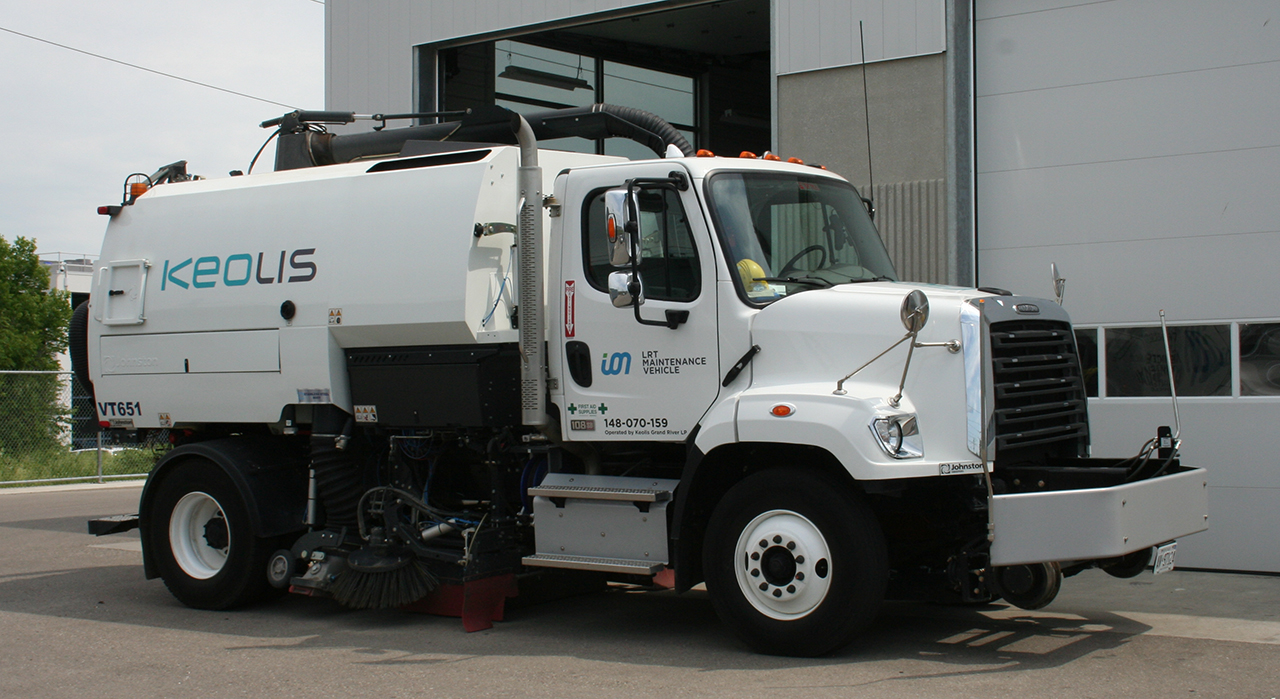 Service is provided by 14 double-ended Bombardier Flexity Freedom LRVs, assembled at the Thunder Bay plant (the first car) and the Millhaven, Ontario plant (the balance). They were delivered by rail to the Waterloo-located Operations Maintenance Storage Facility (OMSF). The facility is located beside the LRT line, on former industrial land in north Waterloo. It features a fully equipped shop. 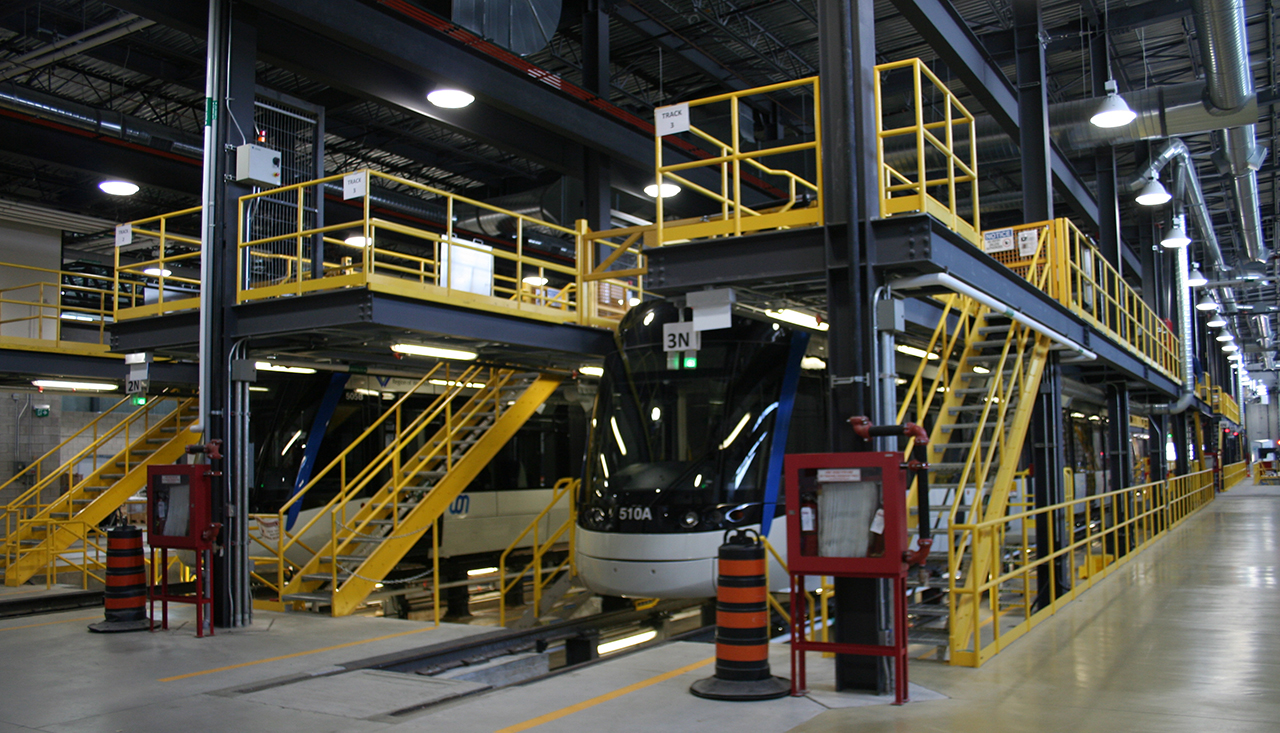 The LRVs were an add-on to a Metrolinx order for cars for its Eglinton Crosstown line in Toronto. The Crosstown LRVs are similar; the main difference for the Toronto cars is a single cab, as they will operate as two-unit married pairs. 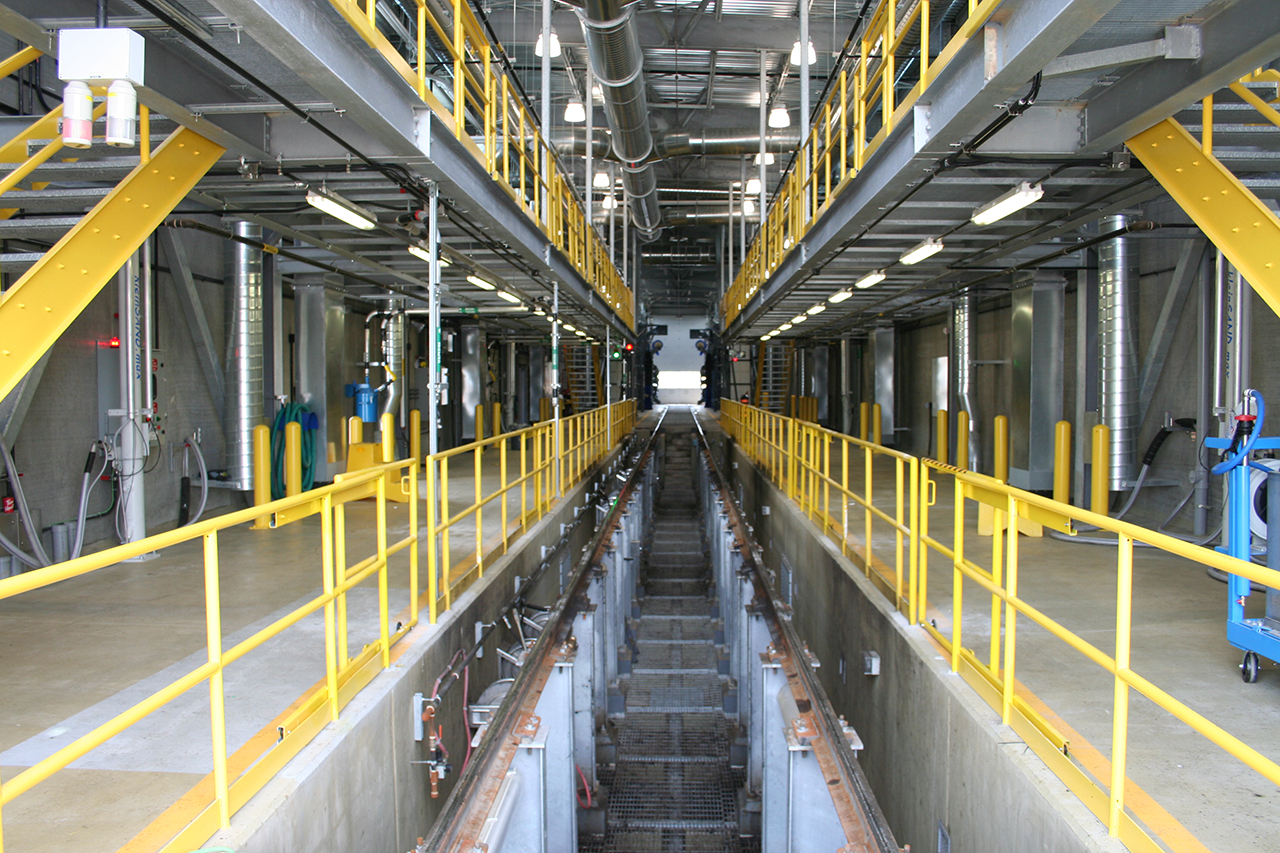 The K-W LRVs are estimated to cost an average of C$6.6. million per car. They have 56 seats, with a standing capacity of 144 passengers. The final LRVs were delivered in December 2018, two years behind schedule. 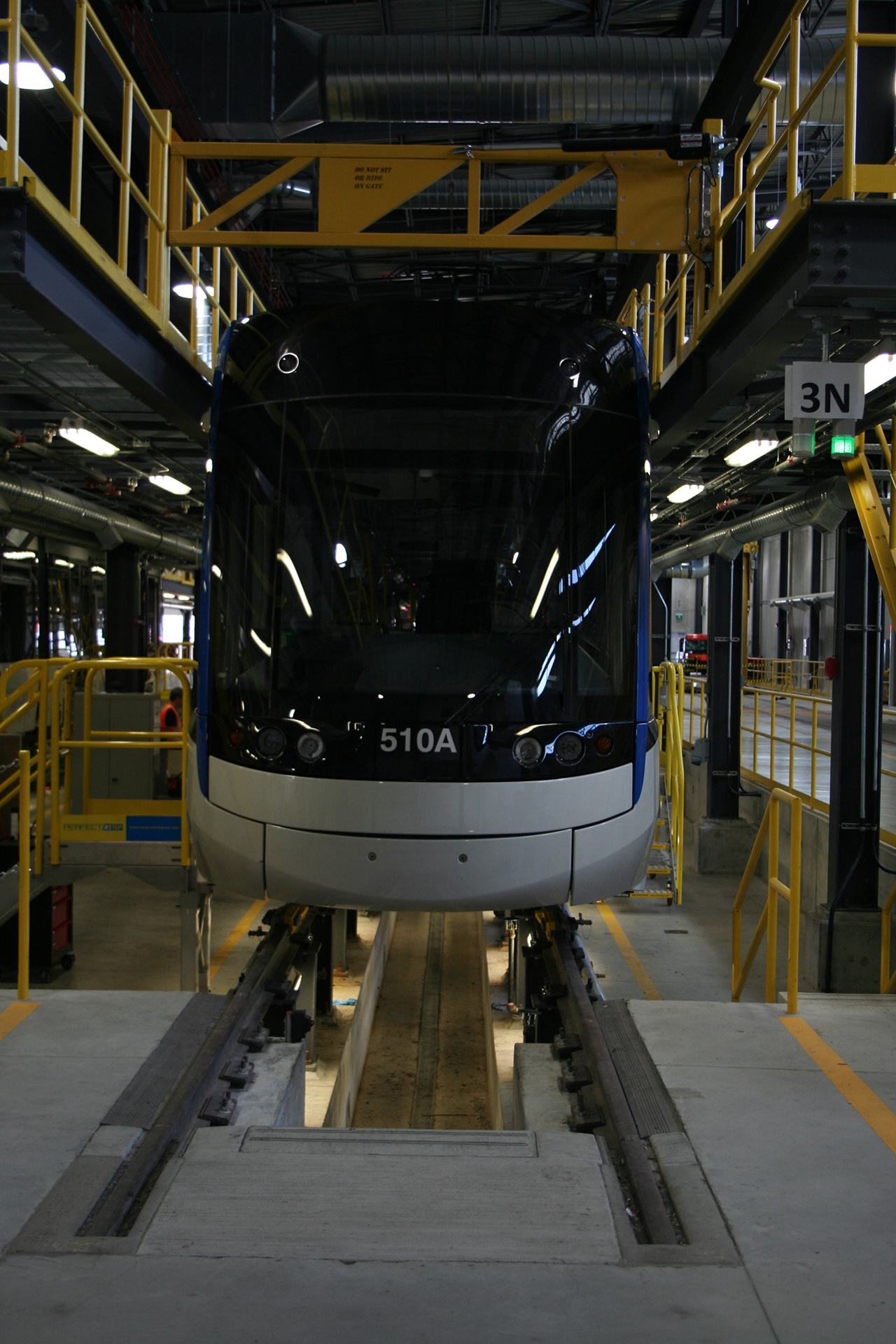 Over the course of its route the LRT, in addition to the two shopping malls, serves downtown Kitchener and Waterloo, several local schools and the University of Waterloo. Service is operated at present between 5 AM and 1 AM daily, with eight-minute rush hour headways and 10-minute intervals at other times. The trip is scheduled for an average running time of 45 minutes. 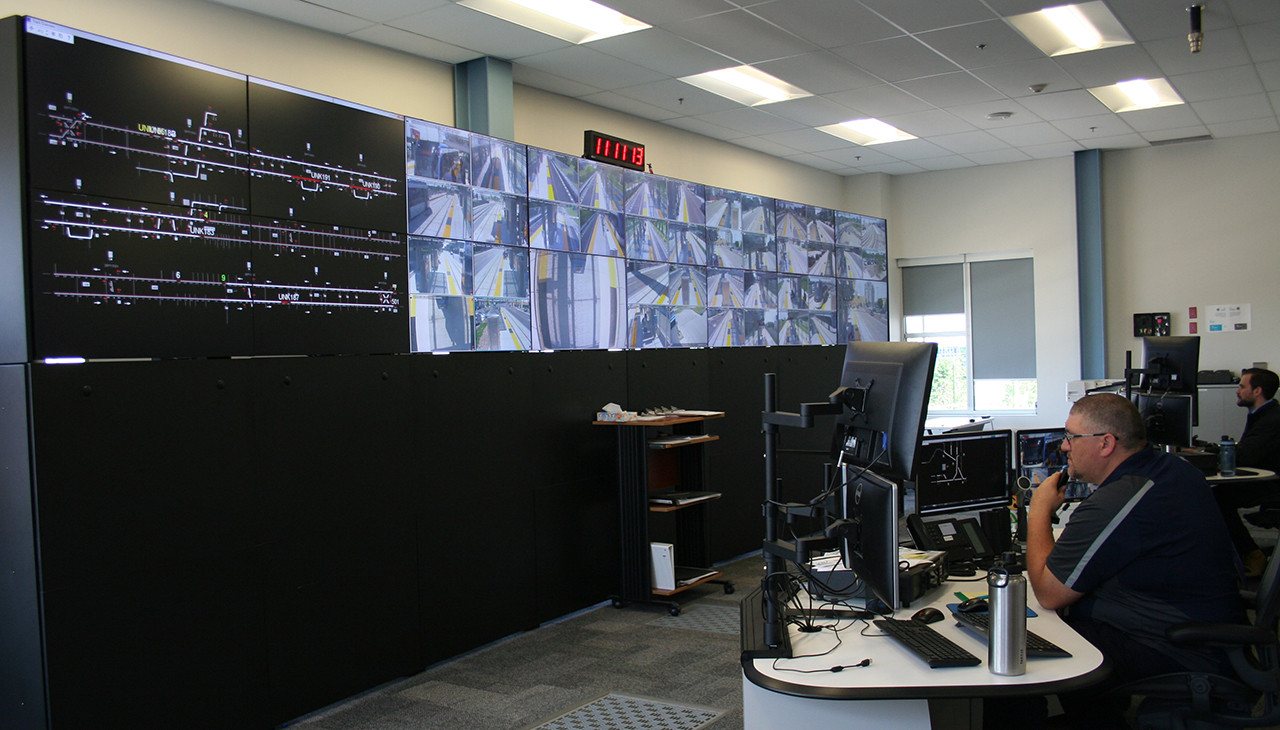 The three-mile section of line between Waterloo Square and Northfield Drive is shared with CN local freights, usually outside of LRT operating periods via temporal separation. The freight movements serve a chemical plant in the town of Elmira, about 10 miles to the north. They operate over the southbound LRT track in the common section; this trackage was built to main line railway tie spacing. Gauntlet trackage at three stations is provided so that freights will safely clear the LRT platforms. 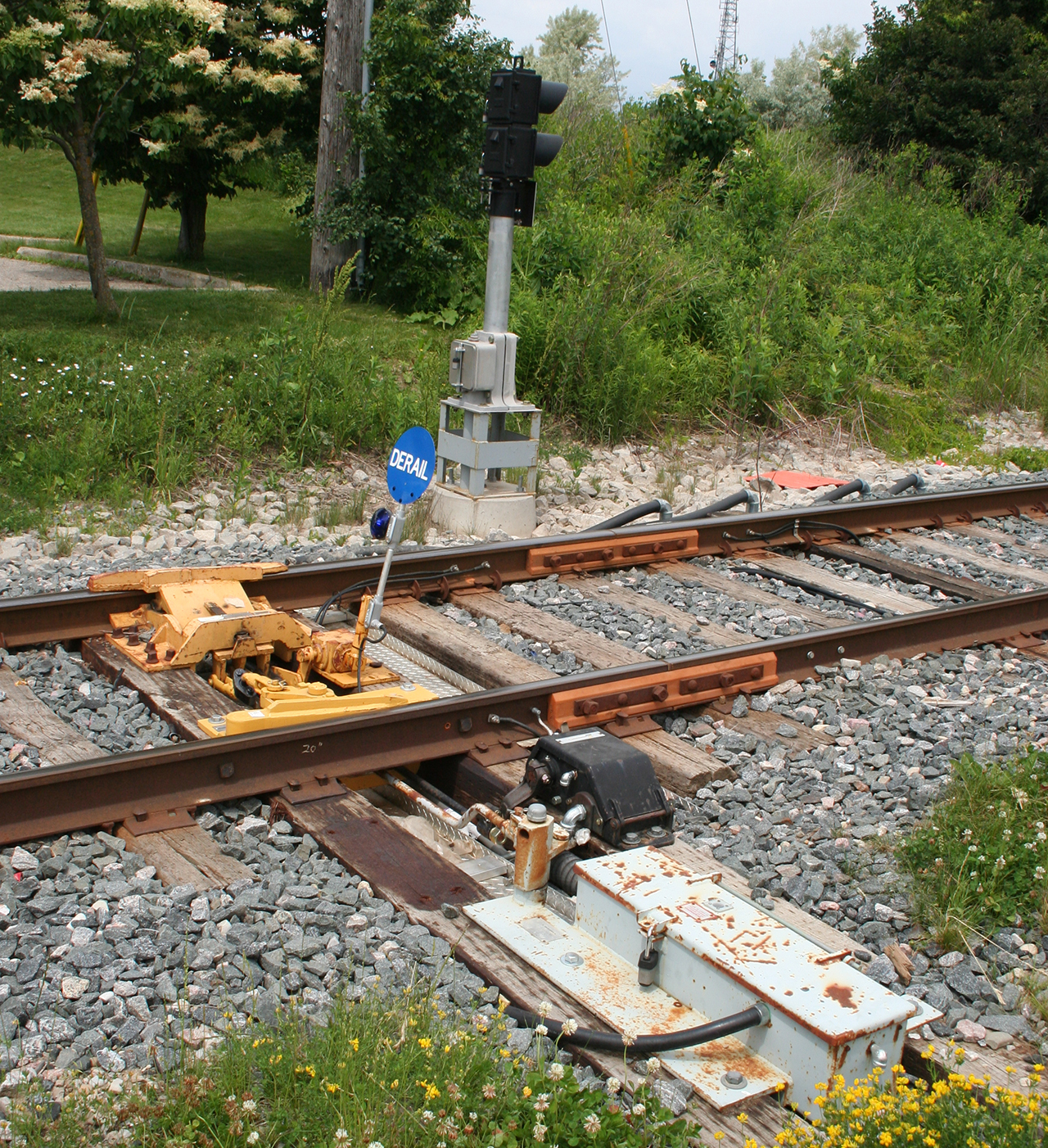 The K-W LRT was built under a 30-year P3 agreement with an overall contractor, Grandlinq. The subcontractors included Plenary Group, Meridian Infrastructure, Aecon, Kiewit and Keolis, the latter being the operating and maintenance contractor. The Waterloo Region owns the system, including all infrastructure and vehicles; sets fares and service levels; collects fares; and provides customer service. The Region expects that the LRT will contribute to a compact form of urban development that is more economical to serve than traditional detached houses, and should help to preserve local farmland. 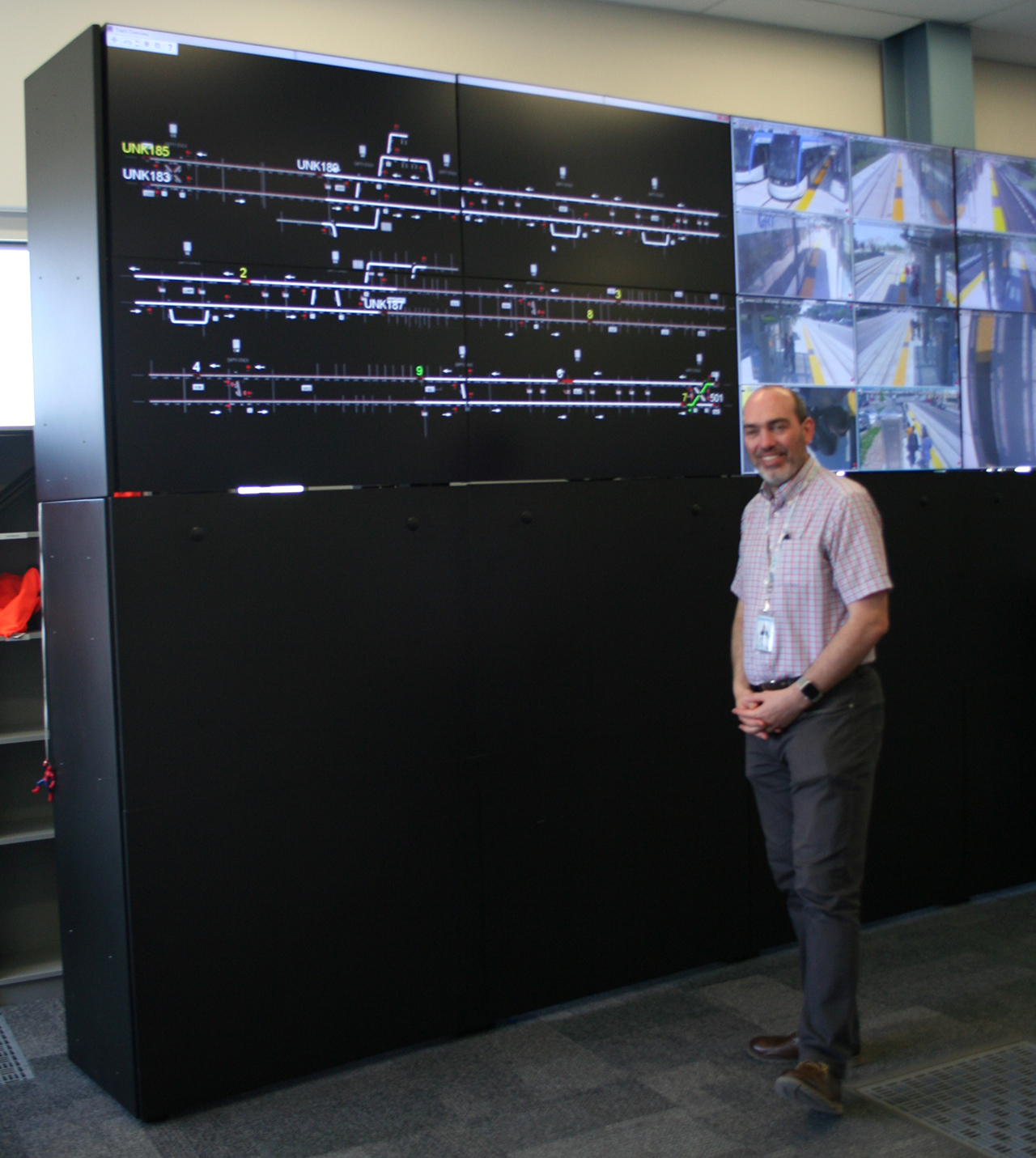 On June 28, 2019, one week after the LRT at Kitchener-Waterloo (Ontario) began public service, this correspondent met with Ian Cushion, General Manager, and Gurjeet Kaur, Communication Specialist, Keolis Grand River LP, at the Waterloo headquarters that serves as the Operations, Maintenance and Storage Facility for ION LRT.

The past week had been quite busy, as local residents turned out in huge numbers to ride the LRT. Keolis, an international company based in France, has a 30-year maintenance and minimum 10-year operations contract for the LRT. The overall contractor is GrandLinq, under a P3 DBFOM (design-build-finance-operate-maintain) agreement.

The P3 procurement method has become common for LRT projects in Ontario, being applied to the Eglinton Crosstown (Toronto), Finch West (Toronto), Hamilton, Mississauga and Ottawa undertakings. In Toronto and Ottawa though, the trains will be operated by the respective city agencies Toronto Transit Commission (TTC) and OC Transpo.

P3 offers numerous advantages, as it relieves cities and regions from the sometimes-onerous construction process, as well as hiring and training operating and maintenance employees for a rail system, for which they may lack the necessary experience. The exception, of course, is Toronto, where the TTC has been an exemplary rail operator since Day One (Sept. 1, 1921).

Ian Cushion explained that all the ION LRT operations and maintenance staff are employed directly by Keolis or their infrastructure partner, RailTerm, including several former TTC staffers. Bombardier staff remain in the building to perform LRV retrofits and other warranty-related work.

The nerve center of the LRT operation is the two storey administration, operations  and vehicle maintenance shop, located beside the main line in North Waterloo.

A control room, staffed 24/7, is situated on the second floor. Here, a display board tracks the location of all LRVs, while a bank of closed-circuit TV monitors allows controllers to observe station platforms continuously, for example, should passengers require assistance.

LRV movements are tracked by an INIT GPS for the on-street sections of line, and by wayside track circuits (Alstom-supplied signaling) on open track private right-of-way. Operators have routing control in the field via a Track-Wayside Communication system (Hanning and Kahl-Geman-supplied), with the control room able to also set routes remotely via the AIM Rail system (from Collins Aerospace).

The maintenance equipment in use includes a Talgo wheel turning lathe, vehicle hoists and a wash plant for exterior and interior car cleaning. Elevated walkways, as well as pits, are provided for maintenance access.

At present, 10 of the 14 LRVs are assigned to scheduled service, with two spares. There is space in the yard for additional trackage that could increase capacity to 30 LRVs. This increase would be in the future, depending on patronage levels.

Station and on-board security, as well as fare checking, are provided by Grand River Transit staff. Medical and police services are contacted when necessary by Keolis controllers. Public address announcements at stations may also be made from the control room.

A CN radio is in the control room for contact with the railway when a freight train movement along the three-mile shared track is imminent. The Keolis controller sets up the routing and releases the derails, to permit passage of the CN train. A high and wide/dragging equipment detector provides an additional security measure.

There is a proposal to ultimately extend the existing LRT southward from Fairway Station to the adjoining city of Cambridge, involving about 10 miles of trackage. However, a 2017 report states that a construction start is unlikely before 2025, due to projected ridership and financing issues. It would be more expensive to build, inflation notwithstanding, due to the need for costly civil works (an elevated section, and railway grade separations). 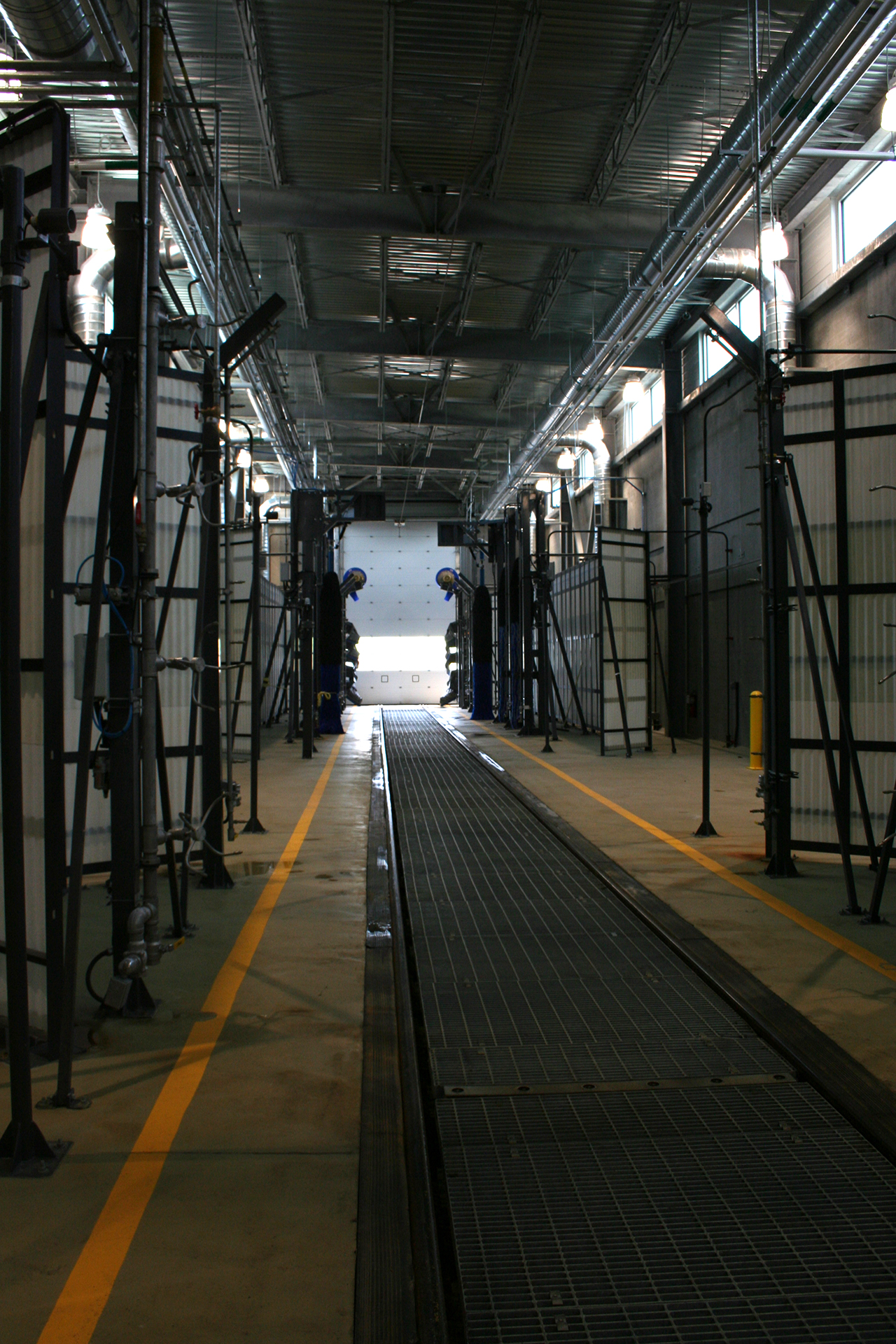 In the meantime, though, the thriving cities of Kitchener-Waterloo will be enjoying smooth, clean, quiet electric rail transit. 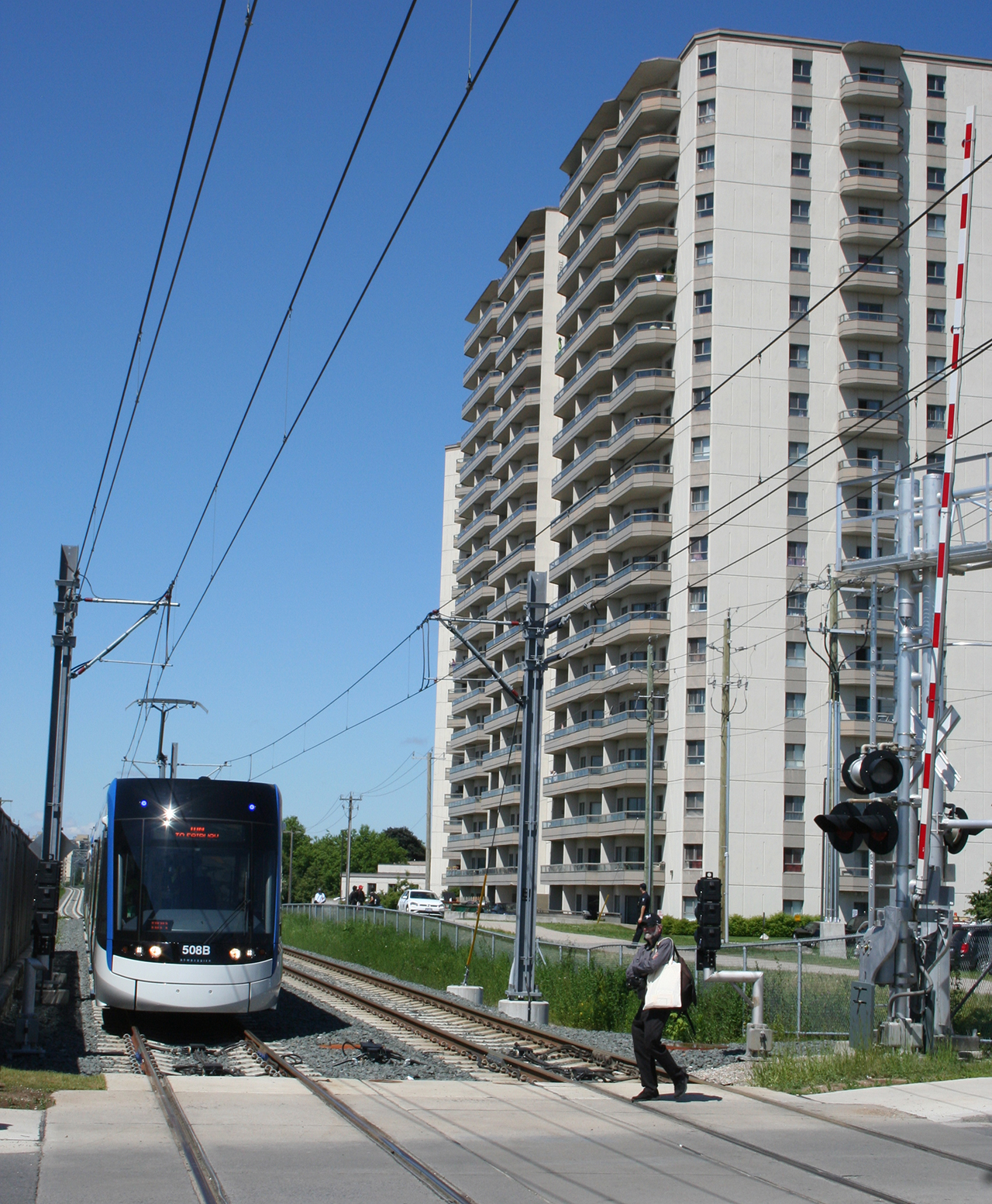