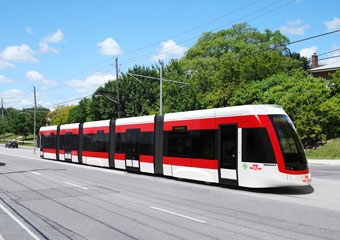 With an increasing number of cities constructing light rail networks in response to growing urbanization, and aging fleets up for renewal, the market for LRVs is expected to grow at 4% per year over the next five years, according to the latest market study by German consulting firm SCI Verkehr.

The regions contributing most to this growth are North America, Asia, Africa and the Middle East, where many cities do not have light rail systems and where the construction cost of rapid transit networks is deemed too expensive, with the U.S. and China in particular experiencing high growth.

SCI Verkehr expects that around 1,800 miles of new lines will open up to 2020 compared with 2014, and a further 600 miles by 2024. The replacement of aging fleets rather than new line construction is expected to sustain growth in Europe and the Commonwealth of Independent States (CIS). The current market volume for new vehicles is $2.9 billion per year and around $3.4 billion for after-sales service. The European market is expected to grow by less than 2% per year, while impressive growth rates of 7% to 17% are expected in North America, Asia, Africa/Middle East and the CIS up to 2019.

Bombardier, Alstom and Siemens continue to lead the supply market. However, their cumulative market share has fallen to 44% in 2010-2014 compared with more than 60% from 2000 to 2007 as medium-sized and local companies pick up more and more orders. In particular, CRRC has secured significant market share due to orders from its domestic Chinese market, while Pesa and CAF have won notable international contracts.

SCI Verkehr describes itself as “an independent consultancy company for the transportation sector with activities around the world. We specialize in strategic advice to the railway and logistics industry. In addition we have an international, professional network of experts.”