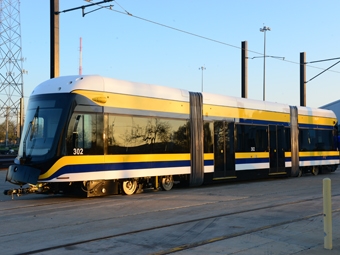 “When the Dallas-Oak Cliff Streetcar opens for business on April 13, it will be operating a brand new, first-of-its-kind vehicle carrying passengers from downtown Dallas to north Oak Cliff,” says Dallas Area Rapid Transit (DART) spokesman Morgan Lyons. “The vehicle, which was designed and built by Brookville Equipment Corp., will be the first streetcar in the United States that utilizes wireless traction power. This means the vehicle will be powered by catenary on surface streets, but operate with an on-board ESS (Energy Storage System) as it crosses the historic, 101-year-old Houston Street Viaduct.”

The ESS, as described by Brookville, is a special feature of its partial-low-floor Liberty Modern Streetcar built for DART. It’s a redundant lithium ion battery system charged through the overhead catenary system (OCS) that provides power while the vehicle is crossing the one-mile Houston Street Viaduct. An integrated battery management system (BMS) monitors the current charge state of the ESS “to ensure successful runs on the line,” says Brookville. “The battery ESS is ideal for longer off-wire runs, due to its ability to store high power loads and its low discharge rate.”

The project is a partnership of DART, the City of Dallas, the Federal Transit Administration, and the North Central Texas Council of Governments. The streetcar starter line runs 1.6 miles from Dallas Union Station to Oak Cliff.

Other than testing and operator training along the new corridor, the vehicle (and its twin, scheduled to arrive shortly) will make its next appearance on April 9 as part of DART’s participation in APTA’s Stand Up 4 Transportation Day, which focuses on national transportation infrastructure advocacy.