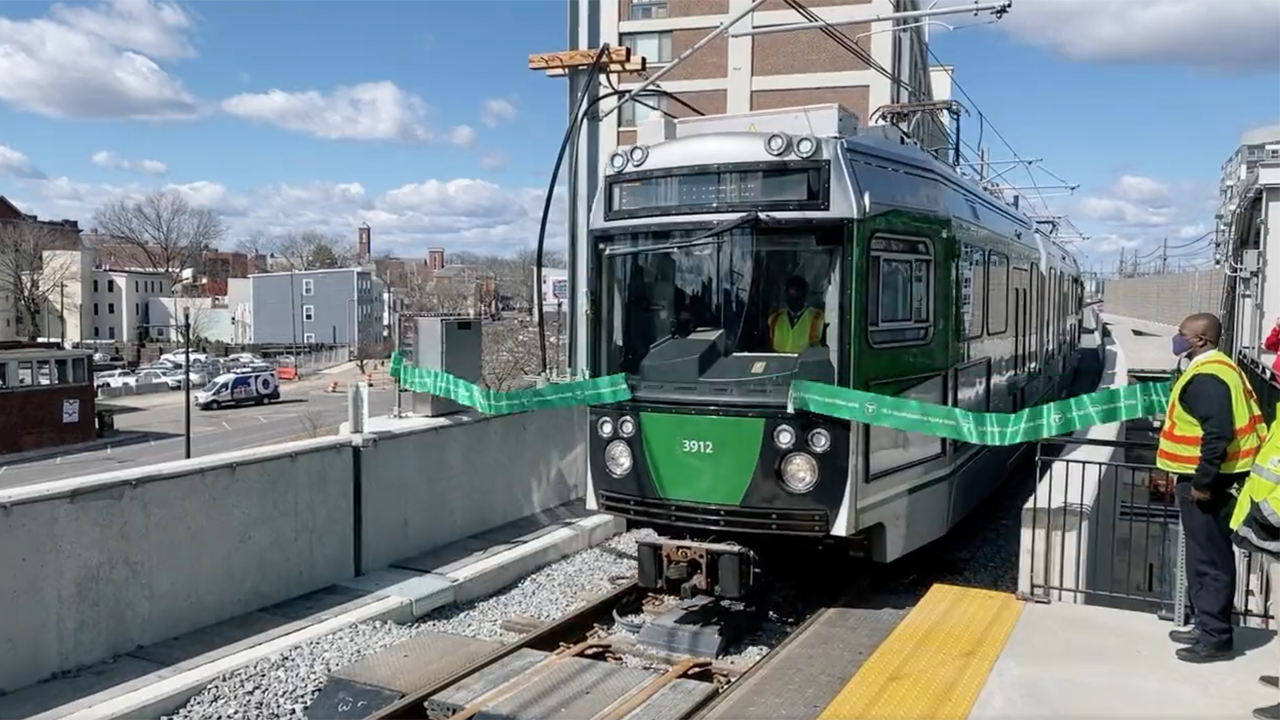 “This is how we cut ribbons at the T. With a ceremonial trolley ribbon breaking, the new Lechmere Station & entire Union Branch of the #GreenLineExtension is now open! Serving Cambridge & Somerville, this #BuildingABetterT project provides new access to reliable public transit.” —MBTA, via Twitter on March 21, 12:02 p.m. EDT.

Phase 2 to Medford, Mass., near Tufts University, is slated to open this summer with five new T stations. It will operate approximately 3.7 miles parallel to the MBTA Lowell Commuter Rail Line. See map below.

“The opening of the Union Square Branch of the Green Line today marks an incredible achievement for the MBTA and improved transit options for the riders we serve. It also symbolizes the culmination of many years of hard work on the project, even during times of uncertainty,” Poftak said. “I’d like to thank the Baker-Polito Administration for its continued guidance and support of GLX; our MassDOT partners for their continued leadership; our municipal partners for their eagerness and collaboration; GLX Program Manager John Dalton and the entire GLX team for their dedicated work in propelling this project forward and making this day a reality; the entire MBTA team for their support of this project; and the many stakeholders, advocates, GLX neighbors, and members of the community who have partnered with us and supported the project. This is a great day, and we look forward to officially opening Green Line service along GLX’s Medford Branch later this year.”

“The start of revenue service on the Union Square Branch today represents the collective, sustained efforts of many people for many years,” MBTA GLX Program Manager John Dalton said. “Advocates, elected officials, engineers, contractors, MBTA employees, [and] city and state employees have persisted to ensure the real beneficiaries of GLX—the riding public—will now have reliable, safe public rail service from Union Square Station in Somerville and soon from Medford/Tufts Station in Medford. As a member of the MBTA’s project delivery team, I want to specifically thank the dedicated professionals of the MBTA’s Program Management Team, the staff and work crews of GLX Constructors, and the residents and neighbors who have been impacted by the construction efforts associated with achieving this historic milestone.”

“The Green Line Extension is already transforming the region, creating so many opportunities for residents,” Nuria Fernandez said. “The Green Line was the first subway line in America. MBTA is still on the cutting edge, looking for new and better ways to improve access and change people’s lives. I am proud of FTA’s role as this project came to fruition—not only providing a nearly $1 billion Capital Investment Grant—but also our technical assistance throughout the process.”

The GLX project—part of MBTA’s five-year, $8 billion Building a Better T capital investment plan—broke ground in 2018 to extend service about 4.7 miles and provide a one-seat ride to downtown Boston, eliminating the need for bus and rail transfers.

“GLX was procured through a framework that set strict limitations on the project’s total cost while allowing bidders to include additive options ensuring the MBTA could procure a project that maximized the benefits without jeopardizing its budget,” according to the Governor’s Office. “In addition to track infrastructure and seven station stops, construction included six additive options: platform canopies, additional elevators at select stations, public art, an extension of the community path [from Somerville into Cambridge] with additional connections, and an enhanced vehicle [storage and] maintenance facility.”

The new elevated Lechmere station that opened March 21 is located on the viaduct on the north side of Monsignor O’Brien Highway. Featuring two headhouses—on North First Street and on East Street—the station includes a new busway with four bus shelters; storage for more than 250 bicycles; three elevators; and longer, covered station platforms to accommodate new Green Line railcars. (In 2018, MBTA started taking delivery of 24 low-floor light rail vehicles from CAF USA Inc., under a $118 million contract, for use along the Green Line and to support the new service extension.) The previous Lechmere station opened with the completion of the East Cambridge Viaduct in 1912 and has served as the terminus point of the Green Line since that time.

“It’s gratifying to see the impact this project will have on our communities,” STV Project Manager Keith MacKenzie said. “Designing a public transportation project like this increases vital access to the educational, medical and economic institutions that connect our communities.”

“Safe and reliable infrastructure is vitally important to local, state and regional commerce,” said Thomas Nilsson, President of Fluor’s Infrastructure business. “Boston is one of the most vibrant cities in the United States and when this project is fully completed, it will help to improve transportation access for residents and visitors of the greater Boston area.”

Upon completion, GLX crews will have installed 100,000 railroad ties, 21,000 linear feet (nearly four miles) of pilings, 22 million pounds of steel (which includes 16.5 million pounds of steel girders), and 17 miles of track, and built a two-mile multi-use community path. Additionally, Green Line trains will operate every five to six minutes during peak periods, with daily ridership at the seven GLX stations expected to hit 45,000 by 2030.