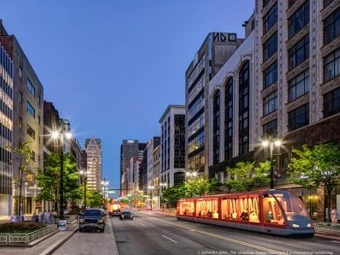 M-1 RAIL, the non-profit organization leading the DBOM (design-build-operate-maintain) for a 3.3-mile streetcar line along Detroit’s Woodward Avenue between Larned Street and West Grand Boulevard, has awarded a $30 million contract to Inekon Group for six vehicles.

M-1 RAIL will negotiate the final terms and conditions with Inekon Group to build the streetcars. “Inekon has a strong track record with other streetcar projects in Portland, Seattle, and Washington, D.C., and owns a 40% share of U.S.-installed projects,” said Chief Operating Officer Paul Childs. “While Inekon is headquartered in the Czech Republic, our requirements specify that it will be compliant with the U.S. Government’s Buy America initiative. We want to assure that materials, parts, labor, manufacturing processes, and final assembly will meet the Buy America requirements.”

Childs said that M-1 RAIL will announce a final assembly location in the future, but added that several locations in Southeast Michigan are under consideration. “It’s too early to talk about any sourcing or potential manufacturing locations, but we are committed to the principles of Buy America’s support of U.S.-based suppliers and the families who work for them,” he said.

M-1 RAIL’s streetcars also will be compliant with the Americans with Disabilities Act (ADA), allowing for station-level access for pedestrians, and persons who use mobility assist devices such as wheelchairs. Vertical bicycle racks will be included in the design to accommodate Detroit’s growing bicycle community, as well as Wi-Fi access for passengers, and HVAC systems to facilitate the swings in Michigan’s weather.

Each streetcar will be 73 feet long, 8.5 feet wide, and 13 feet high, with a vehicle weight of approximately 38 tons. The cars will be operator-driven, with a double-ended, double-sided configuration. They will be powered by lithium-ion battery packs, enabling the entire line to run 60% off-wire. “Other streetcar projects utilize overhead wiring for everything from vehicle propulsion to the infrastructure of their maintenance and repair sites,” said Childs. “M-1 RAIL will minimize its impact on the aesthetics of Detroit’s iconic Woodward Avenue, and we also will not have the labyrinth of wires overhead at the Penske Technical Center. The ‘off-wire’ technology also enhances safety and enables faster maintenance and repair due to safe, but simpler, procedures for technicians.

Other vehicle features will include a 100% low-floor design, regenerative braking, and three doors per side to efficiently manage access and egress.

Childs said the negotiations with Inekon, coming on the heels of the recently-announced contract for the Penske Technical Center, will complete the design, engineering, and construction requirements for the M-1 RAIL project. “Among our next significant activities will be to develop requirements and solicit proposals for the system operator, which will eventually run the entire line,” he said. “ The streetcars’ final design, as well as future contracts with U.S-based or Michigan suppliers, will be announced later as the project proceeds. M-1 RAIL expects to be operational in 2016.

M-1 RAIL is described as “a public-private partnership, model for regional collaboration, and the first major transit project led and funded by private businesses and philanthropic organizations, in partnership with local, state and federal governments.”