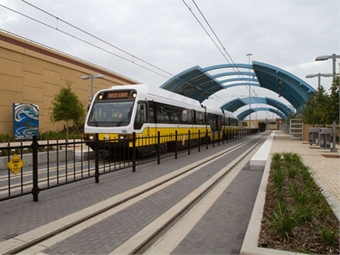 “Using a unique concurrent design-construction process, the project team was able to complete each of the Orange Line’s three segments months ahead of schedule, saving millions of dollars in the process,” ACEC said. “The August 2014 completion of the 14-mile, six-station Orange Line between northwest Dallas and Dallas/Fort Worth International Airport gives local residents and travelers from around the world a safe, efficient alternative to the city’s crowded highway network. The Orange Line also provides connections to a variety of intermodal options, including DART’s other light rail lines and a vast network of bus, vanpool, and paratransit services.”

The Orange Line project is among 170 engineering projects throughout the nation and around the world recognized by ACEC as “preeminent engineering achievements” and eligible for one of the top 2015 Engineering Excellence Awards. Judging for the Engineering Excellence Awards, “known industry-wide as the ‘Academy Awards of the engineering industry’” according to ACEC, took place in February and was conducted by a panel of more than 30 engineers, architects, government officials, media members, and academics. Awards criteria include uniqueness and originality, technical innovation, social and economic value, complexity, and success in meeting goals.

Final winners, including 16 Honor Awards, eight Grand Awards, and the “Grand Conceptor Award” for the year’s most outstanding overall engineering achievement, will be announced at the Engineering Excellence Awards Gala, a black-tie event to be held Tuesday, April 21, 2015 at The Marriott Wardman Park Hotel in Washington, D.C.

ACEC is the business association of America’s engineering industry, representing more than 5,000 independent engineering firms and more than 325,000 professionals throughout the United States engaged in the development of America’s transportation, water, and energy infrastructure, along with environmental, industria,l and other public and private facilities. Founded in 1909 and headquartered in Washington, D.C., ACEC is a national federation of 51 state and regional organizations.