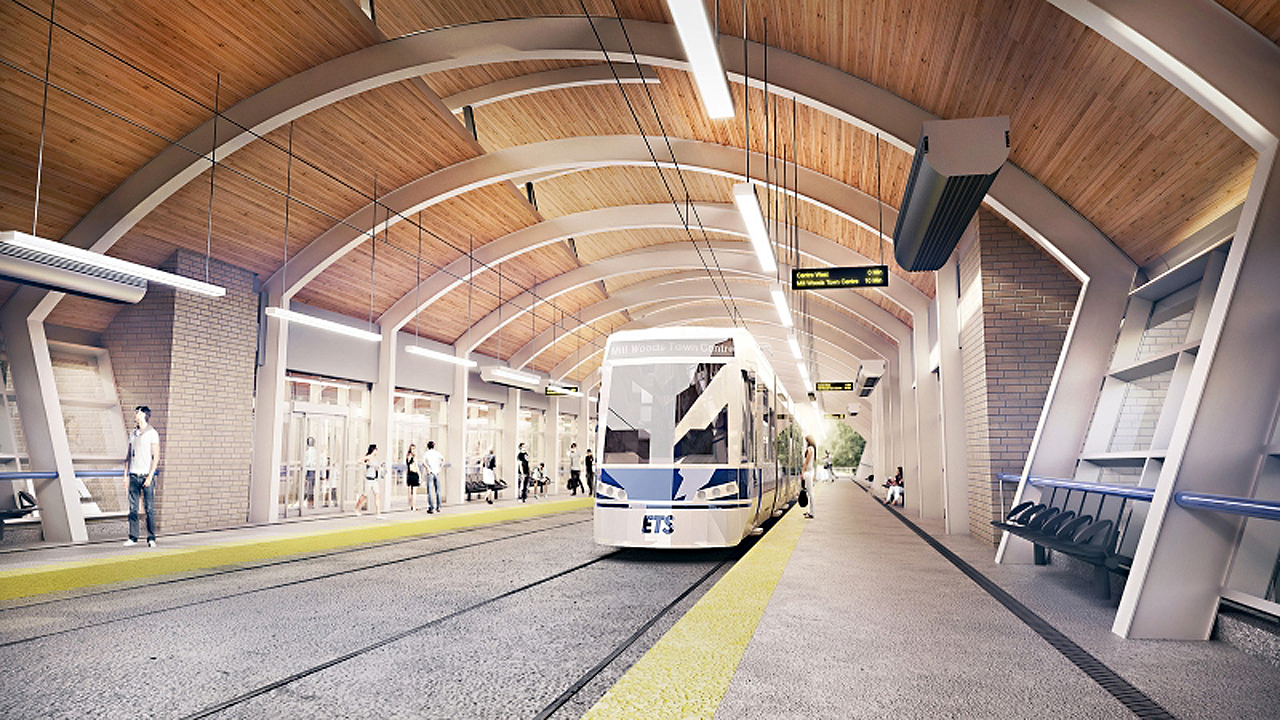 In Edmonton, it has been necessary to revise the opening date from December 2020, to a point later in 2021. Edmonton Transit’s Valley Line, which is being built by the TransEd consortium, extends from Churchill Station in downtown Edmonton (walking connection with the existing LRT) to Mill Woods Centre in southeast Edmonton. The estimated cost is C$1.8 billion.

The delay was caused primarily by the unexpected discovery of a large chunk of discarded concrete in the North Saskatchewan River Valley, over which an LRT-only bridge is required. The concrete obstruction was at the point where one of the bridge supports of the Tawatina Bridge was to be constructed. The situation required time-consuming redesign work.

Most of the short tunnel section from the north end of bridge to the start of street trackage in downtown Edmonton is complete. Rail is in place along much of the line, and some catenary installed, allowing vehicle testing to take place. The right-of-way is a combination of city streets, reserved track along arterial roads, and elevated sections. The longer aerial section, apart from a short section at the south end of the Tawatina Bridge, was chosen as a means of grade separation for two busy railway lines, and a major commercial roadway.

This elevated structure, which is now complete, required 38 spans, while the bridge approach took just six. The Davies station, which is well under way, will be on the longer elevated portion.

The new 170,000-square-foot Gerry Wright Operations and Maintenance Facility is largely complete, and able to receive LRVs. Nine Bombardier Flexity Freedom cars are on the property; these are an elongated version of those currently in service in Kitchener-Waterloo and Toronto. They will be operated by TransEd employees.

It is anticipated that all 26 LRVs will have arrived from Bombardier’s Kingston, Ontario plant by the end of this year. They are bi-directional cars with multiple-unit capability, and operate at 750 volts DC. The Valley Line requires 11 traction power substations.

The line is being laid with 115-pound rail, installed either in poured concrete or by direct fixation. Crossties are only used in the yard. Special trackwork (turnouts) have been supplied by London (Ontario) Track Works.

Construction has been slowed due to Edmonton’s severe winters, with temperatures as low as minus 36 degrees F. Thus, only the most critical work may be carried out.

The Valley Line is the first half of an undertaking that will bring rail transit to Lewis Farms in West Edmonton, including the West Edmonton Mall. The remaining project has been approved, and construction will start in the summer of 2021, with a 2026 or 2027 completion date. A detailed report will appear in a future Railway Age.

Edmonton opened its first LRT line in April 1978. It was the first “new” LRT line in North America, three years before San Diego’s.

Delivery of a 76-unit order of Bombardier Flexity Freedom LRVs for Toronto’s Eglinton Crosstown LRT line is proceeding on schedule. Twelve cars had been received at the Mount Dennis maintenance and storage facility (at the western terminal) as of mid-February 2020. They are being assembled at the manufacturer’s plant near Kingston, Ontario, approximately 200 miles east of Toronto. The LRVs are being delivered by road trailer, although the yard is accessible by a siding off Canadian Pacific’s adjacent Mactier Subdivision.

The Flexities are receiving operational testing on about one mile of Crosstown track, extending eastward from the yard to the station at Caledonia Road. Quality issues are being addressed as they occur during production.

The cars, which have single control cabs, will operate in a two-car back-to-back configuration. Metrolinx will have Bombardier install signaling and communications equipment for revenue service. Opening of the 12-mile line, originally scheduled for September 30, 2021, has reportedly been rescheduled to late 2022 due to unanticipated construction problems.

Production will begin late in 2020 of the first Alstom Citadis Spirit LRVs at the company’s new Brampton, Ontario assembly facility just northwest of Toronto. The 61-unit order will be divided between the Finch West (Toronto) and Hurontario (Mississauga-Brampton) LRT lines, both of which are in the early stages of construction. The first completed LRVs will go to the Finch West LRT, as its yard is closer to completion. Part of the OC Transpo (Ottawa) order for additional Spirit LRVs will also originate at this location.

The Crosstown, Finch West and Hurontario lines are being built to railway standard gauge, rather than the Toronto Transit Commission’s 4 feet, 10 7/8 inches.

Appreciation is extended to Metrolinx  and to Quinn Nichols, Edmonton Transit, for their assistance.