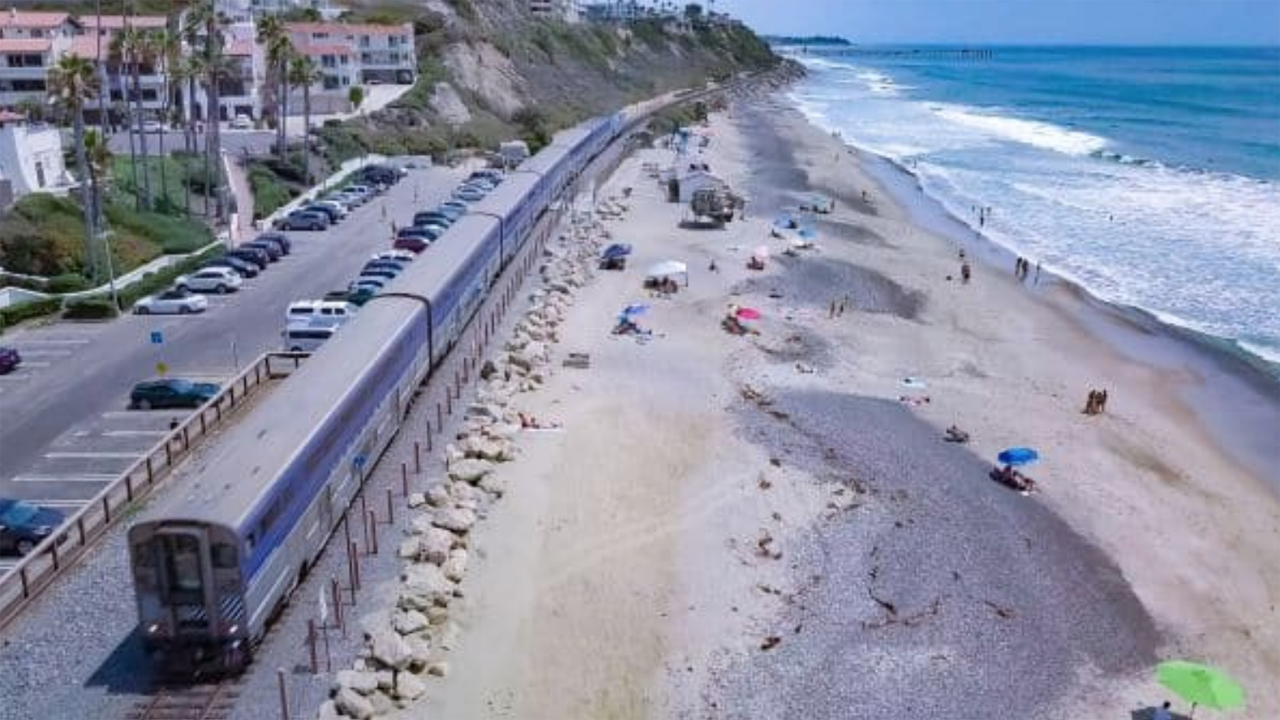 The station at San Clemente shows the vulnerability of the railway to the elements. (Photo Credit: Shutterstock)

Amtrak and Metrolink on Sept. 30 suspended operation of passenger services between Irvine and San Diego, due to safety concerns with the railway infrastructure in San Clemente following heavy rains from Tropical Storm Kay.

According to the Los Angeles-San Diego-San Luis Obispo (LOSSAN) Rail Corridor Agency, which manages the Amtrak Pacific Surfliner service on the route, consultations with geologists, geotechnical engineers and surveyors revealed that there might be safety concerns with a section of track in the San Clemente area. The LOSSAN agency decided to immediately stop operation on the route.

The Orange County Transportation Authority (OCTA), which owns the section of route in question, began conducting emergency maintenance to stabilize the formation. BNSF, which operates through the area, has brought stabilization materials to the site.

On Oct. 4, the OCTA Board of Directors and the California Transportation Commission (CTC) held special meetings to declare an emergency need for rail track stabilization, estimated to cost $12 million. CTC allocated $6 million from the State Transportation Improvement Program, and OCTA is working with state and federal officials to secure the rest.

The actions allow OCTA to secure a contractor and move forward with work to stabilize what it’s calling “the gradually sliding hillside next to the rail line.”

According to OCTA officials, the stabilization work will likely take 30 to 45 days to complete. OCTA staff presented an estimated timeline that indicated resumption of Metrolink and Amtrak Pacific Surfliner to be early to mid-November, Metrolink reported on Oct. 4.

OCTA said the track work, which is still being finalized, “will involve driving large metal anchors into about 700 feet of the slope adjacent to the railroad track to prevent it from pushing the track further toward the coast. Ground anchors are typically effective in preventing soil movement by installing the steel cables diagonally into the bedrock beneath the slope.

“A timeline for completing the work is still being determined but clearing vegetation and staging for the emergency work is anticipated to begin this week [week of Oct. 2] with installation of ground anchors beginning as soon as possible. … Until the emergency work on the slope begins, additional rip rap is being placed with the goal of further securing the existing revetment.”

According to OCTA, in September 2021, heavy rain and storm surge caused movement along the track adjacent to the Cyprus Shore Homeowners Association in southern San Clemente, near Avenida de las Palmera and Calle Ariana. At that time, Metrolink suspended passenger rail service through the area for about three weeks and stabilized the track movement by placing more than 18,000 tons of rip rap (large boulders) along the coastal side of the track.

“While that emergency work stabilized the track for several months, geologists and engineers monitoring the area determined after additional storm surge last month that the adjacent slope was moving again and the track was moving .01 inches to .04 inches per day,” OCTA reported. “It became evident additional mitigation measures were necessary, including to stabilize the hillside east of the track.”

In addition to the immediate repair work, OCTA said it “continues to review long-term options for protecting the rail line in this area and throughout the coastal region and will seek input from the public and all stakeholders as it continues to study the issue.”

All Metrolink Orange County Line and Inland Empire-Orange County Line services are suspended south of Laguna Niguel/Mission Viejo station. Trains will continue to operate between Los Angeles and Laguna Niguel/Mission Viejo Station with no alternative transport to San Juan Capistrano, San Clemente or Oceanside available. October Monthly Pass holders who are impacted by the suspended service and unable to use their pass are eligible for a refund, according to Metrolink.

The 350-mile (564-kilometer) LOSSAN rail corridor runs from San Luis Obispo to Los Angeles and San Diego, and is the busiest state-supported intercity route in the United States, carrying around 2.7 million passengers per year before the COVID-19 pandemic. Amtrak operates 12 daily Los Angeles-San Diego Pacific Surfliner trains on the route, which is also used by Metrolink and Coaster commuter trains and freight traffic.

Line improvements worth nearly $1 billion are planned to improve capacity and resilience of the corridor, including providing double track on the section from Orange County to central San Diego.