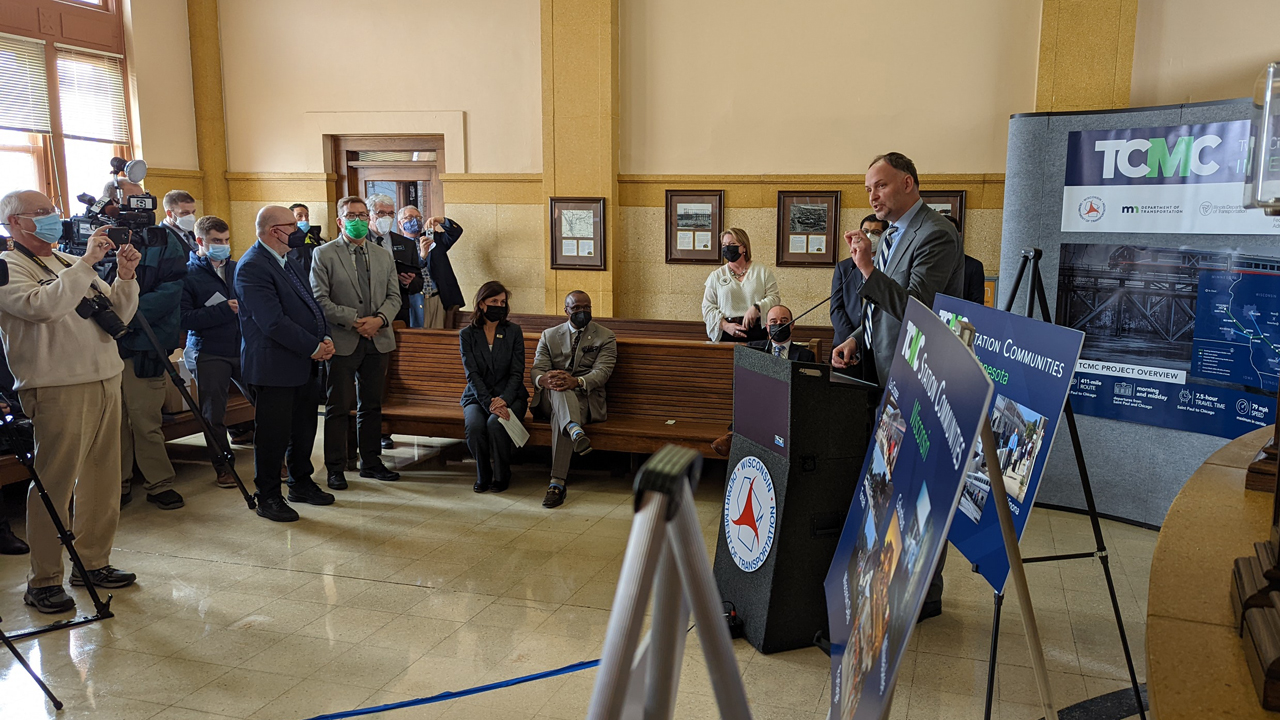 “Through the leadership of [FRA] Administrator Bose, strong partnerships with state and local leaders in Wisconsin and Minnesota, and our productive relationship with Canadian Pacific, we are moving the addition of Amtrak service between the Twin Cities, Milwaukee and Chicago to the forefront of our growth efforts,” said Amtrak President and CEO Stephen Gardner (pictured), during a March 9 announcement at the La Crosse (Wis.) Amtrak Depot.

The Wisconsin and Minnesota departments of transportation are moving ahead on the Twin Cities-Milwaukee-Chicago (TCMC) Intercity Passenger Rail Project following receipt of a $31.8 million federal grant.

The grant will go toward station and rail infrastructure improvements, including grade crossings, that will allow the addition of a second daily passenger rail round-trip along the 411-mile corridor, which links the Twin Cities (St. Paul and Minneapolis, Minn.); La Crosse and Milwaukee, Wis.; and Chicago, Ill., and is shared by Amtrak Empire Builder and Hiawatha Service trains. When combined with the Empire Builder, the corridor will offer two daily round trips between St. Paul and Chicago.

The expanded service is slated to start in 2024 (or sooner), and after the first year, is projected to serve more than 124,000 riders.

The state DOTs in 2020 were designated as recipients of the $31.8 million Consolidated Rail Infrastructure and Safety Improvements (CRISI) grant from the FRA, and have now met the requirements to receive it, according to Amtrak, which contributed $5 million as a match.

“This vital rail project came together because the federal government not only recognized its importance to the region but the extraordinary collaboration among states, local economic groups, and freight and passenger rail,” WisDOT’s Thompson said.

“MnDOT is proud to be a partner in this effort to expand service on the TCMC corridor,” MnDOT’s Daubenberger said. “This grant is an important piece in our shared goals to enhance our regional economies, from the Twin Cities metro area to our thriving small towns in Greater Minnesota.”

“Through the leadership of Administrator Bose, strong partnerships with state and local leaders in Wisconsin and Minnesota, and our productive relationship with Canadian Pacific, we are moving the addition of Amtrak service between the Twin Cities, Milwaukee and Chicago to the forefront of our growth efforts,” Amtrak’s Gardner said. “While we cannot announce a TCMC start date—yet—know all of us working together can make this happen in months instead of years.”

The CRISI Grant Program, “which made this nearly $32 million federal investment possible, is funded at even higher levels over the next five years thanks to the Bipartisan Infrastructure Law,” noted FRA’s Bose. “This funding means even more opportunities like this one to advance transformational rail projects going forward.”