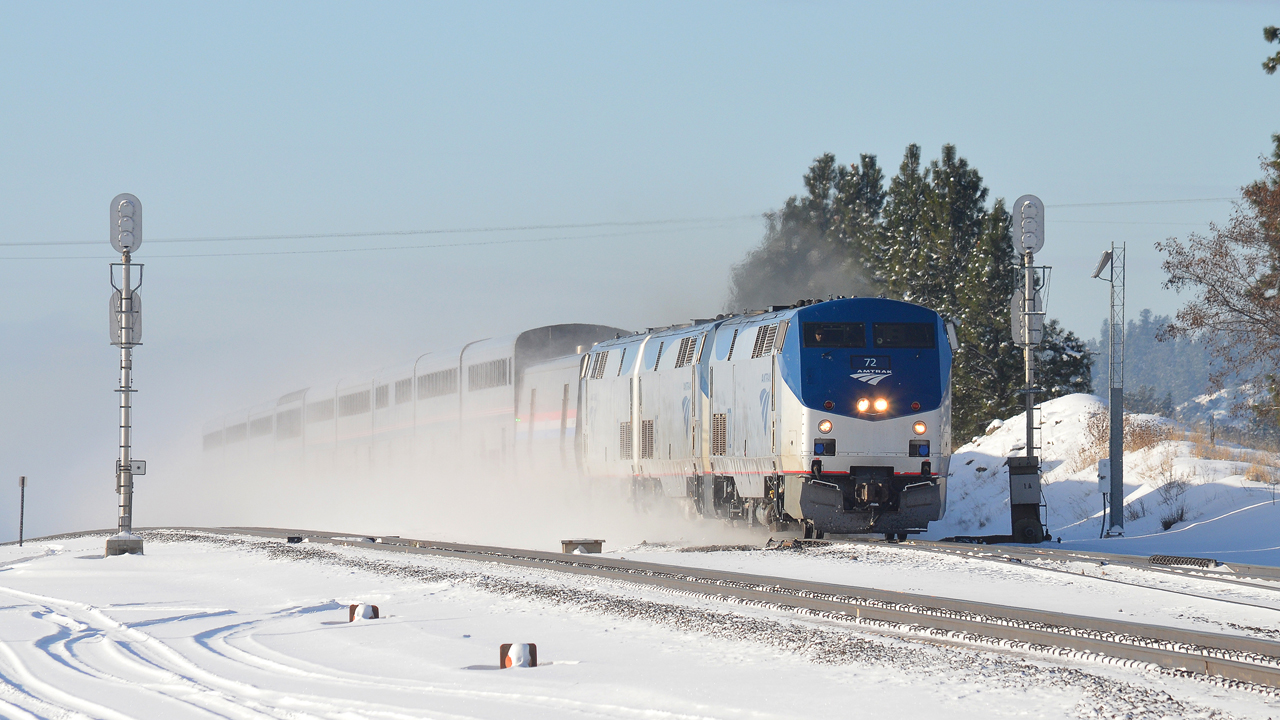 Amtrak’s recent winter meltdown was not the first time the passenger railroad faced widespread delays during the holiday travel season. On Dec. 31, 2021, Train No. 8 was some nine hours late when it passed Hauser Jct., Idaho, where the temperature was only 10 degrees Fahrenheit. That’s mild compared with the sub-zero weather the Empire Builder routinely faces on the northern plains. (Photo and Caption by Bruce Kelly)

Severe winter conditions were blamed for Amtrak suspending a number of its long-distance and regional trains across the nation’s Northern Tier and Midwest during the Christmas holiday week. Then came West Coast cancellations in the wake of heavy rains and flooding during the first week of January.

Back in September, Amtrak temporarily suspended all of its long-distance trains when a potential freight rail strike was looming. And for the past three months, Amtrak’s Pacific Surfliners—as well as Metrolink commuter rail trains—have not operated through the mid-section of California’s Los Angeles-San Diego corridor because of landslide stabilization work being done near San Clemente.

Amtrak’s Empire Builder, meanwhile, has been experiencing service setbacks that began long before this winter. And those setbacks have been brought on by more than just extreme weather.

A “perfect storm” of troubles took their toll on Amtrak Train 7, the westbound Empire Builder, which departed Chicago—on time—on Dec. 17, 2022. Snowfall and temperatures as low as –20 degrees Fahrenheit settled in along much of the BNSF Northern Corridor—aka, the Hi Line—that carries the Empire Builder across North Dakota and Montana. Halfway into its trip to Seattle and Portland, Train 7 had fallen some two hours behind schedule by the afternoon of Dec. 18. And when it reached Sandpoint, Idaho, the next morning, it was nearly seven hours behind schedule.

Contributing significantly to Train 7’s loss of time were the breakdowns of one or more of its three Siemens Mobility-built ALC-42s (“Amtrak Long-Distance Charger, 4,200 HP” diesel-electric locomotives). One of those incidents occurred shortly after the train crossed the Continental Divide at Marias Pass in northwestern Montana. While on a descending grade, the train lost all electrical power due to locomotive failure just a few miles east of Essex, Mont., coming to an abrupt stop inside one of the snowsheds that protect the route from avalanches. Close to another hour was lost before No. 7 reached its next stop.

By the time Train 7 arrived in Seattle and Train 27 (which splits off at Spokane, Wash.) arrived in Portland on Dec. 19, Amtrak was already announcing plans to cancel departures of the Empire Builder on Dec. 20 and 21 “due to delayed operations for the past few days and forecasted severe weather.” That service suspension was then extended through the Christmas weekend in the wake of ice storms hitting the Pacific Northwest; flash floods compromising BNSF track near Connell, Wash.; and severe cold and high winds from Montana eastward.

Riding the first run of Train 8 after Amtrak resumed its Empire Builder was a Siemens technician who had been flown from New Orleans to Seattle for the purpose of monitoring the performance of the ALC-42s and providing assistance in the event of a malfunction.

With long-distance modifications (larger fuel tank, enhanced Head End Power generator, and more) that set them apart from the Siemens Chargers built for intercity passenger and commuter rail service in the U.S. and Canada, the ALC-42s have been problematic since their debut on the Empire Builder. In fact, the first in-service run of Chargers on Train 7 in February 2022 encountered enough technical setbacks when preparing to depart Chicago that an older GE-built P42DC was repositioned to lead the train.

Those setbacks were said to include locomotive connectivity issues relating to Positive Train Control (PTC). While often coinciding with the presence of Siemens Chargers, PTC failures on the Empire Builder have also occurred when other power is involved. Referring back to that first Charger trip out of Chicago in February 2022, Amtrak’s Marc Magliari said, “The initial run was reconfigured because of a back-office server PTC issue, not the units themselves. PTC communication/initialization delays are not unique to a particular series of locomotives.”

Extreme cold has been the most common factor in breakdowns of ALC-42s on the Empire Builder. Railway Age reached out to Amtrak for comment on its new Chargers, and to find out if Siemens was apprised of the problem and working on a solution. In response, Kara Evanko, Vice President and Head of Communications at Siemens Mobility North America, provided the following details:

“Over the course of the past couple of weeks, Siemens Mobility has been working closely with Amtrak to identify the root cause of a number of isolated incidents of ALC-42 power loss occurring when under very specific and unusually extreme circumstances where the locomotive experiences drastic changes in temperature. As a result, we’ve identified both a software solution and an additional hardware improvement that will eliminate the issue experienced. The software update has been implemented to the entire fleet, greatly reducing the potential for incidents. The hardware modification will be completed as quickly as possible. The phenomenon was not encountered on other Charger locomotives, which have different power arrangements than the long-distance ALC-42 locomotives. Given that the ALC-42 is a new addition to the Amtrak fleet, Siemens is providing Amtrak with additional support and training regarding the operation and maintenance of the locomotives, to help eliminate downtime and optimize operations.”

One external design feature of the ALC-42s that has caught notice from a number of trackside and industry observers is the large, open-screen area on both sides of the locomotive body, just behind its mid-section and directly below the radiator and cooling fans (see picture above). Snow often accumulates inside this open cavity, leading some to speculate that it might be interfering with the locomotive’s mechanical or electrical systems. According to Kara Evanko at Siemens, “Snow entering the engine cooling unit compartment is not a problem. The compartment is designed to be exposed to the elements as it serves to cool the engine and needs airflow for that.”

Even when extreme winter conditions are not to blame, additional factors can delay Amtrak’s Empire Builders, making late trains even later. The failure of one locomotive in an Amtrak consist, for example, can result in host railroad BNSF placing one of its freight locomotives on the head end to keep the train and its passengers moving. Unfortunately, having a freight unit on the point limits the Empire Builder to the Northern Corridor’s maximum authorized freight speed of 60 mph, instead of the 79 mph normally allowed for Amtrak. That drop in speed can accumulate into hours of lost time over the remainder of the trip.

Once an Amtrak train falls far enough behind schedule on a busy freight route like the Northern Corridor, it loses what is known as its “slot,” which is the normal time frame that a host carrier has arranged to accommodate passenger movements through its busy schedule of freight traffic. An Empire Builder that’s fallen several hours out of its slot may face greater interference from freight trains whose on-duty times, positioning and dispatching are arranged based on the normal Amtrak schedule.

Crew rest and availability is one of the lesser-known causes of delay for the Empire Builder, and is felt acutely at Minot, N.D. Eastbound Train 8 is scheduled to arrive in Minot at 10:08 p.m. Its inbound engineer and conductor, who have been with the train since Shelby, Mont., are normally the only crew available to take charge of the following morning’s Train 7, scheduled to depart Minot at 9:51 a.m. That’s an incredibly tight turn considering the crew’s mandatory 8-hour rest period. Whenever No. 8 arrives in Minot more than a few hours late, the passengers and onboard personnel of the next day’s No. 7 will likely sit motionless at the depot for hours until the rested crew comes on duty. To help combat such delays, “[w]e have driven and flown crews across the Hi-Line from time to time and will do so when possible, between the St. Cloud [Minn.] and Shelby [Mont.] crew bases,” according to Amtrak.

While Amtrak’s order for 125 ALC-42s represents a significant investment in America’s long-distance passenger service, there will continue to be operational struggles for trains like the Empire Builder to overcome. Those who view Amtrak’s long-distance trains as a government-subsidized land cruise catering to vacationers and retirees fail to recognize the vital transportation that the Empire Builder provides to rural communities across more than a thousand miles of the northern U.S.—communities where air and bus service are virtually non-existent, and where Amtrak may be the only viable option for long-distance travel, particularly in winter.