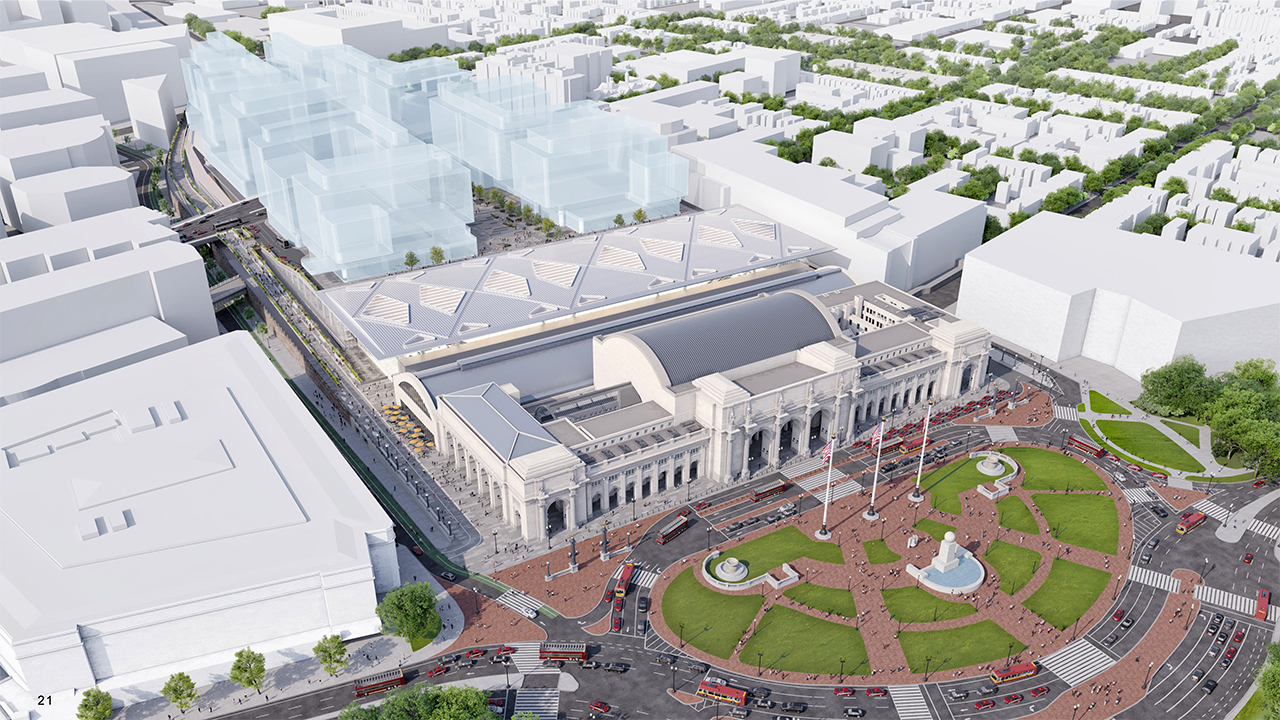 The multi-billion-dollar Washington Union Station Expansion Project, intended to modernize and revitalize one of the most iconic and beautiful train stations in North America, took a step further on June 16 when Grimshaw Architects, the project’s architectural firm, gave a presentation to the U.S. Commission of Fine Arts (CFA), which reviews and approves design proposals for certain public and private properties in the nation’s capital.

The presentation included renderings of station tracks and platforms, a new train hall and mezzanine, and new entrances. Grimshaw Architects, according to National Public Radio affiliate WAMU 88.5 reporter Amanda Michelle Gomez, “stressed the importance of creating a bright and expansive space that is more accessible for visitors, by adding a new train hall that would connect people to all the different modes of transportation offered at the station, and new entrances so people can enter from different parts of the city, including the H Street Corridor.”

“The hope is to take what is currently a below-ideal space for passengers, and open that up, and get on and off buses and trains in a straightforward fashion,” said Nikolas Dando-Haenisch of Grimshaw Architects.

The Federal Railroad Administration owns Union Station and is heading the project, along with Amtrak. They are seeking federal funding through the IIJA infrastructure program President Joe Biden signed into law in 2021. FRA Director of Communications Dan Griffin told WAMU that “ it’s premature to estimate costs and the project timeline at this time.” An earlier estimate priced the renovation at roughly $10 billion, with completion by 2040.

Based on the plans presented to the CFA, passengers and visitors will be able to enter WUS through the original century-old structure designated a National Historic Landmark in 1964, or through  newly-constructed entrances on each side, to alleviate vehicular traffic at Columbus Circle, in front of the station. Dando-Haenisch said the redevelopment does not include changes to the original building.

A new train hall, “designed for daylight and for passengers to more easily spot where to catch their bus or train” also connects to the WMATA Metro Red Line and  and DC Circulator buses. Parking and a pickup/drop-off area will be on the lowest level, along with four concourses housing shops and restaurants. Escalators and elevators connect with the train station, above which is a bus station.

“The project assumes increased use, so bus and train capacity has been added,” WAMU noted. “The highest level offers an outdoor deck where people can be dropped off or picked up, or simply [enjoy] some green space. Developer Akridge plans to create a mix of residential and commercial buildings next to the center space with greenery, along the 15 acres of air rights north of Union Station. However, that $3 billion project, called Burnham Place, is contingent on the redevelopment of the station.”

This newest proposal was developed with public feedback, among whom are local government officials critical of an earlier proposal with a large parking garage. CFA officials “seemed to largely support the plan,” WAMU reported. “However, a few voiced reservations that the historic building would become just a passthrough to the new train hall.”

The next step is for the FRA to complete an EIS (environmental impact statement). Final design and construction can then commence.