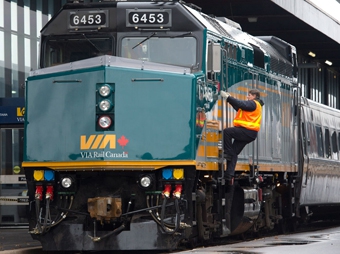 Prospects for VIA Rail’s dedicated central Canada corridor appear to be on the move as the publicly owned passenger train operator submits its business case, and an accomplished rail executive is named to prepare the government’s promised infrastructure bank.

Details of VIA’s vision for a fast and frequent (but not high-speed) passenger schedule using a new fleet of trains powered by Quebec’s abundant and self-renewing hydro electricity was first revealed by this magazine in its April 2016 print and digital edition. The contents of the new business case remains confidential.

A year ago, VIA was provided government funding to develop an engineering and financial plan, but not the authorization nor capital commitment to proceed. Instead, the Liberal government of Justin Trudeau has focused on encouraging municipal transit projects, including an extensive, automated commuter network for Montreal, driven by Quebec’s public pension fund the Caisse de dépôt et placement (“Montréal REM project expanding”).

“We are encouraged by the commitment of the government to build strong communities through public transit investment, said Diaby. “An improved public transit system will allow VIA Rail to continue facilitating the move towards true sustainable mobility through our intermodal partnerships that represent levers to increase ridership on trains by providing passengers with a simplified and seamless travel experience.”

In the meantime, the government is committing C$867 million (US$646 million) for VIA’s existing operations over the coming three years.

VIA declined to comment directly on the role the anticipated infrastructure bank might play in funding the Corridor project. However, in March, Ontario’s Metrolinx CEO Bruce McCuaig was named executive adviser for design of the promised infrastructure bank. Once legislation is adopted to create the new public-private financial institution, McCuaig would be the obvious candidate to lead it. His appointment clearly indicates transit and passenger rail will be the bank’s principal focus.

“We will continue to work with Government of Canada officials on the study of high-frequency rail and fleet renewal and remain confident of the relevance of these two projects for our passengers,” Diaby concluded.