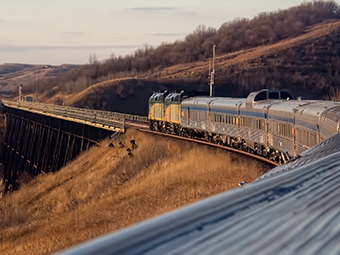 VIA Rail Canada updated numbers of its record-breaking summer, to include record ridership numbers for the past Labour Day holiday weekend, September 1 to 6:

Close to 68,000 passengers travelled on trains heading across the country from September 1 to 6, an increase of 5.4% compared to previous year and new performance record.

The city of Toronto attracted the greatest number of travellers by far, followed closely by Montréal and Ottawa. These destinations were chosen by 269,000, 159,000, and 102,000 travellers respectively. Fridays were the busiest travel days, with an average of 14,000 people travelling per week on that day.

August saw the highest ridership of the summer season. The week of August 8 to 14 was the busiest of the summer. During the month, more than 344,000 people chose to travel on the train.

In addition, 63,000 people took long-distance trains between Montreal and Halifax (the Ocean), and Toronto-Vancouver (the Canadian).

“Canada is one of the most beautiful countries in the world and the smarter way to preserve its natural beauty is to leave your car at home and discover it by train.” said Yves Desjardins-Siciliano, President and Chief Executive Officer of VIA Rail. “VIA Rail’s growing popularity is due in a large part to the commitment of the employees in our call centres, stations, on board the trains and in maintenance centres. They continue to demonstrate their commitment to satisfying the needs of our customers with professionalism and in a more human way.”