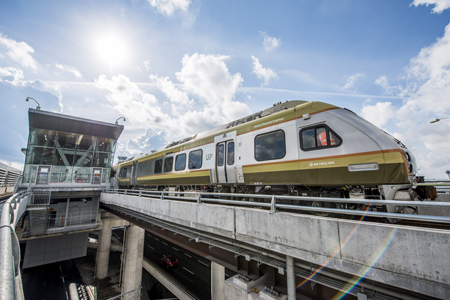 The trains connect Union Station, the city’s intercity and commuter rail center, located in the heart of downtown Toronto, with Lester B. Pearson International Airport in the adjoining city of Mississauga, northwest of Union. The airport is named in honor of Lester B. (Mike) Pearson, Prime Minister of Canada 1963-1968, and a Nobel Peace Prize winner.

From Union Station, UPE trains proceed westward through terminal trackage to Bathurst Street, then veer to the northwest on the former CN Weston Subdivision. This track is now used by GO Transit and VIA Rail intercity trains. The new trains follow the Weston Subdivision to a point slightly northwest of the airport, then veer off onto newly-constructed trackage. A ramp leads to a concrete, two-track elevated structure that carries the rails to the Airport Station, which is in close proximity to Terminal One. The station is connected to the other airport terminal, Three, by the Link Train, a small, automated, cable-powered elevated train. The platforms will accommodate a maximum train length of three cars. The station opens into a concourse that leads to a covered walkway over to Terminal One.

UPE is a premium-fare express service with just two intermediate stations: Weston, at Lawrence Avenue, and Bloor, at Bloor and Dundas Streets. The latter has outdoor access to the Toronto Transit Commission’s (TTC) Dundas West station, situated on the Bloor-Danforth crosstown route. Plans are to build an underground pedestrian link within two years, after the necessary property has been purchased; there have been difficulties in doing so, and expropriation may be necessary. Another station is planned, on Eglinton Avenue at the western terminal of the Eglinton Crosstown LRT Line. This project is currently under construction and scheduled to open in 2020. 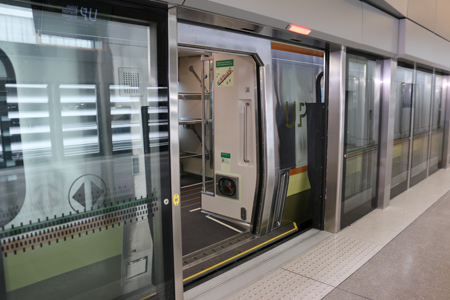 Service is provided by 18 DMUs built by Japan’s Nippon Sharyo. After arriving by ship at Savannah, Ga., they were transported on flat cars to Rochelle, Ill., near Chicago, where final assembly took place. The cars were then moved on their own wheels to Toronto, to VIA Rail’s Toronto Maintenance Centre, across from GO Transit’s Willowbrook Yard and shops. Inspection and crew training followed.

The cars, which operate in two or three car consists, have Tier 4-compliant diesel engines. UPE is the first North American passenger rail service to meet Tier 4, which reduces airborne particulate emissions by 90%, and nitrogen oxides by 80%, compared to existing technology. The trainsets are designed for conversion to electric propulsion, which is also planned in the mid-term for a number of GO Transit operations. The elevated structure to the airport station was built with base supports for catenary center poles. Each car is 85 feet long, 10.5 feet wide and 14. Feet high. The cars weigh 165,000 pounds empty, and offer luggage racks and overhead storage compartments. WiFi, charging stations and infotainment screens are offered. 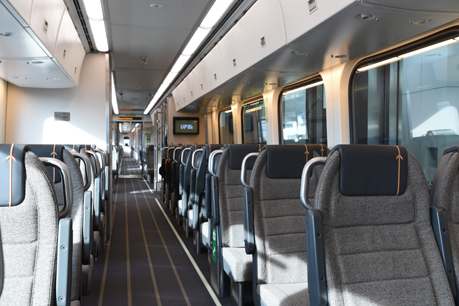 Metrolinx onboard staff use Bytemark hand held units for ticket sales and electronic farecard (PRESTO) validation. By late 2015, the UPE Mobile APP will allow passengers to buy and use mobile tickets, check train times and receive system notifications. Fare purchase is also available at the stations, from staff and machines. 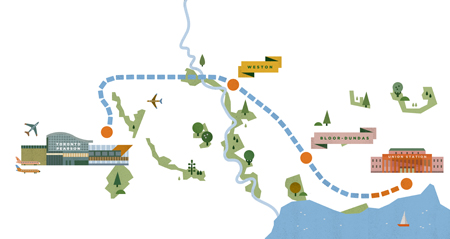 A rail link to Toronto’s main airport had been discussed for decades, perhaps as far back as 1958, when a monorail line was briefly considered, then dropped. In the late 1970s, an LRT line, to be operated by the TTC, was contemplated. This would have extended northward from the newly-constructed Kipling Station, western terminal of the Bloor-Danforth Crosstown Subway, on an electrified right-of-way. A single-track elevated platform was actually included in the station, but nothing came of the LRT plans, perhaps due to other priorities. 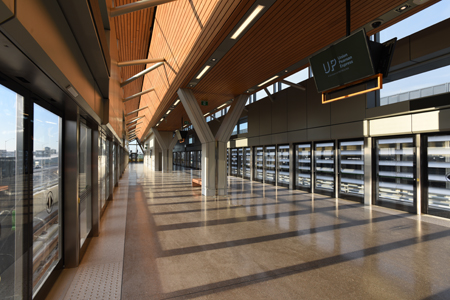 By 2000, however, the urgent need for an airport rail link was readily apparent. Traffic congestion on the highways leading to the airport was steadily worsening, increasing travel times significantly and causing missed connections. Government officials also realized that travelers now expected a rail service for Pearson Airport, one of North America’s busiest. 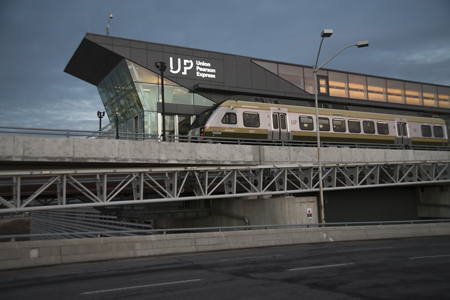 At first it was planned to have the UPE project undertaken by private enterprise, using the design-build-finance concept. However, after a thorough analysis of the financial implications, the selected company withdrew. The Province of Ontario, rather than see the project die, stepped in and financed it, with Metrolinx assuming overall responsibility. Metrolinx is a provincial agency responsible for public transportation in the Greater Toronto area, and the national capital of Ottawa. The estimated cost, in 2010, was C$456 million.

UP Express is branded as a Metrolinx service distinct from GO Transit, which began running Toronto’s commuter trains in 1967. The new rolling stock, with its distinctive livery, carries only a small Metrolinx designation, without the distinctive GO herald.

Work began on the UPE project in 2010 and was substantially complete by the end of 2014, enabling testing to begin. However, as of opening day some finishing work remained at the Weston and Bloor stations; the goal had been to have UPE operational in time for the Summer 2015 Pan American Games in Toronto.

Construction of the elevated spur was quite challenging. It had to be built above existing highways, access roads, ramps and overpasses, avoiding buildings. At the Airport Station, careful planning was needed to insure that airport operations continued uninterrupted. Due to the confined working environment, a tower crane was used for both the station and the elevated structure.

The spur is 9,850 feet long and 92 feet high at one point, providing a spectacular view of the city. The steepest grade is 2%. The structure consists of a single concrete track bed for two tracks and double supporting pillars. There are six major curves and five separate speed zones. Construction was arranged under Infrastructure Ontario’s design-build-finance agreement with a consortium, the first use of this method by Metrolinx.

Near Weston Station, the tracks were depressed through the town center with road bridges above, to reduce traffic disruption at grade crossings and noise levels from now-frequent train operations. A grade crossing of Canadian Pacific’s busy North Toronto Subdivision freight line was eliminated in an earlier project, thus avoiding UPE service delays.

At Union Station, a separate UPE station, away from the existing GO Transit and VIA platforms, was built. It is situated at the west end of the former CN Express wing on the west side of York Street, which represents the western side of the main Union Station structure.

The UPE facility is some distance from the TTC subway entrance, GO concourse and GO bus terminal; however, it is readily accessible by taxis, by elevator from York Street, and by the existing walkway to the CN Tower and Rogers Centre (home of the Toronto Blue Jays). It provides single-track side-level boarding, glass enclosed with platform screen doors for weather protection. The Airport station is also enclosed and uses platform screen doors.

Construction at Union Station was complicated, as the site is located between one of the busiest intercity and commuter rail corridors in Canada, and a busy pedestrian thoroughfare. There also was occupied building space directly below to be factored in. Sustainability was the watchword in the design process. Features include a high efficiency in-floor heating system, LED lighting, and extensive natural lighting, reducing electricity costs. The station is directly connected to the old Union Station, which in turn is linked to the subway and the downtown underground pedestrian network, PATH.

Outbound passengers at Union Station may use amenities such as airline check-in kiosks and flight information screens; a premium coffee bar is provided.

The one-way adult fare, Union to Pearson, is $19 with a PRESTO card; $27.50 with credit and bank cards and cash. The usual discounts are provided for seniors, children, airport employees and others. Travelers with lengthy layovers at the airport and visitors may also obtain discounts.

With UPE inauguration, public transportation in the Toronto area has entered a new era. The availability of safe, fast, comfortable, weather-resistant transportation to and from the city’s main airport represents a tremendous asset for travelers, airport and airline employees, and the local economy.