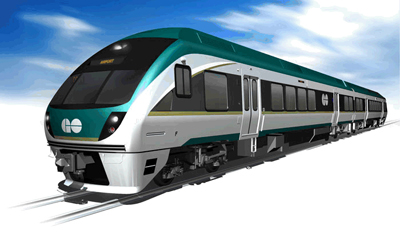 Contracts have been awarded to Nippon Sharyo U.S.A./Sumitomo Corp. of America for 32 railcars, configured as either two- or three-car DMU trainsets with the 760 hp (567 kW)-rated engine installed under-floor in each railcar. The first DMU is scheduled for delivery in 2014 for UP Express (opposite), the air-rail link currently under construction from downtown Toronto Union Station to Toronto Pearson International Airport, connecting the two busiest transportation hubs in Canada with a fleet of 18 railcars to be operated by GO Transit. Another 14 railcars will be delivered to the Sonoma-Marin Area Rail Transit (SMART) rail line, north of the San Francisco Bay, running on a new line currently under construction.

To meet EPA Tier 4 Final regulations and the equivalent Stage IIIB standards for railcars in Europe, the 19-liter engine is fully integrated with Cummins Selective Catalytic Reduction (SCR) aftertreatment. The SCR system reduces exhaust emissions to “extremely low levels,” with the three-car, three-engine configuration totaling 2,280 hp (1,700 kW) output, said Pence. “In addition to its clean-engine credentials, the QSK19-R has very fast torque response, with a peak output of 2,275 foot-pounds (3,084 N•m). This allows the DMU to achieve rapid acceleration from idle—an important advantage in reducing journey times on routes with short distances between stations.”

“Smart electronic controls and advanced combustion techniques result in a remarkably smooth power delivery from the QSK19-R, providing a comfortable travel experience for passengers when the DMU runs at its top speed of 90 mph (145 kph),”Pence added. “The engine runs quietly, with minimal vibration, due to an upgraded common-rail fuel system able to precisely balance fueling across the six cylinders. The horizontal envelope of the QSK19-R allows for a highly compact installation within a self-contained power module positioned underneath the railcar body. This space-efficient installation enables a flexible seated capacity of 180 to 237 passengers for the three-car DMU trainset, together with additional space for standing passengers during busy periods. Passenger convenience is further enhanced with step-in level boarding from the platform and allocated space in each railcar for up to 12 bicycles, wheelchairs, or strollers.”

Onboard power such as air-conditioning is generated from the QSK19-R by means of a high-efficiency drive shaft, eliminating the need for an additional engine for head-end (hotel) power. “Although compact in size, the QSK19-R shares the same inherent structural strength of larger Cummins high-horsepower engines, and uses premium materials throughout the engine to enhance durability,” noted Pence. “As a result, the engine is capable of operating for up to 20,000 hours before a rebuild may be required, dependent on duty cycle. Multiple-life capability means that the QSK19-R engine continues to work at peak performance, even after three rebuilds.”

“The QSK19-R already comes with an enviable reputation for uptime reliability well proven in DMU intercity operations in Germany, the United Kingdom, Australia, and China,” said Pence. “A population of more than 1,700 railcars powered by the QSK19-R makes this by far the most successful underfloor railcar engine in the industry. We are delighted to be working with Nippon Sharyo to power its new DMU, which is uniquely designed for North America and will offer a fast, clean, and energy-efficient travel alternative to heavily congested highways. Production of the QSK19 engine is now under way at our Seymour facility, which means we will see the new Nippon Sharyo DMU up and running this year, ahead of when the Tier 4 Final regulations take effect.”