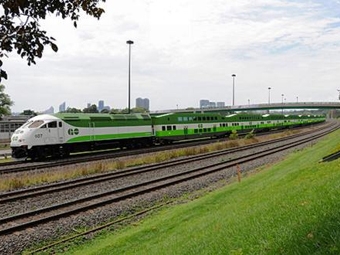 An update on plans to establish regular-interval all-day services on regional/commuter rail lines in southern Ontario was presented at the meeting of the Metrolinx board of directors on Dec. 11, 2014. Metrolinx is the regional public transportation authority for the greater Toronto and Hamilton area.

At the heart of the plan is the SmartTrack proposal, which involves using GO Transit’s Kitchener and Stoufville lines to create a 33-mile, 22-station east-west electrified corridor providing an express service across Toronto. The project could be completed within seven years using $C2.5 billion in funding from the city. SmartTrack would be delivered and operated by Metrolinx, using the Toronto Transit Commission (TTC) fare system.

Metrolinx says the preliminary business case for the RER project is positive and it has begun developing a public consultation strategy. In addition, it says it will work closely with CN, Canadian Pacific, and Via Rail to advance service expansion and electrification, particularly on lines owned by CN and CP.

Work is also being carried out to develop a service concept for each line, together with infrastructure requirements and a phasing plan to determine the priority corridors. Metrolinx expects to complete the service concept in the first quarter of next year.

With a more intensive two-way service, double-tracking and additional platforms will be needed on some lines and the project may also require grade-separated junctions and the elimination of grade crossings at some locations. New stations are also being considered.

According to the preliminary business case, ridership on GO Transit could more than double from 200,000 per day to more than 450,000 by 2031 with the implementation of RER, while GO’s share of trips of five miles or more could triple from 3.6% by 2041. Metrolinx says further work will now be carried out to define costs and benefits on a line-by-line basis.

A number of early actions have been identified to implement the RER project, and environmental assessments have already been completed on additional tracks on the Stoufville and Barrie Lines together with electrification of the Kitchener Line (including upcoming the Union-Pearson airport express service) and the Lakeshore West expansion. A number of other projects that support the RER plan are already under way such as the Union Station modernization, while contracts have been awarded recently for the Union Station Corridor resignaling, which will be essential to increase capacity in the core of the network.

Toronto‘s new mayor, John Tory, is a strong proponent of SmartTrack. According to the Toronto Star, SmartTrack, and improving public transportation in the greater Toronto area in gheneral, was tops on the list for Tory’s first official meeting with Canadian Prime Minister Stephen Harper on December 11.