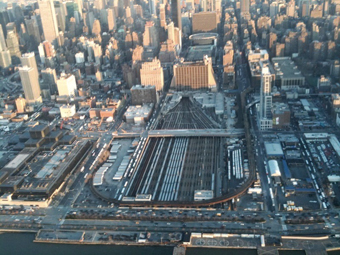 The funding, the trio said, “will help pave the way for two desperately needed, flood-resistant [Northeast Corridor] tunnels under the Hudson River, between New York and New Jersey,” that, as part of Amtrak’s Gateway Program, will supplement Amtrak’s existing Hudson River (“North River”) NEC tunnels. “Once the funding is finalized, it will help preserve space in the only [possible new] gateway into Manhattan’s Penn Station—[beneath] the Hudson Yards Redevelopment Project.”

“During Hurricane Sandy, the 103-year old Hudson River tunnels flooded for the first time ever, shutting down the Northeast Corridor and highlighting the urgent need for flood-resistant infrastructure,” the three officials—all key supporters of Amtrak—said. “According to engineers, the only option for additional rail access to Manhattan and NY Penn Station is under the Hudson Yards Redevelopment Project, and infrastructure needs to be built before construction of certain portions has begun. Major federal investment would get shovels in the ground to start Amtrak’s Gateway Program and preserve new tunnel space into Manhattan. The Northeast Corridor is currently at capacity and the threat of another flood looms large.”

In addition to the lessons learned from Hurricane Sandy, Amtrak’s Gateway Program has taken on increased urgency in recent months as engineers have determined that the only viable route to connect the Gateway Tunnels directly to Penn Station New York will intersect the Hudson Yards Redevelopment Project, where a joint venture of Related Companies and Oxford Properties Group has commenced construction on a multibillion-dollar, mixed-use commercial and residential development project. Related/Oxford and the New York Metropolitan Transportation Authority, which owns the Long Island Rail Road’s John D. Caemmerer West Side Yard train maintenance and storage facility (pictured at left) just west of New York Penn Station—over which the Hudson Yards project will be built—are working with Amtrak to design and begin construction this year on an 800-foot concrete casement to preserve future right-of-way for the Gateway Tunnels through the site.

On May 22, Amtrak’s board authorized entering into agreements for the construction of the casement and other associated activities with Related/Oxford and the NYMTA upon securing the necessary federal funding—which is now in place.

USDOT funds will go toward the casement (also known as a “tunnel box”), which will be built between 10th and 11th avenues beneath the Hudson Yards Redevelopment Project. This casement will preserve the right-of-way for the two new flood-resistant Gateway Tunnels into NY Penn Station, and will be built simultaneously with the Hudson Yards project. “Without these steps, the construction of the Hudson Yards project could have proceeded without the casement, and the opportunity to build these new tunnels serving Penn Station’s existing tracks would have been potentially lost forever,” said Schumer, Lautenberg (who died on June 3 at 89 from pneumonia complications), and LaHood.

Damage to the NEC during Sandy was significant and, in some places, unprecedented. The storm’s massive surge flooded four of the six 103-year-old tunnels under the Hudson and East Rivers, for the first time in their history. Both Hudson River tunnels were flooded with 3.25 million gallons of brackish water. The flooding of these tunnels halted all Amtrak NEC and NJ Transit service into Manhattan for roughly five days, impacting nearly 600,000 daily riders. The LIRR also suffered a significant loss of capacity and service due to the flooding of two of Amtrak’s East River Tunnels. 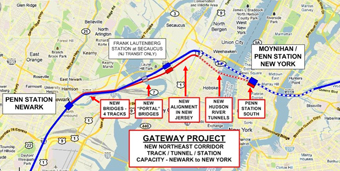 Amtrak’s Gateway Program (center illustration) is a proposal to build a high-speed rail corridor to alleviate the bottleneck along the NEC between Newark, N.J., and New York City. The project would add 25 train slots during peak periods to the current system used by Amtrak and New Jersey Transit. The planned right-of-way would parallel the current “High Line” between Newark Penn Station and New York Penn Station. It includes new bridges in the New Jersey Meadowlands to replace and expand existing Portal Bridge, the two Gateway Tunnels under the Hudson Palisades and the Hudson River, conversion of the James A. Farley Post Office Building (which is directly across 8th Avenue from the existing NY Penn/Madison Square Garden complex) into a new Amtrak station, and a terminal annex to NY Penn (“Penn Station South”).

Amtrak, joined by Sen. Lautenberg, unveiled the project Feb. 7, 2011 at a press conference in Newark, N.J., after New Jersey Governor Chris Christie in 2010 cancelled the Access to the Region’s Core (ARC) project, which would have constructed two new Hudson River rail tunnels—THE (Trans-Hudson Express) Tunnel—and a new, stub-end deep-tunnel NJT station adjacent to the existing NY Penn. ARC, in its final, widely criticized iteration, had no Amtrak participation and no connectivity with the existing NY Penn. Engineering studies at the time determined that structural interferences made a direct connection to NY Penn unfeasible. The Gateway Program is estimated at about $15 billion, with a 2025 completion date. 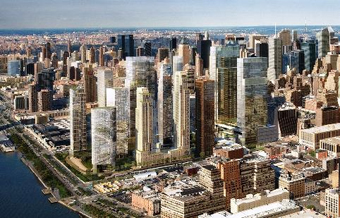 The centerpiece of the Hudson Yards Redevelopment Project is Hudson Yards (pictured, bottom), a proposed mixed-use real estate development by Related Companies. According to the master plan, created by Kohn Pedersen Fox Associates, Hudson Yards is expected to consist of 16 skyscrapers containing close to 13 million square feet of new office, residential, and retail space. Among its components will be six million square feet of commercial office space, a 750,000-square-foot retail center with two levels of restaurants, cafes, markets and bars, a hotel, a cultural space, about 5,000 residences, a 750-seat school, and 14 acres of public open space. Hudson Yards officially broke ground on Dec. 4, 2012. The first tower, an 895-foot-tall office building in the southeast corner of the site anchored by Coach Inc., is expected to be complete in 2015.

“When Sandy flooded our tunnels, it exposed a fatal flaw in our already maxed-out transit infrastructure and demonstrated beyond a doubt we needed a new flood-resistant rail tunnel into and out of Manhattan,” Schumer said. “This project secures the future of rail for New York City and all of the Northeast Corridor, making our rail infrastructure more efficient and much more flood resistant from storms like Sandy. It is the first step of a long-term mitigation investment in New York. I am pleased that Secretary LaHood will award this much-needed funding to preserve a path for new rail tunnels into Manhattan.”

“The Gateway Program is the most important transportation project in our region, and this federal funding clears a hurdle that threatened the possibility of a new rail tunnel under the Hudson River. Gateway will create thousands of jobs, drive economic growth, and help us meet the urgent needs of a growing population that demands more, reliable rail options,” said Lautenberg. “Sandy showed us firsthand why our transportation systems must be able to withstand flooding and natural disasters, and the Gateway Project will be an important part of making our region more resilient. We’ll keep working hard to invest in transit so that the people and economies of New Jersey and New York remain inextricably linked.”

“Hurricane Sandy exposed the risks of relying solely on a system of century-old tunnels for rail access into New York City,” said LaHood. “We were fortunate that these tunnels were not destroyed during the hurricane, and providing Amtrak with funds to preserve its ability to build [additional tunnels] will provide much-needed resiliency to the Northeast Corridor in case of future disasters.”

“The federal funding makes it possible for Amtrak to begin construction this summer on a project to preserve a pathway for two new rail tunnels into New York that are critical for the future mobility and economic growth of the entire Northeast region,” said Amtrak Board of Directors Chairman Tony Coscia. “This project to build an 800-foot concrete casing through the Hudson Yards commercial development property will protect the only viable right-of-way for connecting the tunnels to the existing tracks and platforms at Penn Station, New York.   The new tunnels are one element of the Amtrak Gateway Program to increase rail infrastructure capacity between Newark, N.J., and Penn Station, New York. By eliminating this bottleneck into New York City, which today is the Northeast Corridor’s most congested segment, the Gateway Program will increase resiliency against severe weather events, add redundancy and reliability for Amtrak and New Jersey Transit’s shared operations, and provide additional capacity for the future increases in commuter, intercity, and high speed rail service.”