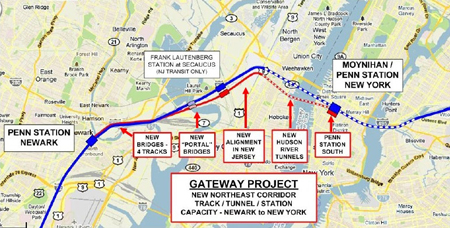 A new engineering report details damage to the Amtrak-owned Hudson (“North”) River and East River tunnels following Superstorm Sandy and recommends a phased process to take individual tubes out of service for extended periods to perform the work required “to maintain reliability of train movements in and out of New York City” and Penn Station New York. The tunnels (two under the Hudson, four under the East River) were built by the Pennsylvania Railroad and opened in 1910.

“The report underscores the urgency to advance the Gateway Program, which includes building new, two-track tunnel capacity under the Hudson River that can help alleviate service impacts to the region as the needed work on the tunnels is under way,” Amtrak said. “Superstorm Sandy created a storm surge that resulted in sea water inundating both tubes of the Hudson River tunnel and two of the four tubes of the East River tunnel. The report found no evidence that the tunnel linings themselves are unsound, but it did find that chlorides and sulfates caused, and are continuing to cause, significant damage to key tunnel components such as the bench walls and track systems as well as the signal, electrical, and mechanical systems.”

The tunnels are safe for passenger train operations, Amtrak emphasized. “Amtrak has a robust tunnel inspection program, conducts regular maintenance work and will be performing interim work as needed,” the railroad said. “However, a permanent fix is required soon so that the tunnels remain available for long-term use by the traveling public.”

Amtrak commissioned HNTB for the report.

Amtrak said its own engineers are working with consultants on designs to rehabilitate the two damaged tubes of the East River tunnel and will coordinate with New Jersey Transit and the New York MTA’s Long Island Rail Road to minimize impacts to train service and other projects. With four tunnels underneath the East River, potential capacity constraints for both Amtrak and the LIRR are less severe, possibly forcing service reductions under 25% of normal operations,

“The rehabilitation work for both damaged tubes of the Hudson River tunnel cannot reasonably begin until after the new Gateway tunnel is built and operating,” Amtrak said. “This will allow rail traffic to shift to the new tunnel and avoid major service impacts. Amtrak is advancing the Gateway Program and seeking to begin as soon as possible the environmental review process. Through the design process and additional planning work, Amtrak will develop a schedule for performing the work recommended by this report. We will ensure the safety of all passengers and balance efforts to minimize service impacts while also advancing as soon as possible the permanent fix needed for the long-term reliability of the tunnels for train service to Penn Station New York.”

“Public awareness of the critical needs of the tunnels is important to build regional understanding of what must be done to provide current and future train service levels into New York,” said Amtrak Chairman Tony Coscia. “The Northeast region needs to make the Gateway Program a priority, and we must get about the business of moving it forward as fast as we can.”

Closure of even one of the two Hudson River tunnels would reduce NEC capacity by nearly 75% (and not just by half), Amtrak Vice President for Northeast Corridor Infrastructure and Investment Development Stephen Gardner told The New York Times. Beyond the impact to Amtrak, such a move would nearly decimate New Jersey Transit operations on NJT’s Newark Division, for which the NEC is the main spine. NJT “coordination” efforts likely would involve redirecting as much New York-bound traffic as possible onto its Hoboken Division, where New York-bound travelers would transfer to PATH rapid transit service at Hoboken Terminal. As well, NJT Newark Division trains could terminate at Newark-Penn Station, where riders also could access PATH for trips to New York.

“A day of reckoning was bound to come,” said Lester W. Wolff, director of the New Jersey Association of Railroad Passengers (NJ-ARP), a grassroots advocacy group. “NJ-ARP has been advocating for additional trans-Hudson capacity for two decades and, unfortunately, our elected officials and, in some cases, parochial politics have prevented anything from being built. The urgently needed repairs to our now damaged infrastructure will have a major economic impact to the entire region of the Northeast Corridor, not just New York and New Jersey.”

Wolff also observed that “trans-Hudson ridership is increasing every year. NJ Transit just last week issued a rail fleet plan to utilize MLVs [multi-level vehicles]as it is the only way to cram more seats into their allotted Hudson-River slots until such time as new tunnels are built.”