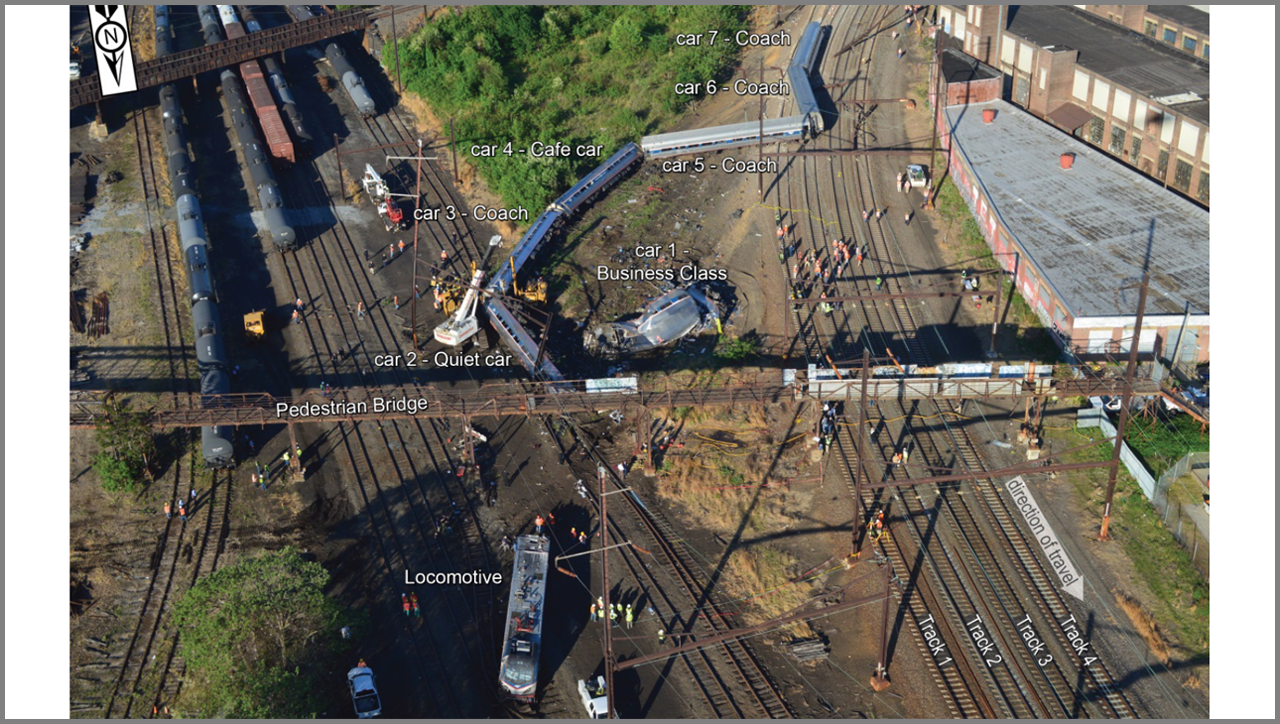 Amtrak Northeast Regional Train 188 derailed at Frankford Junction in Philadelphia on the Northeast Corridor, shortly after 9:00 p.m. on Tuesday, May 12, 2015. (Accident scene image courtesy of NTSB)

Ex-Amtrak engineer Brandon Bostian was acquitted on March 4 of all charges related to the May 12, 2015 derailment of Northeast Regional Train 188 in Philadelphia that killed eight and injured more than 200.

He had been charged with eight counts of involuntary manslaughter, one count of causing a catastrophe, and 200-plus counts of reckless endangerment, according to CBS 3 in Philadelphia. “Bostian could have been sentenced to life in prison if he had been found guilty. But the jury decided to acquit,” the news outlet reported.

“About 9:21 p.m. eastern daylight time on May 12, 2015, eastbound Amtrak … passenger train 188 derailed at milepost 81.62 in Philadelphia, Pennsylvania,” according to the National Transportation Safety Board (NTSB) report. “The [Washington-to-New York] train had just entered the Frankford Junction curve—where the speed is restricted to 50 mph—at 106 mph. It was dark and 81 [degrees] F with no precipitation; visibility was 10 miles. As the train entered the curve, [Bostian] the locomotive engineer applied the emergency brakes. Seconds later, the train—one locomotive and seven passenger cars—derailed. There were 245 passengers, 5 on-duty Amtrak employees, and 3 off-duty Amtrak employees on board. Eight passengers were killed, and 185 others were transported to area hospitals. … The National Transportation Safety board (NTSB) found that the Amtrak engineer accelerated his train to a high rate of speed in a manner consistent with how he habitually manipulated the controls when accelerating to a target speed, suggesting that he was actively operating the train rather than incapacitated moments before the accident. However, he accelerated to 106 mph without slowing the train for the curve at Frankford Junction, where the speed was restricted to 50 mph. After evaluating the circumstances of the accident, the NTSB found that the most likely reason the engineer failed to slow for the curve was he believed he was beyond the curve where the authorized speed was 110 mph, because of his loss of situational awareness. He lost his situational awareness because his attention was diverted to an emergency situation with a nearby Southeastern Pennsylvania Transportation Authority (SEPTA) train that had made an emergency stop after being struck by a projectile. This type of situation could be addressed by better crewmember training that focuses on preventative strategies for situations that could divert crewmember attention. … In the accident area, positive train control had not yet been implemented at the time of the accident, but it has since been implemented. The NTSB found that the accident could have been avoided if positive train control or another control system had been in place to enforce the permanent speed restriction of 50 mph at the Franklin Junction curve.”

“Brandon made a mistake because of the distraction, and that’s not a crime,” Bostian’s lawyer, Brian McMonagle, said on March 4, according to The New York Times. “I explained to the jury that good people make honest mistakes every day, and it’s not criminal conduct.”

The Times went on to report that “Josh Shapiro, Pennsylvania’s attorney general, said in a statement on Friday [March 4] that his office respected the jury’s verdict.

“‘There is no question that the excessive speed of the train that the defendant operated resulted in death and injury to his passengers,’ the statement said. ‘Our goal throughout this long legal process was to seek justice for each and every victim, and help bring victims’ families and their loved ones closure.’”

The Times noted that Amtrak in October 2016 “agreed to pay up to $265 million to victims and their families in one of the largest settlements related to a train derailment in the United States.

“But the Philadelphia district attorney declined to charge Mr. Bostian in May 2017, saying he did not believe there was enough evidence to prove that Mr. Bostian had consciously disregarded a ‘substantial and unjustifiable risk.’

“Mr. Shapiro charged Mr. Bostian later that month, but only after the victims’ families invoked a state law that forced the authorities to act. The charges were then dismissed twice.

“In the first ruling, in September 2017, Judge Thomas F. Gehret of Philadelphia Municipal Court concluded that Mr. Bostian bore no criminal responsibility for the derailment. The judge said the episode appeared to have been an accident.

“In the second case, in July 2019, Judge Barbara McDermott of the Philadelphia Court of Common Pleas ruled that the mistakes Mr. Bostian had made did not constitute a crime. ‘The law recognizes we’re all human,’ the judge said, according to The Associated Press.

“But in May 2020, Judge Victor P. Stabile of Pennsylvania Superior Court found that Judge McDermott had improperly considered evidence that should have been considered at trial and sent the case back to a trial court for the case to be heard by a jury.”

Frankford Junction was the site of a similar accident in 1943. On Sept. 6 (Labor Day) of that year, the Pennsylvania Railroad’s Congressional Limited, with 16 cars and 541 passengers, derailed when an overheated journal box on an older dining car that had been added to the consist burned off, causing a wheelset failure. The wreck resulted in 79 deaths and 117 injuries.

Frankford Junction is an interlocking where the four-track NEC connects with New Jersey Transit’s two-track Atlantic City Line, and with Conrail.