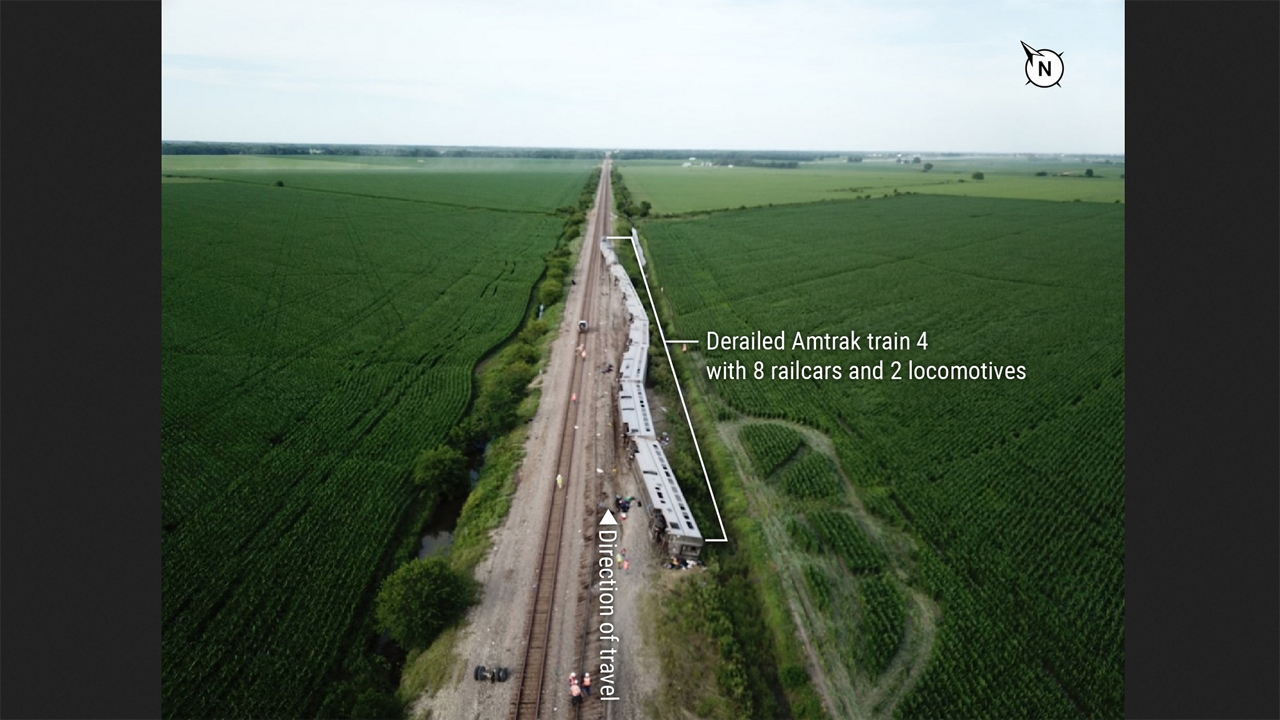 The National Transportation Safety Board (NTSB) on July 21 released a preliminary report for its ongoing investigation of the June 27 grade crossing collision and derailment between Amtrak’s Southwest Chief train 4 and a dump truck near Mendon, Mo.

Three train passengers and the truck driver died as a result of the accident; 150 people were taken to 10 area hospitals for treatment of injuries ranging “from minor to serious in nature,” the Missouri State Highway Patrol reported on June 28. NTSB Chair Jennifer Homendy in a June 28 media briefing said the agency was focused on the grade crossing, the approach to the grade crossing and survivability after an accident.

The NTSB dispatched a 16-member “go-team” to investigate the derailment. The Federal Railroad Administration (FRA) also dispatched personnel to the scene. Other parties to the investigation are BNSF, Amtrak, Missouri Department of Transportation, Missouri State Highway Patrol, MS Contracting LLC (the trucking company), and the SMART and BLET unions.

Homendy told the media on June 29 that the NTSB would release its preliminary report in two weeks. That report, she said, would include factual information—not analysis.

Railway Age reproduces the newly published report, in full, below:

​“This is preliminary information, subject to change, and may contain errors. Any errors in this report will be corrected when the final report has been completed. Release Date: July 21, 2022

​“On June 27, 2022, about 12:42 p.m. local time, eastbound National Railroad Passenger Corporation (Amtrak) train 4 (also known as the Southwest Chief), carrying 270 passengers and 12 crew, derailed in Mendon, Missouri after colliding with a 2007 Kenworth W900B dump truck that was fouling a highway railroad grade crossing. (1)  (See figure [pictured, top].) Three train passengers and the truck driver died, and multiple passengers and crew were transported to local hospitals with injuries. Damage was estimated by Amtrak and BNSF Railway (BNSF) to be about $4 million.

​​“Amtrak train 4, traveling from Los Angeles, California, to Chicago, Illinois, consisted of two locomotives and eight railcars. The collision with the fully loaded dump truck occurred at milepost 363.8 on the BNSF Marceline Subdivision near a rural passive highway railroad grade crossing on County Road 113, also known as Porsche Prairie Avenue. The highway railroad grade crossing was equipped with crossbucks, and a stop sign on the right side of Porsche Prairie Avenue as the dump truck driver approached from the south. All locomotives and railcars derailed with seven of the railcars coming to a rest on their sides. The dump truck received heavy damage and came to rest in a ditch northeast of the rail crossing adjacent to the road.

​“In the vicinity of the accident area, BNSF authorizes train movements with a traffic control system. Train movements are coordinated by a BNSF train dispatcher located at the Dispatch Center in Fort Worth, Texas. Train movements on the Marceline Subdivision are governed by operating rules, special instructions, timetable instructions, and the signal indications of the traffic control system and supplemented with an overlaid positive train control (PTC) system. The maximum allowable speed on this section of track was 90 mph for passenger trains. The PTC system was enabled and operating at the time of the collision. Preliminary review of the data from the leading locomotive’s event recorder showed that train 4 was traveling 89 mph when its emergency brakes were activated. The weather was clear with no precipitation at the time of the accident. ​​

​“Parties to this investigation include the Federal Railroad Administration, Amtrak, BNSF, the International Association of Sheet Metal, Air, Rail and Transportation Workers – Transportation Division, the Brotherhood of Locomotive Engineers and Trainmen, Missouri State Highway Patrol, and Missouri Department of Transportation.​​​​​

​​ ​“1 (a) All times in this document are local time unless otherwise noted. (b) Amtrak is a passenger railroad service that provides medium- and long-distance intercity passenger rail service in the contiguous United States and to nine cities in Canada. (c) Fouling refers to being in proximity to a track such that the individual or equipment could be struck by a moving train.