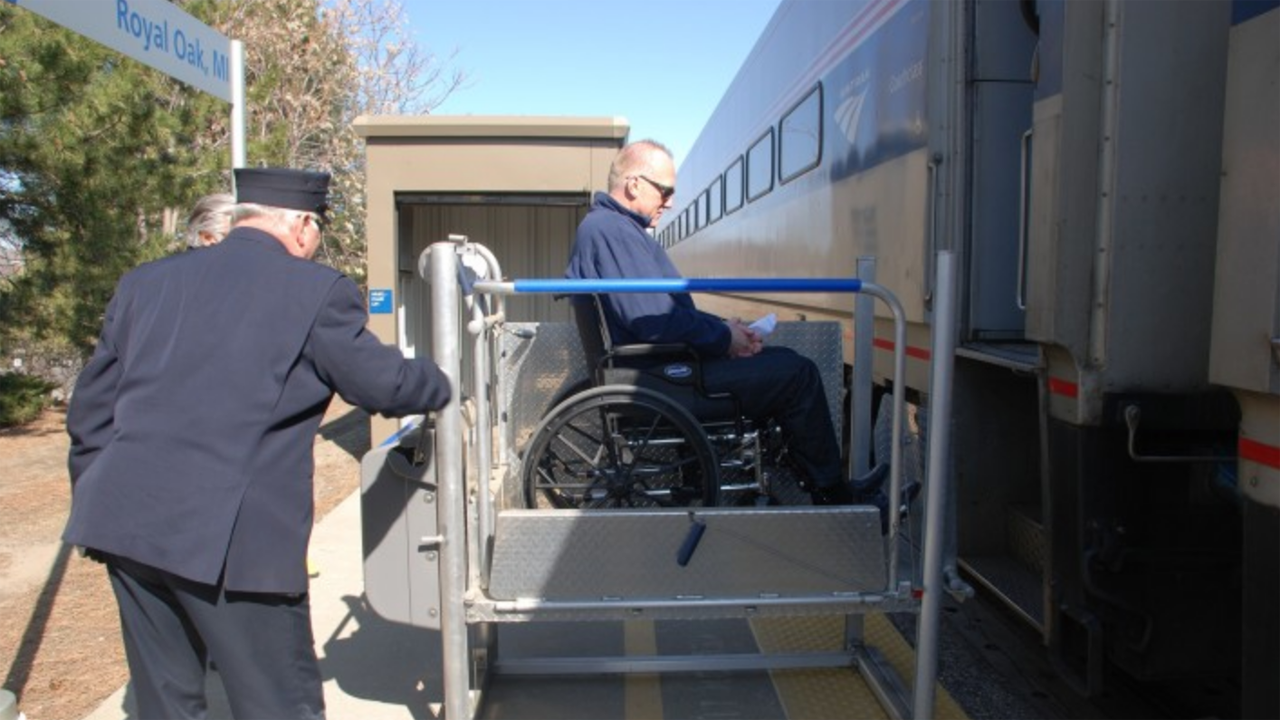 Over the past 12 years, Amtrak has brought 74 of 386 stations into ADA compliance.

Better planning and coordination could help Amtrak complete an “aggressive” $1.2 billion plan to bring its remaining stations into Americans with Disabilities Act (ADA) compliance by FY 2027, according to a report from the railroad’s Office of Inspector General (OIG).

The Sept. 2, 2021 OIG report (download below) covers an audit of Amtrak’s ADA program. The audit focused on the company’s current program management structure, plans to achieve compliance, and program spending from FY 2015 through FY 2020; it was conducted from September 2020 through August 2021.

The ADA, which became law in 1990, required intercity rail facilities—including station structures, platforms and parking—to be accessible to persons with disabilities by July 26, 2010. Amtrak missed the deadline.

“We found that the company has clearer lines of authority, responsibility and accountability for the Americans with Disabilities Act (ADA) program, and that its reorganization, based on our prior recommendations has helped it bring 36 more stations into compliance since October 2017 through April 2021,” the OIG report said.

Now, 312 stations remain, where Amtrak has a sole or shared responsibility for compliance. Its new plan for these stations represents an output that is more than four times the number of stations it has completed since 2009, and about three times the amount it has spent in the previous six years, according to the OIG report.

Amtrak cannot “reasonably expect to execute its aggressive plan to achieve compliance at the remaining 312 stations over the next six years until it develops the requisite planning to achieve its timeline,” the OIG report said. “Although the company appears fully committed to achieving ADA compliance, it acknowledges that it currently does not have enough staff to manage additional projects or monitor the contractors it hired to support them.” This led OIG auditors to question $81 million in costs associated with the contractors’ work from fiscal year 2015 through fiscal year 2020.

The OIG report also found that “achieving cooperation with third parties at the remaining noncompliant stations remains a significant program risk.” As of December 2020, discussions with third parties were at a stalemate for at least 13 stations, which has increased costs and delayed projects, the report said. Work at a station in Elko, Nev., for example, has stalled for more than 10 years due to such an impasse. While Amtrak could ask the U.S. Department of Justice to intervene and enforce federal mandates requiring a third party to cooperate in addressing ADA deficiencies, it does not have staff guidance in place to take such a step, which could help reduce additional delays, the report noted.

Finally, the OIG report found that Amtrak’s Information Technology department and its ADA Stations team “did not coordinate to ensure that passenger information display systems (PIDS) installations were compliant, and they did not effectively coordinate to ensure that they were tracking the same number of stations at which the company is responsible for PIDS, which led to inconsistent reporting.”

OIG recommended in its report that Amtrak:

1. “Assess the current and future resources the ADA program needs to implement its timeline, including resources from other groups, and identify actions to address any shortfalls.

3. “Develop guidance that institutionalizes steps program staff can take when they reach a stalemate with a third party.

4. “Take and document actions to ensure the ADA Stations team and Information Technology department are coordinating so installations are compliant and reporting is consistent and accurate.”

Executive Vice President/Planning and Strategy Dennis Newman, in commenting on a draft OIG report, “agreed with our recommendations and identified specific actions the company plans to take by December 31, 2021 to implement them. These include documenting a resource plan and establishing steps program staff can take when faced with a stalemate over station repair work,” the OIG report said.