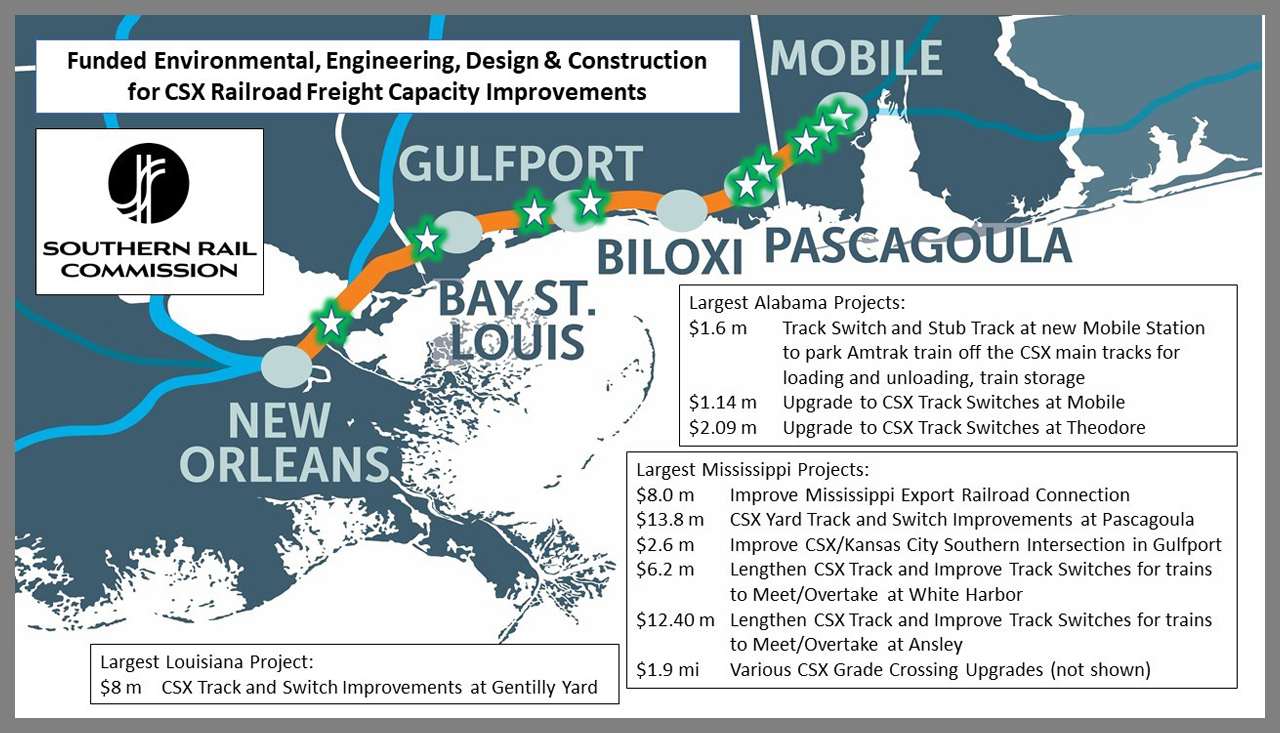 Amtrak has confirmed its intention to begin service between New Orleans, La., and Mobile, Ala., in 2022. But a stakeholder agreement has not yet been reached.

There is a good deal of controversy swirling around proposed new intercity passenger rail service between New Orleans, La., and Mobile, Ala., involving Amtrak, two Class I railroads, a multi-state agency and a major Alabama port.

Though Amtrak confirmed its intention to begin the service in 2022, an actual start date is far from being finalized. The plan calls for Amtrak to operate two daily round-trips—currently dubbed Gulf Coast—also including four stops in Mississippi (Bay St. Louis, Gulfport, Biloxi and Pascagoula). The service would be separate and distinct from the Sunset Limited, whose service from New Orleans to Jacksonville, Fla., was suspended after Hurricane Katrina in 2005; there are no plans at this time to reinstitute that service.

No agreement has been reached by Amtrak and CSX—which owns most of the tracks upon which the new service would operate—and Norfolk Southern. The three began an Amtrak-funded study last year using Berkeley Simulation Software’s Rail Traffic Controller modeling program to determine passenger rail’s impact to existing freight traffic.

The parties’ one-year agreement expired in January, according to Amtrak spokesman Marc Magliari. “Something that should have taken seven months was far from completion after a year,” he said in a statement to Railway Age. “In fact, discussions have been under way for five years. There was no sign of any conclusion in sight.”

Magliari said that Amtrak has notified the host freight railroads of its intention to start service, and asked them “where they believe there are more issues. We safely and successfully operate together elsewhere in the United States, with dependable freight service coexisting with reliable and relevant Amtrak service. That’s what the Gulf Coast deserves, too.”

A source close to the matter with whom Railway Age spoke speculated that the Port of Mobile may have leaked information to local news media over concerns that the new passenger service would impact freight rail service to the port provided by CSX, and perhaps by other freight railroads in the region.

CSX spokesperson Cindy Schild released this statement to Railway Age: “From the onset, CSX prioritized this Amtrak Gulf Coast study, treating each step as expeditiously as possible. Any CSX-requested modifications to study parameters were to ensure the model was compliant with federal law. CSX and its customers strongly support the completion of this study. Not only are we committed to seeing its completion, but the STB [Surface Transportation Board] has a statutory obligation to determine if a new passenger service unreasonably interferes with freight operations. It is critical that this study and the full infrastructure impact assessment is completed.”

As such, the proposed service may serve as a test case for how the STB handles future intercity passenger rail proposals involving Amtrak, state entities and host freight railroads, when reaching an agreement proves problematic.

Norfolk Southern spokesman Jeff DeGraff mirrored CSX’s position in a statement to Railway Age: “There is an established process for introducing new passenger rail service on freight rail lines recognized by both the freight and passenger railroad industries. It involves identifying, through a data-driven study, what infrastructure is necessary to ensure that the new passenger service is transparent to freight operations and doesn’t negatively impact the freight rail customers. The public entities sponsoring the service finance the infrastructure construction prior [to] passenger service being introduced. It is a well-instituted process, one that history has shown to work. Norfolk Southern welcomes the prospect that this process will be revived and completed in the proposed Mobile-New Orleans service.”

When or if the study will continue is unknown.

In July 2017, a Gulf Coast service restoration study, administered by the Federal Railroad Administration’s Gulf Coast Working Group and conducted by HDR, was completed. The study “showed where freight railroad improvements are needed,” Amtrak’s Magliari said. “Since 2019, the Southern Rail Commission has had $33 million in federal grants to pay for them.”

The Southern Rail Commission (SRC)—a passenger rail agency led by governor-appointed commissioners in Alabama, Louisiana and Mississippi—was part of the 2017 study’s working group. It would contract with Amtrak for the new Mobile-New Orleans service.

SRC is cautiously optimistic about Amtrak’s intention to start running trains again. “Having worked tirelessly with federal, state and local officials on this project, we are thrilled that a departure time is in sight for passenger rail service on the Gulf Coast,” SRC Chairman Wiley Blankenship said. “While additional work needs to be done to address the concerns of the Port of Mobile before service can start, Amtrak service will provide a much-needed shot in the arm for local economies still recovering from the COVID-19 pandemic and multiple extreme weather events.”

SRC said it has secured multiple federal grants to enable Amtrak Gulf Coast trains to start operating next year, “including full federal support of operating costs for the first year of service and continued federal support in the second and third year ($11.2 million), and a federal grant and local matching funds for improvements to area railroad infrastructure for passenger and freight service ($66 million) to cities along the route for planning, upgrading, and constructing their rail stations ($2 million).”

Amtrak’s Magliari told Railway Age that there are several examples of successful passenger rail launches done in cooperation with state entities, many of which included follow-on improvements:

“The Amtrak Heartland Flyer, Trains 821 and 822, operates a daily round-trip between Fort Worth and Oklahoma City, with the costs beyond the farebox shared by Amtrak with the states of Texas and Oklahoma. This service began June 14, 1999, as the first Amtrak service between the cities in 20 years, following the 1979 discontinuance of Amtrak Lone Star ­Trains 15 and 16, which had operated between Chicago and Houston.

“That is similar to where we are in Mobile, which has been without service since Amtrak Sunset Limited Trains 1 and 2 were suspended east of New Orleans following Katrina. More station work was needed in the Flyer’s case, because it was discontinued instead of suspended.

“Another similarity between the proposed Gulf Coast service and the Heartland Flyer was its origination with special federal funding, which then transitioned to Amtrak sharing the costs with the states without a direct federal partner. That is the plan for the Gulf Coast.

“During the first few years of the Heartland Flyer schedule, in partnership with BNSF as the track owner, the schedule was shortened as projects were completed. That’s also not unusual, as we’ve done projects in other states to shorten schedules by making improvements to the railroad infrastructure with federal grant funds.

“As examples, later this year we expect to operate our Illinois DOT-supported Lincoln Service trains and Texas Eagle at speeds up to 90 mph between Chicago and St. Louis and to increase the miles of 110-mph speeds in Western and Central Michigan on two of our three routes we operate for the Michigan DOT .

“Likewise, in Missouri, that state’s DOT and Amtrak have worked with Union Pacific to improve reliability and schedules since 2009 by winning federal grants to build double-track bridges and add siding capacity on the Missouri River Runner route between Kansas City and St Louis, a service we’ve operated since 1979—also following the discontinuance of a longer distance Amtrak train, the Kansas City-New York Amtrak National Limited, Trains 30 and 31.”

In related developments, Amtrak CEO William J. Flynn outlined the railroad’s top five priorities to ensure its recovery from the pandemic and expand service this year in a Jan. 22 letter to the 117th Congress. 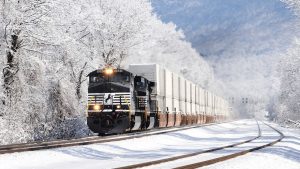