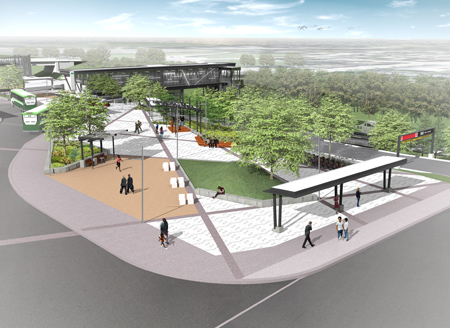 Four daily weekday trains will use the station; two into Toronto during the morning rush hour, two returning to Hamilton in the afternoon. It supplements rather than replaces the service provided from the GO Centre located in the former Toronto, Hamilton & Buffalo Railway station on Hunter Street, which offers four weekday trains in each direction, as well as GO bus service, and that provided by other intercity operators.

Significant service expansion at Hunter Street was limited by the half-mile, single-track tunnel immediately west of the station; enlargement, at Metrolinx expense (the trackage, including the tunnel, is owned by Canadian Pacific Railway) would have been extremely expensive. In addition, GO Transit plans to expand rail service eastward to the town of Stoney Creek, immediately east of Hamilton proper, on the CN line. Land has already been bought for a station, which will be close to the Toronto-Fort Erie (across from Buffalo) Queen Elizabeth Way (QEW) highway. For the past several years, GO has been running Friday-Saturday-Sunday-holiday trains between Toronto and Niagara Falls, Ont., on the Lakeshore West Line from early July to early September. The Stoney Creek service is expected to commence by 2019. 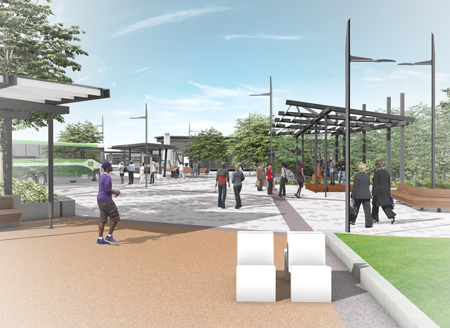 The Niagara Falls trains, as well as the Maple Leaf (VIA service on this route has ended) will not, however, be able to stop at West Harbour until it is fully completed, which will not be achieved for at least another year. Although one platform and the station building were rushed to completion in time for the additional service provided during the portion of the July 2015 Pan American Games being held in Hamilton, much work remains to be done. This includes the second platform and second entrance, as well as new trackwork and signaling for through trains. A 300-car parking facility, passenger pickup/dropoff, bus loop and pedestrian walkways also remain to be finished.

The West Harbour station is located immediately west of the former James Street Station, opened by Canadian National Railways in 1931 and from which GO and VIA departed in the early 1990s; the former for the GO Centre, the latter for the new Aldershot Station situated about three miles eastward in the adjoining city of Burlington. West Harbour is situated in an older residential area approximately one mile north of the downtown area, to which it is linked by city buses.