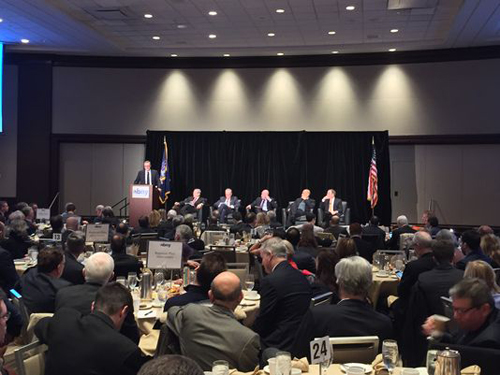 Legislators and transportation officials from New Jersey and New York and Amtrak say the Gateway Program to rebuild aging infrastructure and expand capacity on the Northeast Corridor in the New York Metropolitan Area “is on track and all the major players are on board,” according to a report from NJTV News. But questions remain as to whether the incoming Trump Administration will be on board.

“This will be the first test of the Trump Administration in its commitment to New York City and its commitment to infrastructure,” said Sen. Chuck Schumer (D-N.Y.) at a Dec. 13 public forum. “I’ve talked to the President-Elect about both. He’s called me and he says he wants to do a major infrastructure bill of [about] a trillion dollars. That’s great. It needs to be done in the right way. If it’s just tax breaks for developers, this project wouldn’t get built, and so many others would not get built.”

“Anybody who runs for office who’s talking about a massive infrastructure project, this has sort of been laid up for him, better than any other major project, said Sen. Cory Booker (D-N.J.). “If you just look at the cost-benefit analysis alone, just the economic case, there’s no better dollar you can invest in America right now in terms of the return on that investment that you’re going to get. If you want to grow this nation’s GDP like the President-Elect says he wants to do, get up to 3%, 4%, this is the region that’s going to help contribute to that. And in order to make that happen you’ve got to prime the pump and put the infrastructure in place so that we can explode in our growth.”

Trans-Hudson ridership is at capacity and expected to double by 2030. The existing North (Hudson) River tunnels can handle a maximum of 24 trains per hour, and platform capacity at PSNY is limited, with peak-hour trains taking a long time to load and unload. Trains are often standing-room-only. Gateway includes two new tunnels and PSNY expanded to include transformation of the Farley Post Office Building, which sits just to the west of the PSNY/Madison Square Garden complex, into the Daniel P. Moynihan Station. (The New York Regional Plan Association’s 2005 project scope can be downloaded at the link below.)

Gateway also includes replacing the century-old, two-track swing-span Portal Bridge over the Hackensack River in the New Jersey Meadowlands on the NEC. NJ Transit and Amtrak have completed final design and a federal environmental review to replace the bridge with a fixed-span structure. The existing Portal Bridge hosts about 450 trains per day and is “a major bottleneck and source of delay of train traffic; the aging mechanical components sometimes malfunction while opening and closing for maritime traffic. The two-track replacement bridge, Portal North Bridge, is designed as a high-level, fixed-span bridge, eliminating the movable components and risk of malfunction.”

Gateway (download a map from the link below) is the second attempt at such a massive project. New Jersey Gov. Chris Christie cancelled the first attempt, ARC Tunnel—also called the Trans Hudson Express Tunnel (THE Tunnel) or the Mass Transit Tunnel—in October 2010, citing possible cost overruns and New Jersey’s shortage of funds. $600 million had already been spent on the project. Critics of the ARC Tunnel dubbed the project “the tunnel to Macy’s basement,” in reference to its terminus under 34th Street in Manhattan, but also to the fact that, contrary to how it was originally scoped out, it would not connect with the existing Penn Station New York, thus offering no through-train service and providing no benefit for Amtrak or the New York MTA, which has been considering Metro-North service to PSNY with a New Jersey train storage facility.

“At its busiest point between New York and New Jersey, the Northeast Corridor consists of only two main tracks,” said Amtrak Board Chairman Anthony Coscia. “Those tracks pass over 106-year-old, often malfunctioning, Portal Bridge, through a century old and significantly [Superstorm] Sandy damaged Hudson River tunnel and into an overcrowded and constrained Penn Station.”

“I think they’ve recognized that to make America great again, they’ve got to make our infrastructure great again,” said former PANY&NJ Vice Chair Scott Rechler. “I think there’s a recognition to Sen. Schumer’s point that it’s not all the sexy stuff. When you look at our infrastructure, take the Port Authority’s budget, take the MTA budget, more than 50% of those $30 billion budgets is repairing what is broken, not doing what is new. If they think about that trillion dollars, it’s probably half and half. There’s got to be a real focus on politics not trumping professionalism, and [on] waste. We as a country and we in this region have seen too many projects started by government agencies [where] the funding goes into black holes and the delays occur and they don’t get done.”