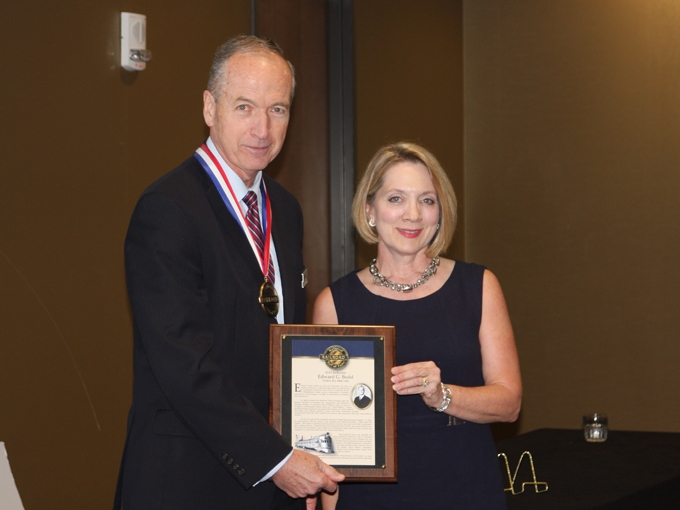 The National Railroad Hall of Fame has inducted Edward Gowen Budd, founder of the Edward G. Budd Manufacturing Co. in Philadelphia in 1912. Bombardier Transportation, which acquired the Budd Co.’s passenger railcar designs and related assets of its mass transit equipment division in 1987, accepted the award on Edward Budd’s behalf during an Oct. 27, 2015 ceremony at St. Louis Union Station.

The Budd Co. made history in 1934 when it introduced the nation’s first stainless-steel, diesel-powered streamliner, the Pioneer Zephyr. “The Zephyr’s stainless-steel fluted skirt structure was made with Budd’s proprietary shot-welding process, a breakthrough that inaugurated the modern age of metal fabrication,” said Hall of Fame Chair Jay Matson. “The streamliner’s light weight and aerodynamic shape improved fuel economy and enabled it to travel faster than any train had ever traveled. Budd’s pioneering advances in manufacturing techniques transformed the passenger and commuter trains of the world.”

“We are honored to accept this award on Edward Budd’s behalf,” said Bombardier Vice President Business Development and Sales, U.S., Robert Furniss. “Bombardier appreciates his significant contributions to the passenger railcar industry and is proud to be carrying on his legacy as an innovator and leader in modern mobility.”

The National Railroad Hall of Fame was established in 2003 when resolutions of the U.S. Congress recognized the organization and designated its home in Galesburg, Ill.