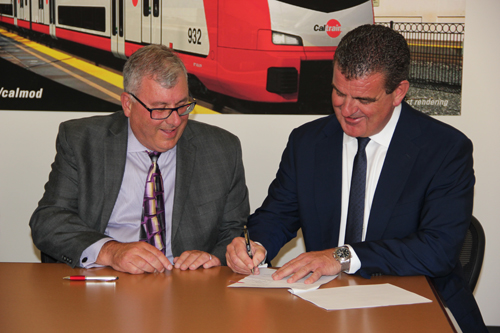 Spuhler must have been elated to land a contract worth more than a half-billion dollars and could have felt like literally kissing Hartnett, so the type of vehicle Stadler US will be building for Caltrain—the lightweight, six-car, bilevel, electric multiple-unit (EMU) KISS (Komfortabler Innovativer Spurtstarker S-Bahn-Zug, the German acronym for “Comfortable Innovative Speedy Suburban Train)—is appropriately named.

(Editor’s note: Caltrain decided to purchase the KISS, but perhaps flirted with the prospect of acquiring Stadler’s best-selling FLIRT—Flinker Leichter Innovativer Regional Triebzug, or “Fast Light Innovative Regional Train”—1,300 units of which have been sold in 17 countries. The KISS vehicle (the name is an acronym of the German for comfortable innovative speedy suburban train) is also very popular, as 242 trainsets comprising 1,145 cars have been sold in eight countries, nine with the Caltrain contract)

Stadler’s Caltrain contract includes an option for an additional 96 cars worth $345 million. It marks the first time that Stadler has sold KISS trainsets in the U.S., and is also its seventh and largest U.S. contract.

KISS EMUs measure 515 feet, 3 inches (157.1 meters) in length. They will connect San Francisco with San Jose in the Silicon Valley. “Bilevel EMUs, with their high performance and passenger capacity, will help to provide a better service to the rapidly growing ridership by allowing Caltrain to offer faster and more frequent connections,” Stadler US said. The replacement of the existing heavy-steel-construction diesel fleet with state-of-the art lightweight aluminum EMUs will also significantly decrease greenhouse gas and noise emissions.”

“The Caltrain Modernization Program represents the single-most transformative project in Caltrain’s 150-year history,” said Jim Hartnett. “We sought out partners that would help us deliver a world-class product that will bring Caltrain service into the 21st century. We are thrilled to be working with a company with Stadler’s commitment to providing a high-performance product and the amenities that future generations of Caltrain riders will be able to enjoy.”

Said Peter Spuhler, “I am very proud that we have the opportunity to build state-of-the-art double-decker trainsets for the U.S. for the first time. The KISS train is a high-tech product, perfectly suited for the Silicon Valley. Stadler EMUs are weight-optimized with their proven lightweight aluminum construction. And we certainly hope to further strengthen our reputation as an innovation leader in the U.S. with this contract and to be successful in future tenders. These high-performance EMUs are particularly attractive, thanks to their proven design, low life-cycle costs, and reliability.”

The KISS trainset is fully compliant with Buy America Act requirements. It can operate in mixed traffic, “which results in a high level of passive safety,” Stadler said. “Specific Stadler-designed trucks have a built-in air suspension to allow smooth running with exceptionally low vibration and noise levels. The standard-gauge trains have a maximum operating speed of 110 mph (177 kph). The six-car trains are extendable to seven-car or eight-car units, providing the same swift performance with significantly increased transport capacity.”

Stadler will deliver the first KISS to Caltrain in August 2019. Trainsets are expected to begin entering revenue service in 2020 following conditional acceptance and type testing.

Stadler’s U.S. contract came in 2002 with an order for 20 articulated GTW DMUs (diesel multiple-units) for by New Jersey Transit’s River LINE system. This was followed by an order from the Capital Metropolitan Transportation Authority (CMTA) in Austin, Tex., for six GTWs operating between the center of Austin and Leander. The CMTA fleet was delivered in spring 2008 and extended by an additional order of four vehicles in 2015. The Denton County Transportation Authority (DCTA), Texas, ordered 11 GTWs; they have served six stations in Denton County since 2012. In April 2014, the San Francisco Bay Area Rapid Transit District ordered eight GTWs for connected BART’s Pittsburg/Bay Point end station and Antioch beginning in 2017.In June 2015, the Fort Worth Transportation Authority ordered eight FLIRT DMUs for a new commuter rail service between Fort Worth and the northern terminus of the Dallas/Fort Worth International Airport.

In addition to the KISS contract with Stadler, Caltrain awarded Balfour Beatty a $697 million contract for electrification of the line at 25kV AC, and construction of two traction power substations, one switching substation and seven paralleling substations. Balfour Beatty will also replace signaling systems. This is the largest contract Balfour Beatty has won in the U.S. Work will start in the fall and is due to be completed in 2020.