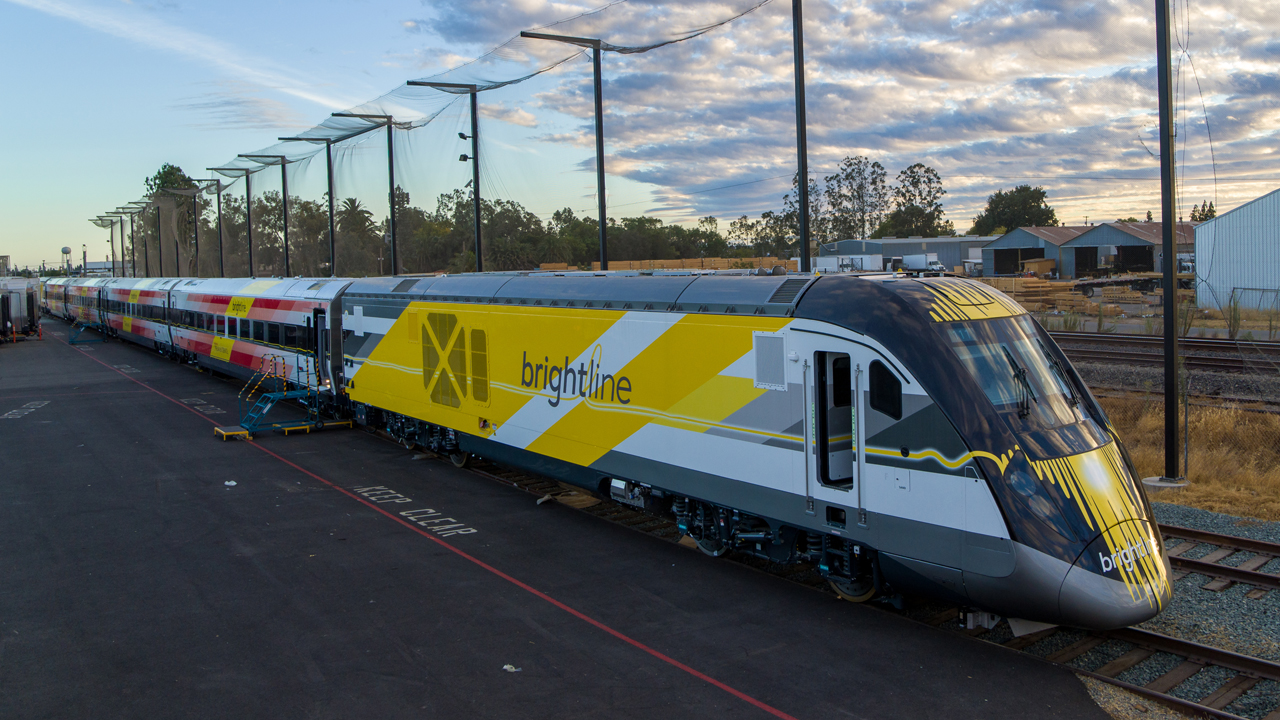 Brightline and Siemens Mobility on Sept. 28 celebrated the completion of Brightline's newest trainsets.

The newest Venture trainset for Brightline debuted Sept. 28 at the Siemens Mobility North American manufacturing headquarters in Sacramento, Calif.; it will depart for South Florida next week.

A second new trainset is expected to leave California a few weeks later and arrive in Orlando in mid-November.

The stainless-steel coaches feature components from more than 160 suppliers across 27 states, according to Brightline and Siemens Mobility. How are they different from the original cars purchased for the Miami-Fort Lauderdale-West Palm Beach line? Siemens Mobility tells Railway Age the “simple answer is that we have all opted to continue with the same recipe for success that was enjoyed with the launch fleet. The same great features continue, providing one of the most premium ridership experiences available today: extra wide aisles, superior accessibility throughout the train including the bathrooms, and luxe-seating with high-speed internet and top-class features to ensure a relaxed, comfortable experience whether working on the train—or simply enjoying the views!”

The Phase 2 order symbolizes “a multi-billion dollar commitment to American infrastructure,” Brightline said. It follows Brightline’s Phase 1 order for five trainsets (also consisting of four cars and two locomotives)—the first of which was unveiled in Florida on Jan. 11, 2017. The Phase 1 trainsets run along the 67-mile, three-station line from Miami to West Palm Beach, which launched in 2018 (see map below) and was suspended March 25, 2020 due to the pandemic. Service is set to resume in November.

All the new trainsets will operate along the current line and its Phase 2, 170-mile extension to Orlando, which is now more than 60% complete and slated to open in late 2022, according to Brightline. Total system ridership is projected to reach 6 million annually.

Brightline’s Phase 3 includes additional stations. Stations at Adventura (currently under construction) and Boca Raton are expected to open in second-half 2022; stations at PortMiami, Disney and Tampa are still in the planning stages.

On Sept. 28, Siemens Mobility and Brightline also reported that they are in discussions to supply the current Brightline technology solutions for the proposed higher-speed Brightline West, connecting Las Vegas and Los Angeles (see map above). Financing plans for the $8 billion project will be finalized within the next six months, according to a Bloomberg report released the same day. In June, Brightline decided not to seek state-based private activity bonds in 2021 to help finance construction of the 135-mile California line and 34-mile Nevada line.

“As the nation’s first and only private, operational high-speed rail line, Brightline’s partnership with Siemens demonstrates our company’s commitment to building both a robust domestic manufacturing sector and the future of green transportation,” said Brightline Holdings CEO Michael Reininger, who rejoined the company earlier this year. “Our partnership should serve as a powerful example of how we can break through the inertia and into an era of high-speed rail in America.”

“Brightline is a pioneer in private rail investment in the United States and we are proud to continue to grow our partnership as we ship the latest trainsets to Florida ahead of Brightline’s expansion,” said Michael Cahill, President of Siemens Mobility Rolling Stock in North America. “The Venture trainsets are a result of our collaboration and will offer a comfortable and enjoyable passenger experience that was built in Sacramento.”